Floridian Ballroom G, Lobby Level (Hilton Orlando Bonnet Creek)
N. Sekar (Nano Electrochemistry Lab, College of Engineering, The University of Georgia), Y. Umasankar, and R. P. Ramasamy (The University of Georgia)
Photosynthesis based energy conversion is an effective way of utilizing the most abundant solar energy for the benefit of mankind. Photosynthetic energy conversion processes have enormous potential towards energy and environmental sustainability. Among the various photosynthetic microorganisms, cyanobacteria possess exciting features for energy conversion. This study focuses on production of direct electricity from a cyanobacterium called Nostoc sp. (NOS). By illuminating with white light (of intensity 76 mW cm-2), the NOS immobilized on multi-walled carbon nanotubes (MWNT) modified electrodes generated a photocurrent density of 30 mA m-2 at an applied potential of 0.2 V (vs. Ag/AgCl). The contribution of different photosynthetic pigments of NOS to the photocurrent generation was analyzed by measuring the current density produced by MWNT/NOS upon illuminating with monochromatic lights of different wavelengths. Phycocyanin was found to be the major pigment greatly contributing to the photocurrent. Further investigation using a set of inhibitors1 revealed that the plastoquinones were primarily responsible for the electron transfer between the cyanobacteria and the electrode. Finally a rudimentary design photosynthetic electrochemical cell2 has been constructed with MWNT/NOS on the anode and MWNT/laccase on the cathode. The cell generated a maximum current density of 250 mA m-2 and a peak power density of 35 mW m-2 without any mediator. With the addition of benzoquinone as a redox mediator, the electricity generation capability was significantly enhanced to a current density of ~2300 mA m-2 and power density of 100 mW m-2, which is the highest among such systems reported thus far in literature. 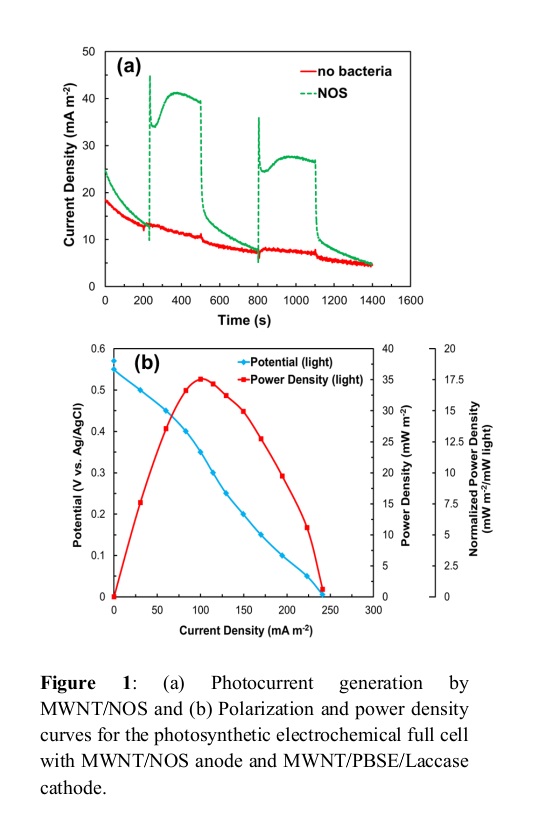