Floridian Ballroom F, Lobby Level (Hilton Orlando Bonnet Creek)
M. Sakthivel (DECHEMA-Forschungsinstitut), I. Radev, V. Peinecke (Zentrum für BrennstoffzellenTechnik), and J. F. Drillet (DECHEMA-Forschungsinstitut)
Sluggish kinetics of Pt catalyst for oxygen reduction reaction (ORR) and insufficient corrosion resistance of catalyst/support are major drawbacks that delay PEMFC and DMFC commercialization. Some Pt alloys such as PtCo, PtNi, PtCu, PtCr and PtFe have already shown an improved activity for ORR in phosphoric acid compared to that of pure Pt [1]. Both, electronic (shift of d-band center) and geometric (tensile/compressive strain) effects are supposed to be responsible for the increase in activity of Pt after alloying process. Addition of a second transition metal causes also changes of local bond, active site distribution and reactivity of Pt surface atoms for ORR. However, dissolution or/and segregation to the surface of the non-noble metal in the case of an alloy and core-shell structure, respectively affect the long-term activity of these systems. According to Mukerjee et al. [2], PtCr/C lies at the top of vulcano-type curves in which electrocatalytic activity of different Pt alloys (i900mV) was plotted against either electronic (Pt d-band vacancies per atom) or geometric (Pt-Pt bond distance) parameters. Surprisingly, despite of numerous promising results, little attention has been paid to PtCr alloy in the last decade.

In this work, activity and stability of PtCr/C were investigated under half-cell and full-cell conditions. The bi-metal catalyst was synthesized by co-reduction of hexachloroplatinic acid and chromium(III) nitrate hydrate in formaldehyde at 80°C for 1h. The nominal mass ratio of Pt:Cr was fixed to 3:1 and the total metal loading on carbon Vulcan to 40 wt%. The structural characterization of the as-prepared catalysts was performed by means of XRD, TGA, and TEM. Electrochemical activity of Pt-Cr/C catalyst was studied in O2-saturated 0.5 M H2SO4 electrolyte at room temperature by using a rotating disk electrode (RDE) cell. The total catalyst/support loading was about 80 μg cm-2. The electrochemical surface area (ECSA) of the catalyst was calculated by integrating the hydrogen desorption region in the cyclic voltammogramms at 40 mV s-1. Fuel cell experiments were performed in H2/air atmospheres with a 180 µgPt cm-2 anode catalyst and a Nafion HP membrane at 80°C. The cathode catalyst loading was 236 µgPtCr cm-2 for the MEA with the as-prepared PtCr/C and 360 µgPt cm-2 for the MEA with commercial Pt/C (JM). The accelerated degradation tests consisted of 7000 cycles in the half-cell and of 1000 cycles in the full-cell whereas 500 cycles were performed between 0.4 and 1.4 V and the last 500 cycles between 0.05 and 1.4V at dE/dt=1 V s-1. A commercial 40 wt% Pt/C catalyst from Johnson Matthey (JM) was used for comparison.

In half-cell experiments, PtCr/C exhibited twice higher ESCA-normalized specific activity (SA) and total catalyst mass-normalized activity (MA) for ORR at 850mV compared to that of the commercial catalyst (see values in Table 1). Some results regarding electrochemical surface area (ECSA) behaviour during accelerated degradation test (ADT) are shown in Figure 1. It can be seen that the initial ECSA of PtCr/C is 33% lower than that of Pt/C (JM) and the degradation rate after 7000 cycles is quite similar. TEM images revealed an increase in PtCr particle size from about 4.5 nm for the as-prepared powder catalyst up to 8-9 nm after 7000 cycles in the half-cell (see Fig. 1).

Table 1: Summary of the results

Excellent performances have been obtained in the full-cell with PtCr/C as cathode catalyst since effective Pt loading is 49% lower than that in the MEA with Pt/C (JM) (177 vs. 360 µg cm-2). The stability of MEA with PtCr/C cathode is remarkable as well, if compared to that one of the most performing available commercial catalyst (see Fig. 2). 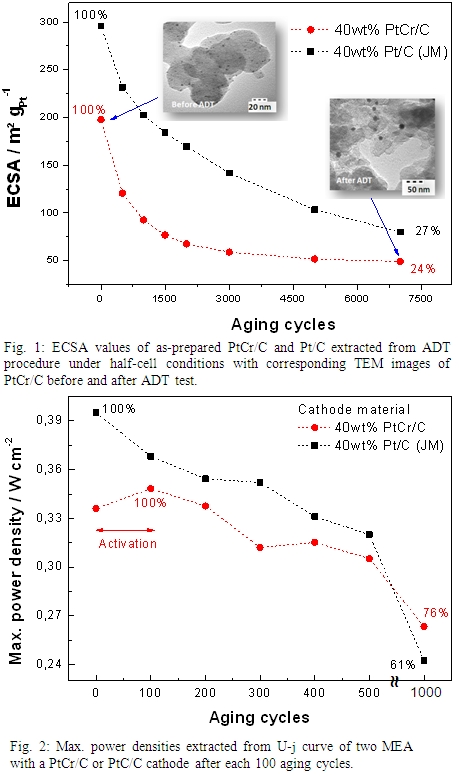