Grand Foyer, Lobby Level (Hilton Orlando Bonnet Creek)
M. Handayani, S. Gohda, H. Tanaka, D. Tanaka, and T. Ogawa (Osaka University)
Since Aviram and Ratner proposed that a single molecule could act as a molecular rectifier, containing a donor and an acceptor separated by a sigma bond, many such molecules have been synthesized for use in devices. Among these, porphyrins are widely used as molecular electronic devices owing to their structural flexibility as well as their well-developed synthetic chemistry, which allows their physical and chemical properties to be adjusted, making them ideally suited for binding to metals. In this research, porphyrin-imide dyads with perpendicular arrangements containing different metals (zinc and rhodium) bound to porphyrin molecules have been synthesized (Figure 1) and the effect of these “center metals” on the electrical properties of single molecule junction porphyrin-imides connected to SWNTs have been investigated.

DFT calculations for porphyrin-imide dyads revealed that the HOMO and LUMO energy levels of the dyads were completely separated, indicating the absence of any intramolecular interactions between the donor and acceptor. Furthermore, these calculations also revealed that the molecular orbital of rhodium porphyrin-imide for HOMO-2, HOMO-3, and LUMO-1 were entirely localized on the rhodium center, whereas no localization on the zinc center of the molecular orbital for zinc porphyrin-imide was observed. Based on these DFT results, it was predicted that employing zinc and rhodium as center metals would result in the corresponding dyads having different electrical properties.

The connection of single molecule junctions for porphyrin-imides linked covalently to SWNTs was evidenced by the coordination of the rhodium porphyrin-imide dyad with pyridine-tert-dodec-AuNPs (~3 nm in size) used as a marker. AFM topography was employed in order to confirm that the AuNPs were attached to the molecule. Moreover, the topography revealed the presence of particles with a height of 2.6 nm, which subsequent TEM observations revealed to be part of a single-molecule junction (Figure 2c). The electrical properties of these dyads were measured by point-contact current imaging atomic force microscopy (PCI-AFM). The results for the rectification behavior of single molecule junction zinc porphyrin-imide revealed larger values, with an average rectification ratio of 26, compared to the rhodium porphyrin-imide that had an average rectification ratio of 6. This differential conductance indicated that the HOMO-LUMO gap can be controlled by changing the center metal. 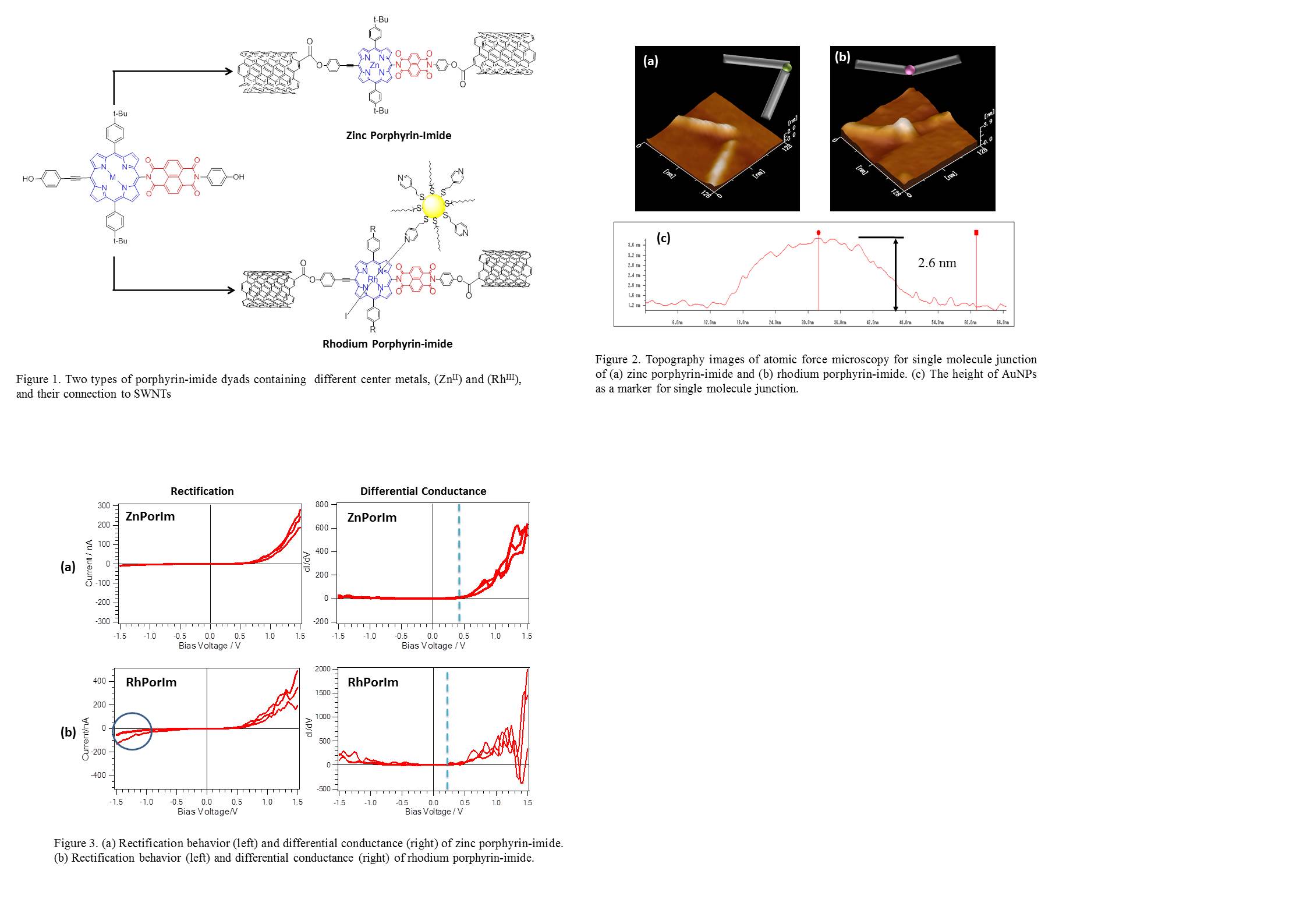