CNS was grown using RF-PECVD technique [1] onto both blanket 200 mm Si wafers coated with 70 nm thick PVD TiN, and wafer pieces with high-aspect-ratio Si pillars coated with 10 nm ALD TiN.  CNS was grown on TiN from CH4/H2mixture [1] to a height of approximately 1 µm.

Figure 1 shows SEM images of as-grown CNS (a) and EMD coverage as a function of deposition current  (b and c).  EMD is plated galvanostatically, and potential-time responses were analyzed to help optimize deposition parameters for desired film thickness and structural properties.  The analysis was based on the theories of galvanostatic nucleation and growth [2], and proposed reaction mechanisms during galvanostatic deposition of EMD [3].  Further surface area enhancement was attempted through EMD/CNS deposition on HAR Si pillars coated with 10 nm ALD TiN.  Figure 2 shows HAR ALD TiN/Si  pillars before and after CNS and EMD deposition, respectively.  CNS coating was applied to various ALD TiN/Si structures having different aspect ratios and spacing between pillars, and then followed by EMD deposition.

A typical Raman spectrum of our EMD/CNS structure, shown in Figure 3, contained broad features in the range 450 to 730 cm-1 where characteristic EMD peaks are expected [4 and references therein], and showed characteristic CNS peaks in 1000 to 3500 cm-1range [5].

Thanks to its sensitivity to local structure/symmetry Raman spectroscopy proved to be a useful tool for characterization of disordered and defective EMD.  We were able to detect EMD structural changes upon annealing at various temperatures and lithiation in anhydrous propylene carbonate solvent with 1 M LiClO4, and also monitor the effects of plating and post-plating processing on CNS. 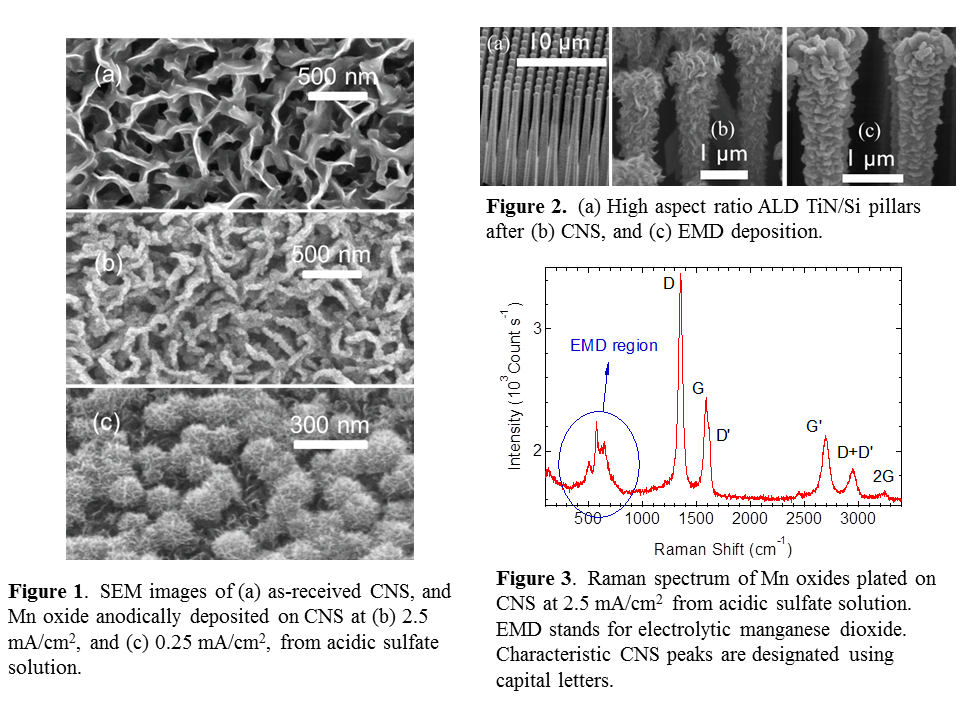