In this context, the present work focuses on the electrochemical deposition of manganese dioxide thin films  on high aspect ratio silicon pillar arrays coated with carbon as a technologically-relevant current collector and the investigation of their properties as positive electrode material for Li-ions batteries. As 3D electrode array, hexagonally arranged Si pillars of 2um in diameter and 2um spacing were etched 60um deep in the silicon by reactive ion etching (RIE) using a SiO2 hard mask. The pillars were coated with about 20nm TiN by atomic layer deposition (ALD), acting as diffusion barrier for lithium into silicon. Cases of conformal coatings of  electrolytic manganese dioxide (EMD) directly on the conductive TiN barrier were compared with seeded TiN / silicon pillars. In this respect, thin carbon coatings were evaluated as technological relevant alternative for platinum. For this, about 30nm of carbon  was grown on  ALD TiN / silicon pillars by chemical vapor deposition (CVD) from CH4/H2 mixture. The platinum seed films were made by ALD process. The electrolytic manganese dioxide (EMD) films were anodically deposited from an aqueous solution of 0.3 M MnSO4·xH2O + 0.55 M H2SO4. Since the oxidation of TiN takes place in the same potential region as does EMD deposition a protective layer such as platinum can be used to prevent TiN  from oxidation during the aqueous deposition of MnO2 [3]. Here we evaluated carbon as technologically relevant alternative. Figure 1 shows cyclic voltamogrammes for uncoated and carbon coated planar TiN substrates. The EMD film thickness on TiN is strongly limited due to oxidation of the TiN. The carbon successfully protects the TiN from oxidation such that much thicker films can be made similarly to what was found with Pt seed layers before [4].

After removing the water content in the films by thermal annealing, the electrochemical activity of EMD films was studied in propylene carbonate solvent with 1M LiClO4.
Reversible insertion and extraction of Li+ was observed. Electrochemical lithiation and delithiation experiments showed an improved cycle performance for carbon coated TiN substrates compared to Pt coated TiN substrates. The difference is attributed to decreased porosity (attachment) for the EMD to the C surface compared to platinum surface. The average lithium storage capacity for planar EMD films is about 50mAh/cm2 per mm (at 10mV/s comparable with charging rate of 20C). Based on a surface area gain of 28 for the 3D pillar structures, a capacity of 0.2mAh/cm2is expected for conformal coated 200 nm film at these high rates. 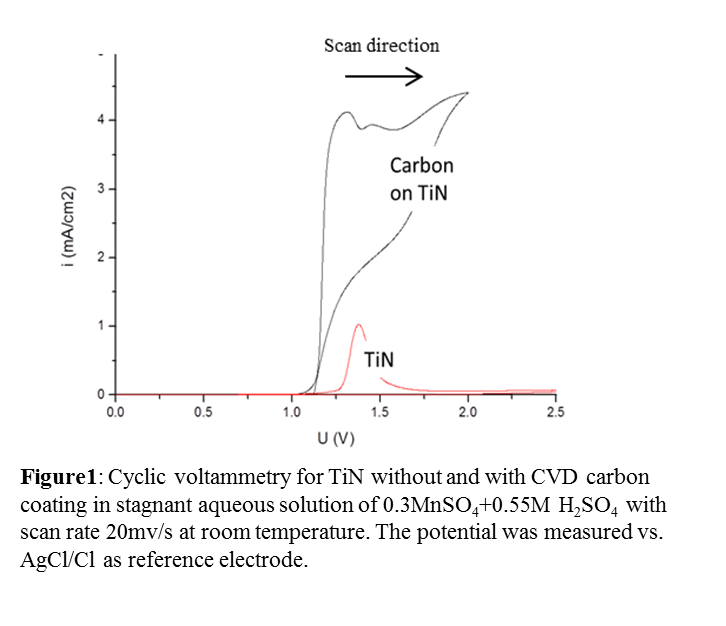