Grand Foyer, Lobby Level (Hilton Orlando Bonnet Creek)
J. C. Xing, Y. L. Zhu, Q. J. Jiao, and H. Ren (State Key Laboratory of Explosion Science and Technology, Beijing Institute of Technology)
Modern sophisticated weapon systems such as missiles, rockets and space aircrafts require thermal batteries of high energy and high power density, which makes NiCl2 a choice to replace disulfide as cathode material due to its high open circuit voltage and large discharge current density. Compared with bulk materials, nanomaterials are known to show superior electrochemical performance (1, 2) when they are pressed or sprayed onto the current collector acting as the electrodes. Ming (3) has synthesized nanostructured FeS2 power as the cathode material for Li-Si/FeS2 thermal batteries by a high-energy ball milling process. The results show that the nanostructured cathode pellets are 23% thinner than the micronscale counterparts leading to a 31% increase of pellet density, and the energy density of the nanostructured thermal batteries can reach 109 J g-1, two times higher than the conventional bulk materials (58 J g-1). Furthermore, nanorods such as NiO (4) have been successfully synthesized for other electronic applications exhibiting excellent electrochemical properties.

However, nano-NiCl2 materials have rarely been reported due to the difficult preparing technology and relatively high sublimation temperature. Besides, anhydrous NiCl2 powder is sensitive to moisture, which makes it agglomerate easily. It is noted that the electrochemical performances of the cathode materials for thermal batteries are strongly dependent on their sizes, morphologies and structures (5). Therefore, efforts must be devoted to synthesizing novel structure of NiCl2to improve the discharge properties and meet various requirements in possible application fields.

In our present study, highly uniform NiCl2 nanorods (see the inset in Figure 1(a)) with the diameter of approximately 100 nm and the length of 700 nm have been synthesized via a recrystallization method at ambient temperature and subsequent calcination at 300 oC for 4 h. In a typical procedure, crystalline NiCl2·6H2O was employed as the raw material, anhydrous ethanol as the solvent and acetone as anti-solvent. Compared with JCPDS card (No. 01-1134, space group: R-3m (166)), the characteristic peaks in the X-ray diffraction (XRD) pattern, as shown in Figure 1(a), can be assigned to (003), (101), (104), (009), (018), (113) and (205) planes, respectively. No other peaks can be found, indicating that the as-synthesized NiCl2nanorods are of high purity with a rhombohedral structure (see Figure 1(b)).

To evaluate the electrochemical performance of as-prepared NiCl2 nanorods, the cathode pellets were fabricated by compressing a mixture of 85 wt% NiCl2 nanorods and 15 wt% conductive carbon. The single-cell thermal batteries in sandwiched-structure were assembled in an Ar-filled glove-box, and then the discharge tests were carried out. For comparison, bulk NiCl2 materials were abtained by direct calcination of raw NiCl2·6H2O for the following measurements. Figure 2 shows that the battery with NiCl2 nanorods cathode can maintain 338 s at the current density of 500 mA g-1 until the voltage falls to 0.8 V delivering a capacity of 47 mAh g-1 and an energy density of 184 J g-1, while the battery of bulk NiCl2 cathode can only last for 265 s with lower voltage under the same conditons. With the current density incresing to 1000 mA g-1, the discharge time for the two cathodes are 150 s and 118 s, respectively. The reason of the voltage rise at the beginning of discharge has been investigating. 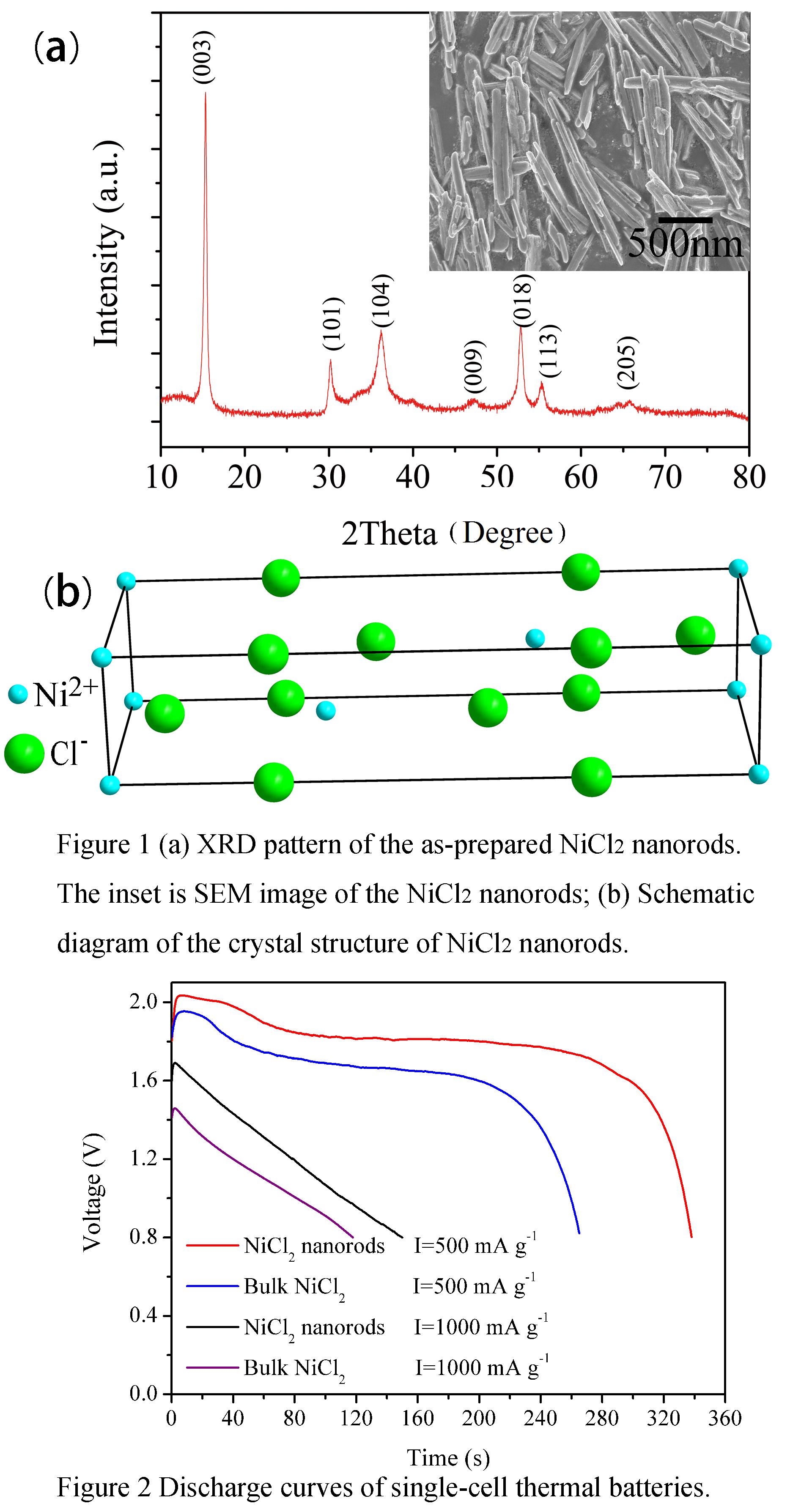