Grand Foyer, Lobby Level (Hilton Orlando Bonnet Creek)
O. O. Reid, F. S. Saleh, and E. B. Easton (University of Ontario Institute of Technology)
Typical catalyst layers (CL) employed in PEM fuel cells are composed of a carbon supported Pt catalyst bound together with an ionomer, most often Nafion. Both the carbon support and ionomer play a crucial role in optimizing the catalyst utilization by proving electronic and ionic conductive pathways, respectively, without hindering gas transport. Upon fuel cell operation, the catalyst layer can degrade by one of 3 primary pathways:

The contribution of each of these pathways depends upon CL compositions as well as the cell operating conditions.

The extent of degradation is normally monitored in situby cyclic voltammetry (CV) by measuring changes in the electrochemically active surface area (ECSA) of Pt. However, CV is limited in that it can only conclusively confirm the presence of the first pathway. Contributions from the other 2 pathways are typically confirmed by post mortem analysis of the CL.

We have recently reported that the addition of periodic electrochemical impedance spectroscopy (EIS) measurements to an accelerated degradation testing protocol (ADTP) allows one to clearly diagnose the presence of the other 2 degradation pathways. By performing EIS under conditions where the transmission line model is valid, the presence of carbon corrosion can be clearly detected by a characteristic shift in the EIS response over time [1], as shown in Figure 1. Likewise, the loss of ionic conductivity can also be observed through a unique change in a typical capacitance plot [2].

Our methodology has since been extended and further validated by studying the stability of numerous commercial and in-house prepared catalysts using with different carbon supports. In this presentation, we will describe how EIS can be incorporated into almost any ADTP protocol and how changes in the EIS response can be used for in situdiagnosis of degradation pathways that can be attributed to CL components. In particular we will describe how the presence and absence of both Pt and C impacts the degradation processes and subsequently the EIS response [3]. Furthermore, we will also demonstrate how by carefully selecting the DC bias potential one can quantitatively monitor ECSA degradation (pathway 1) with EIS (instead of CV) by using monitoring the pseudo-capacitance associated with H-adsorption (Figure 2) [4]. 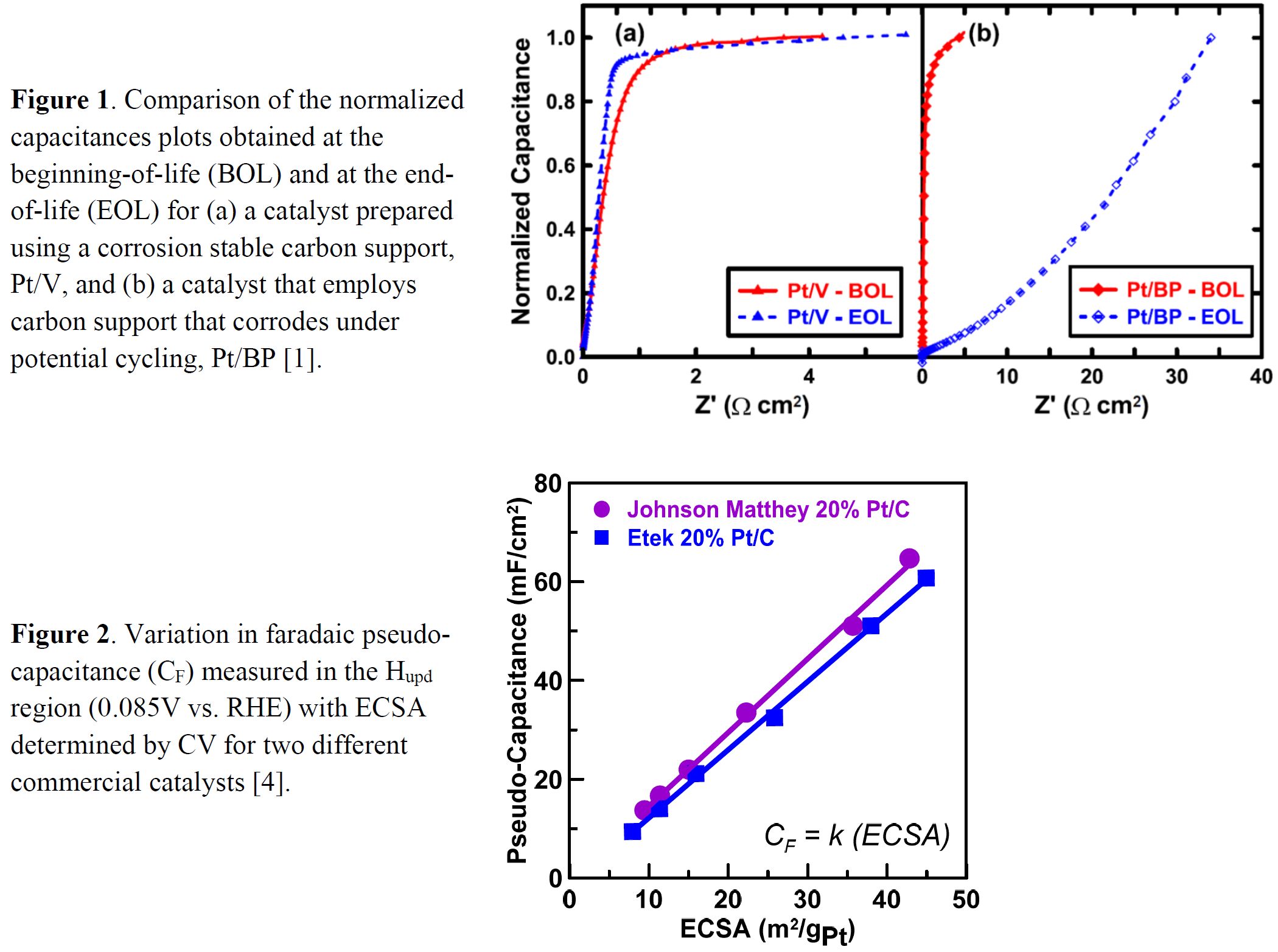