The state of the art for Mg electrolytes is mainly constituted by organo-Mg compounds; in general, they show good Mg deposition and dissolution performance, high Coulombic efficiency and in some cases a wide electrochemical stability window [2-3]. The main drawback of this class of materials is associated with their dissolution in ethereal-based solvents characterized by a high vapor pressure and flammability. Nevertheless, the use of high-boiling solvents is known to lead to: (a) a decrease in the electrolyte conductivity; and (b) a decrease in the electrode reaction rate, which limits their practical applicability [2].

Ionic liquids (ILs) are salts that are molten at room temperature [4]. ILs are also characterized by: (a) negligible vapor pressure; (b) high thermal stability; and (c) low flammability.

Only a few examples of the applicability of ILs as electrolytes for secondary Mg batteries are reported in the literature [5]. Several issues regarding the conductivity mechanisms, formation of the solid-electrolyte interface (SEI) and long-term performance of these systems are still open questions.

From a fundamental point of view, the interplay between the ILs nanostructure and the conductivity is a crucial point to clarify the effect of the IL matrix on the migration mechanism of Mg2+ ions.

The correlation between structure, thermal properties and conduction mechanism of the resulting EMImBF4/(δ-MgCl2)x and [EMImCl/(AlCl3)1.5]/(δ-MgCl2)x is investigated by a variety of techniques: (a) FT-MIR and FIR at different temperatures; (b) differential scanning calorimetry (DSC); and (c) broadband electrical spectroscopy (BES).

Figure 1 shows a plot of σDC of EMImBF4 vs. 1/T. The observed trend of σDC is strongly correlated to the thermal features detected by DSC. A decrease in σDC of six orders of magnitude is evidenced at temperatures higher than the crystallization temperature (Tc). This phenomenon is investigated as a function of: (a) Mg concentration; and (b) the different anions in the ILs.

BES measurements were undertaken to elucidate the electrical response of the electrolytes in terms of dielectric and polarization phenomena. At T < Tm (Tm = melting temperature) three dielectric relaxations are present, associated with the rotational motions of EMIm+ cations; at T > Tm, three and four interdomain polarization events are detected respectively for EMImBF4 and [EMImCl/(AlCl3)1.5]. These polarization events are associated with the presence of cation and anion nanocluster aggregates with different permittivities. 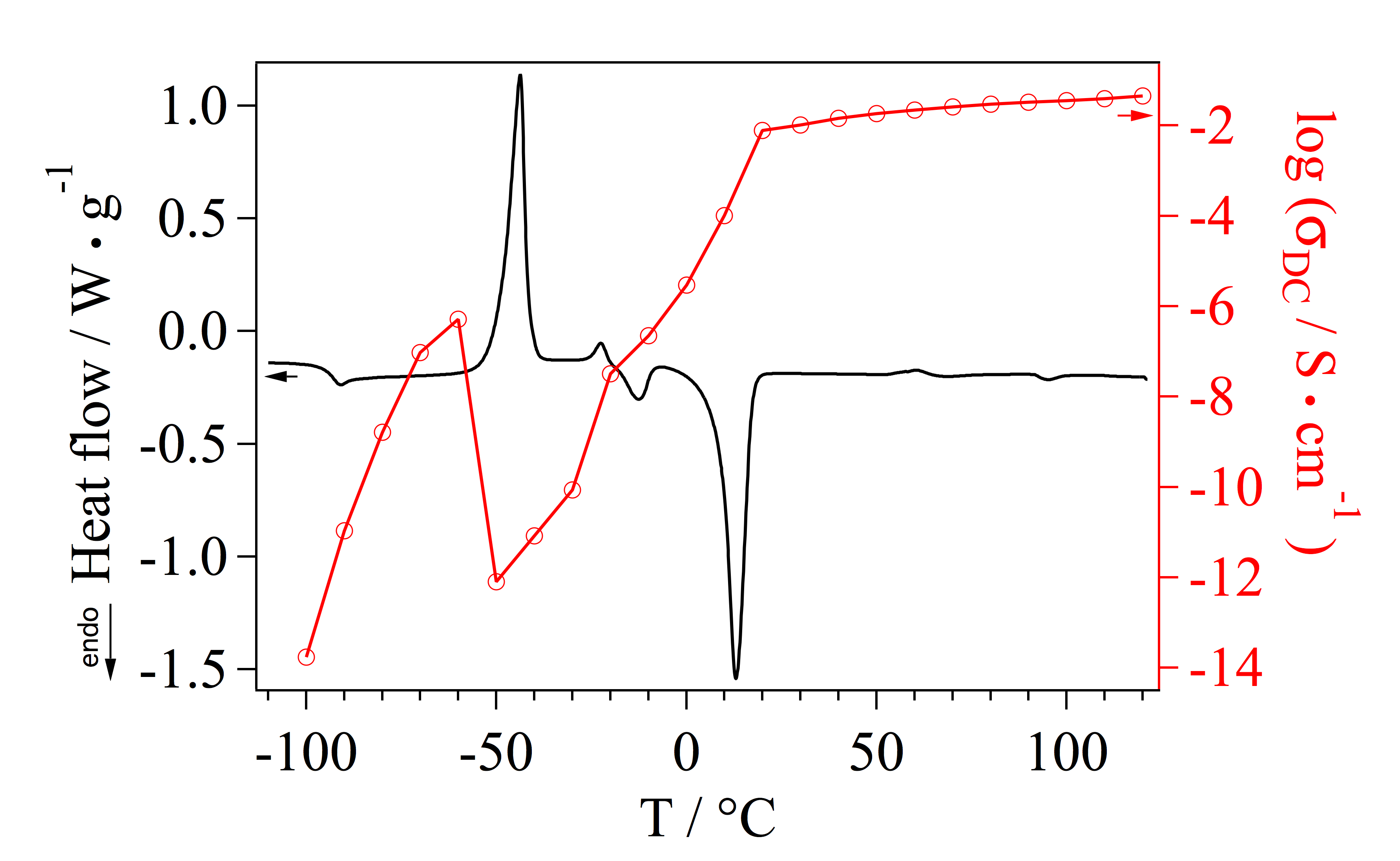