Bonnet Creek Ballroom I, Lobby Level (Hilton Orlando Bonnet Creek)
N. T. Hahn and K. R. Zavadil (Sandia National Laboratories)
The development of rechargeable Mg batteries, driven by the desire to surpass the limiting specific energy density of Li ion batteries, is currently limited by the lack of high voltage cathodes and stable, functional electrolytes.  Few electrolytes are capable of delivering the magnesium cation to the anode surface in a form that readily undergoes de-solvation and without formation of a cation blocking surface film. To date, successful reported electrolyte strategies take advantage of the creation of a magnesium ion complex where the cation traditionally is delivered through a Grignard reagent or MgCl2and more recently using organoborate or borohydride compounds. Generally not considered as significant is the existence of films on the magnesium surface that regulate the rates of charge transfer and metal accommodation. In this paper, we demonstrate the presence and impact of such surface films when halo-Mg complexes are employed.

The presence of a surface film raises questions concerning its properties and impact on electrochemical deposition/dissolution rates. We demonstrate that the surface film that forms in a 1 M Butylmagnesium chloride:Butyl diglyme electrolyte is electrically conductive. A freshly activated Mg surface is allowed to equilibrate for 0 to 30 min, during which film formation may occur, followed by deposition of a Mg adlayer.  Galavanostatic stripping of the resulting film (Figure 1b) demonstrates potentiometric signatures corresponding to adlayer dissolution (region a), film perturbation (region b), and underlying Mg substrate dissolution (region c).     The persistence of the now buried film, as evidenced by the large dissolution potential excursion at 120 s (the time required to strip the Mg adlayer at near 100% coulombic efficiency), demonstrates that Mg adlayer deposition and dissolution were accomplished without prior removal of the film.  Mg adlayer deposition and dissolution argues that the film is conductive since these electrochemical processes would be impossible at such modest overpotentials otherwise.

In this paper, we have extended this work to examine whether evidence of film formation exists for the broader class of MgCl2:Lewis acid supporting electrolytes. The absence of a strong reducing agent in the case of non-Grignard electrolytes raises questions of how residual water and oxygen impact the Mg deposition process and the cycling efficiency of Mg anodes as a whole. By visualizing Mg deposition in a range of halo-Mg electrolytes we attempt to understand how differences in surface film properties affect Mg nucleation, growth, and dissolution. 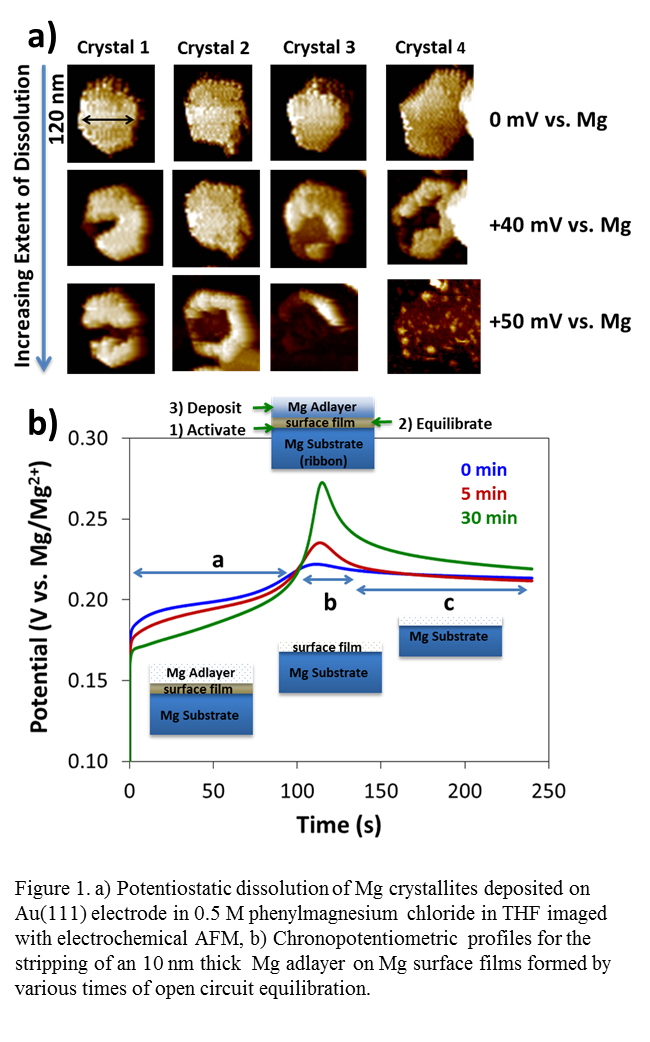