Recently, indium-gallium-zinc oxide (IGZO) thin film transistor (TFT) has attracted attention for their applications to active matrix liquid crystal display and active matrix organic light-emitting diode. As a typical IGZO TFT, the Si3N4/SiO2 structure has been widely developed. To archive the requirements of a low leakage current and a high k value, several high-k dielectrics, such as Al2O3, HfO2, Ta2O5, ZrO2 and Y2O3 have been intensively investigated as gate dielectric [1-3].

Hence, we paid attention to the Al2O3 as gate dielectrics because of its low leakage current. However, it is well known that Al2O3 film, which fabricated by conventional ALD at low temperature, contains some defects [4] and results in mobility degradation and abnormal threshold voltage (Vth) shift. Plasma-enhanced ALD (PE-ALD) is expected to reduce impurities and increases the film density because of oxidation reaction.

In this paper, we report on electrical performance of IGZO TFTs with Al2O3 dielectrics grown by PE-ALD process. We especially discuss about influence of quality of Al2O3 films on transistor properties.

Bottom-gate-type IGZO TFT with Al2O3 dielectric was fabricated as follows. A 30-nm-thick SiO2 layer was fabricated on p++-Si as a back gate electrode. Next, the Al2O3 layer was deposited on SiO2/Si substrate by the PE-ALD method at 300 °C using TMA precursor and plasma oxygen gas. The thicknesses of the Al2O3 were varied to 5, 10, 15 and 25 nm by changing ALD cycles. A 50-nm-thick IGZO layer was subsequently deposited at room temperature by DC-sputtering using an IGZO target (In2O3:Ga2O3:ZnO = 1:1:1 mol%). Finally, the Au (100 nm) layers as source/drain electrodes were deposited by thermal evaporation method. The channel length and width of the TFTs are 50 and 1200 mm, respectively. Post annealing was performed at 300 °C for 1 h.

In addition, Pt/Al2O3/SiO2 MOS capacitor was prepared to examine quality of Al2O3 film. A 4-nm-thick SiO2 layer was fabricated on p-Si substrate, and subsequently Al2O3 films with 5-25 nm thicknesses were deposited by PE-ALD at 300 °C. Finally, Pt electrode (150 nm) was deposited on Al2O3 films by DC-sputtering.

The Vfb change as a function of the equivalent oxide thickness (EOT) of the Al2O3 films for Pt/Al2O3/SiO2 MOS capacitors is shown in Fig. 2. It is clear that these data satisfy the linear equation. This indicates that the fixed charge in Al2O3 film, which deposited by PE-ALD process, is a negligible small. The fixed charge (QIL) at Al2O3/SiO2 interface can be obtained the following equation:

where fm,eff, fSi, eSiO2 and EOTAl2O3 are the effective work function of the gate electrode on Al2O3, the Fermi-level of silicon substrate, the dielectric constant of SiO2 and EOT of Al2O3 film, respectively. The QIL value was estimated about -2.0 × 1012/cm2.

Hence, when the fixed charge is assumed to occur at SiO2/Si interface for Metal/SiO2(30nm)/Si capacitor, the QIL value of -2.0 × 1012/cm2 leads to positive Vfb shift of 1.5V. We notice that the positive Vth shift of ~1V in the TFTs with Al2O3 dielectrics might be due to the fixed charge at Al2O3/SiO2 interface.

Fig. 1 Id-Vg characteristics of the IGZO TFTs with and without Al2O3 gate dielectrics.

Fig. 2 The Vfb change as a function of the EOT of the Al2O3 films for Pt/Al2O3/SiO2 MOS capacitors. 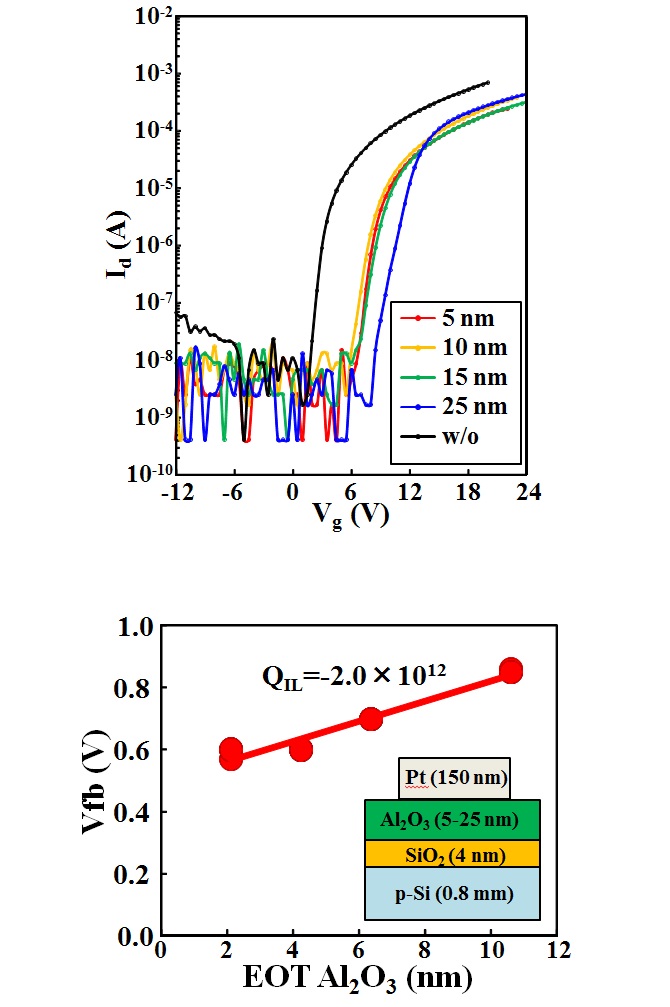