Orange, Ground Level (Hilton Orlando Bonnet Creek)
S. J. Ambrozik (Department of Chemistry, SUNY at Binghamton), N. Vasiljevic (School of Physics, University of Bristol), and N. Dimitrov (Department of Chemistry, SUNY at Binghamton)
The deposition of thin noble metal films is an area of wide interest for many different industrial applications.  These films allow for an application to take advantage of the beneficial properties of said metal of interest while minimizing cost.  Thusly, thin films are currently being applied as low-cost, high-activity fuel cell catalysts, photovoltaic semiconductors, and protective coatings in circuitization of electronic devices.

Surface limited redox replacement (SLRR) is a technique that has been applied to depositing ultra thin films of metals and alloys and has also shown the ability to grow epitaxial metal layers utilizing the monolayer limited nature of underpotential deposition (UPD).  In SLRR an UPD monolayer of a sacrificial element is formed via a potential pulse.  This layer is sequentially replaced by a more noble metal at free corrosion conditions. This sequence of events ultimately yields the deposition of one layer of the more noble metal 1.  This technique can be then applied to subsequent events resulting in perfectly controlled layer by layer metal growth 2-6.

During SLRR the potential pulse that is applied to form the UPD layer has conventionally been performed by an external power device (potentiostat).  In this work instead of the application of external power, a corrosion pair scenario is realized in a three-electrode configuration with a Pb wire in solution serving as the “executive” electrode, a Hg/Hg2SO4 reference electrode and a Au polycrystalline disc used as working electrode.  The difference in equilibrium potentials of the executive and working electrode coupled with specific aspects of the kinetics of the Pb-Au corrosion pair allow for efficient control of the potential applied to the Au substrate. More specifically, electrical contact between executive and working electrodes results in the application of a potential to the Au electrode, nearly identical to the Pb equilibrium potential. This ultimately leads to the formation of a sacrificial Pb UPD layer on the Au surface. Subsequent disconnection of the electrical contact allows for the electroless, in nature, SLRR to occur.  This technique can consequentially be used to coat a substrate metal surface with another metal or alloy of interest as illustrated in Figure 1.  In the present report, the proposed approach has been applied to an ideal system in the plating of Ag on Au in order to ascertain the protocol’s applicability for metal deposition.  The work has also been extended to the industrially more relevant system of Pt on Au. Adopting the herein presented routine, SLRR can be simplified and prove even more cost effective with no need for external power source and little to no energy cost, ultimately improving industrial viability. 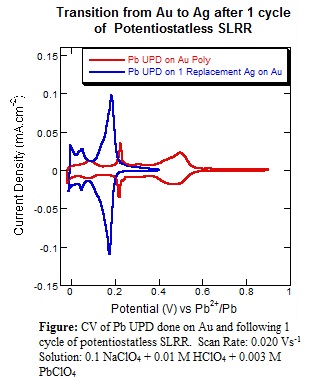