Grand Foyer, Lobby Level (Hilton Orlando Bonnet Creek)
A. K. Evseev, M. M. Goldin, A. A. Stepanov, A. V. Pinchuk (N.V. Sklifosovsky Research Institute for Emergency Medicine, Russia), A. D. Davydov (A.N. Frumkin Institute of Physical Chemistry and Electrochemistry RAS, Russia), M. Mirzaeian (School of Engineering, University of the West of Scotland, UK), and M. M. Goldin (Department of Biology and Chemistry, Liberty University, USA)
Presently, no known prognostic methods are capable of predicting recovery outcome in postoperative treatment of transplant patients. It is well known that the equilibrium between active oxygen forms and antioxidants in the blood reflects the condition of the organism to a certain extent. It is also known that acute pathological states can cause an imbalance of pro- and antioxidants in the blood [1]. From an electrochemical viewpoint, the ratio of overall oxidant and antioxidant activities can be described by the Nernst equation (Eq. 1):

Therefore, changes in the open-circuit potential (OCP) of the platinum electrode immersed in blood or blood plasma can be used as an indicator of the redox properties of the above biological media. The interrelation of Pt OCP in biomedia and the presentation of certain pathological conditions in the patient has been established; other data reveal the correlation of the OCP with biochemical parameters of blood, such as the partial pressure of oxygen (pO2) in it or the “middle molecule” toxicity assay.

As we have previously shown, changes in Pt OCP in blood plasma must be monitored continuously in the course of measurement, whereas literature OCP were reported as discrete values. Quite importantly, patient condition monitoring revealed significant correlations with Pt OCP changes in blood serum [2].

The goal of the present work was to identify diagnostic and prognostic criteria for the monitoring of recovery of kidney and liver transplant patients by means of Pt OCP measurement in blood plasma.

Measurement of the time dependence of platinum electrode OCP while immersed in the investigated medium (blood plasma) was recorded with a microcomputer-controlled IPC-Compact potentiostat (NTF Volta, Ltd.) against the silver/silver chloride electrode. Prior to each measurement, the platinum electrode was pre-treated according to the method described in [3]. The duration of each Pt OCP time dependence measurement was 15 min. A control group of 63 apparently healthy subjects aged 19-40 was used, comprising 46 male and 17 female subjects. The experimental group comprised 59 kidney transplant patients (42 male, 17 female) and 64 liver transplant patients (40 male, 24 female). Statistical analysis of the data was performed using the STATISTICA 6.0 software package (StatSoft).

A comparison of Pt OCP values in the blood plasma of apparently healthy subjects over against those of kidney and liver patients with unremarkable recoveries (i.e., who did not experience complications) revealed that the OCP range of such transplant patients was more positive, as compared with values for essentially healthy subjects (Table 1).

A comparison of Pt OCP in blood plasma of apparently healthy subjects and patients presenting with postoperative dysfunctions of the transplant showed a significantly greater positive shift of OCP values, as compared with transplant patients whose recovery was unremarkable (Fig. 1).

Thus, the analysis of a statistically significant sample of the patient population has shown that the Pt OCP values in blood plasma are more positive in transplant patients, as compared to those in apparently healthy subjects. Since the Pt OCP in blood plasma is much more positive for patients with postoperative transplant dysfunction than for the unremarkable recovery group, it appears possible to predict the likelihood of dysfunction onset based on the measured Pt OCP: OCP values more positive than 0.0 mV indicate an imminent threat of dysfunction onset in a transplant patient. 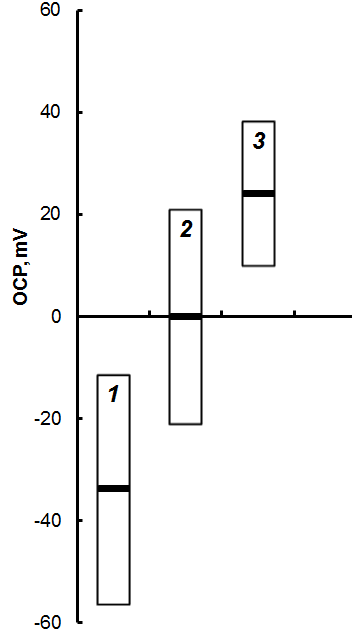