Recently published studies have shown that there is a complex relationship between a lithium ion and its solvent molecules in  two-solvent electrolyte systems. Cyclic carbonates like ethylene carbonate are stable in the Li+ solvation sheath while linear carbonates like dimethyl carbonate move in and out frequently, reflecting a difference in coordinating stability with Li+. Because of this bias in Li+ coordinating ability, a correlation can be drawn between the composition of the Li+solvation sheath and the resulting composition of the passivating solid electrolyte interphase that forms on the graphitic anode of a Li-ion battery during the first charge.

Our previous work indicated that although typical electrolyte anions are poorly coordinated, both PF6- and BF4- showed a preference for the low-permittivity linear carbonate ethyl methyl carbonate over the high-permittivity solvent ethylene carbonate. The PF6-results are summarized in Fig. 1. This result spurred further investigation into the solvation condition of the anion, accomplished using electrospray mass spectrometry, linear voltammetry, x-ray photoelectron spectroscopy, and density functional theory simulations of anion-solvent cluster stability.

We will attempt to show a correlation between the stability of anion-solvent clusters with the composition and formation of the cathode interphase layer. 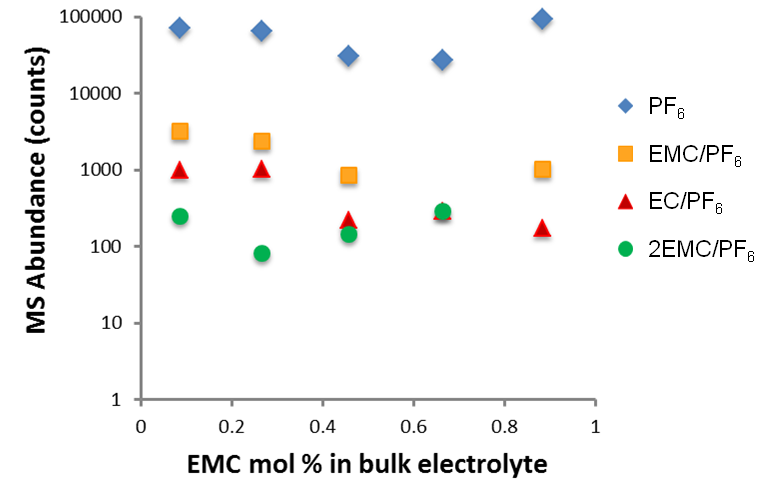