Grand Foyer, Lobby Level (Hilton Orlando Bonnet Creek)
X. Z. Yuan (National Research Council Canada), Z. Xie (Energy, Mines & Environment Portfolio, National Research Council), D. G. Ivey (University of Alberta), and W. Qu (National Research Council Canada)
Over the past two decades, room temperature ionic liquids (RTILs) have attracted the attention of chemists around the world due to their inherent properties, such as wide electrochemical window, negligible vapour pressure and thermal stability, making them promising alternatives as unreactive, stable electrolytes in the development of electrochemical devices like fuel cells and batteries. Unfortunately, the literature shows that the oxygen reduction reaction (ORR) in RTILs is extremely slow due to sluggish kinetics and diffusion [1]. Most of the literature on ORR in aprotic ionic liquids reports limited one-electron processes with small current densities in the ~0.5 mA cm-2range. Switzer et al. [2] examined the effect of proton donors on ORR in 1-butyl-2,3-dimethylimidazolium trifluoromethanesulfonate (BDMI-TF). They found that the addition of proton species significantly increased ORR activity (almost 30 times) for both Pt and glassy carbon (GC) electrodes, with ORR approaching a four-electron pathway on Pt and a two-electron process on GC. However, they had to perform all the experiments at 50°C since BDMI-TF is solid at room temperature. It is of interest to extend the benefit of adding proton source to actual RTILs for both academic research and practice. In this context, the present work studied the ORR at room temperature in an RTIL containing a triflate anion, i.e., 1-ethyl-3-methylimidazolium triflate (EMI-TF), with addition of triflic acid (HTF) as a proton species.

The electrochemical experiments adopted a 3-electrode cell configuration. A Pt/GC (glassy carbon) electrode (~1.6 mm in diameter, MF-2013 BASi) was used as the working electrode and a Pt wire (~0.5 mm in diameter, MW-1032 BASi) was used as the counter electrode.  The reference electrode was assembled with a Pt wire inserted in a glass tube filled with the studied ionic liquid solution containing 50:50 mol% Fc/Fc+as the internal potential standard. During testing, the solution was continuously purged with nitrogen or oxygen.

Fig. 1 Compares cyclic voltammetry (CV) curves at the Pt electrode in HTF added EMI-TF in N2 and O2 atmospheres, respectively. Under a N2 atmosphere, the reduction peak occurring at around -1 V vs. Fc/Fc+ at the Pt electrode can be ascribed to the hydrogen evolution reaction (HER), which increases with increasing HTF concentration.  In an O2atmosphere, both HER and ORR occur and the two peaks overlap for the Pt electrode. However, on the negative scan ORR occurs earlier than HER. In the presence of oxygen, HTF contributes to the HER current increase and to the positive shift of the ORR onset potential. At a concentration of 0.1 M, the ORR onset potential shifts positively by almost 1 V. On Pt, adding HTF is beneficial for ORR improvement, however, it is accompanied by the HER.

In an attempt to separate the ORR and HER, CV curves were obtained for the GC electrode, and are compared in Fig. 2. As can be seen, HER occurs at a much more negative potential. In this case, ORR itself can be compared in the O2atmosphere without interference from the HER peak.  On the GC electrode, with addition of HTF, ORR current slightly increases while the onset potential does not move in the positive direction as it does on Pt.  This indicates that the effect of the proton species differs depending on the electrode. For both electrodes, ORR becomes irreversible when HTF exceeds a certain level, indicating that proton readily reacts with the superoxide.

Using Gaussian09, Mulliken charges of carbon and nitrogen atoms in various cations of ionic liquids containing triflate anion were calculated. The results, shown in Fig. 3, demonstrate that EMI+is the least stable cation among all the selected cations in the presence of superoxide.

In summary, unlike BDMI-TF, in which the addition of proton species significantly increased ORR activity on both Pt and GC electrodes, ORR onset potential shifts positively on Pt and ORR current increases slightly on GC in EMI-Tf. This is likely related to the instability of the cation in the presence of superoxide. 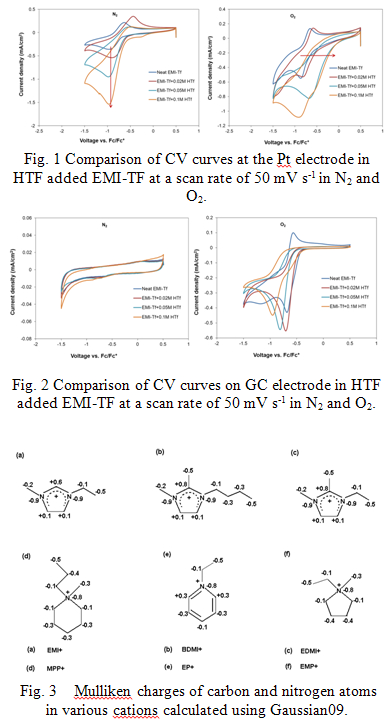