Bonnet Creek Ballroom VI, Lobby Level (Hilton Orlando Bonnet Creek)
N. V. Nguyen (Physical Measurement Laboratory, NIST, Gaithersburg, MD, 20899) and W. Li (Key Laboratory for Physics and Chemistry of Nanodevices and department of Electronics, Peking University, Beijing, 100871, China)
The electrical performance of a tunnel field effect transistor (TFET) depends critically on the band offset at their semiconductor heterojunction. Historically it has been rather difficult to experimentally determine how the electronic band is aligned at the interface.  In this talk, I will present and discuss an experimentally unique measurement design to ascertain a complete energy band alignment of the heterojunction using internal photoemission (IPE) spectroscopy.  Examples of all three types (I, II, and III) of the band alignment of technologically relevant TFET heterojunction will be presented.

Due to small band offsets, IPE usually requires high intensity light sources such as free-electron laser which is not easily accessible.  However, it will be shown by using conventional IPE with an experiment procedure that was specifically designed and tailored to enhance sensitivity of electron photoemission from each semiconductor component of the heterojunction over a large band gap insulator, we were able to successfully characterize band alignments of W / Al2O3 / InGaAs / InAs / InP and W / Al2O3 / n+-InAs / p+-Al0.45Ga0.55Sb TFET heterojunction [1].  In both cases, the measurement technique was possible only when the larger band gap semiconductor is on top of the other with the thickness of each layer that was specifically designed to control light absorption and penetration depth.  As a results, at the oxide flat-band condition, the barrier height from the top of the InGaAs/InAs valence band and the top of the InP valence band to the bottom of the Al2O3 conduction band is determined to be 3.5 and 2.8 eV, respectively, resulting a 0.7 eV valence band offset at InGaAs / InP interface (Fig. A) . Similarly, for W/ Al2O3 / n+-InAs / p+-Al0.45Ga0.55Sb  structure,  a 0.4 eV valence band offset at the n+-InAs / p+-Al0.45Ga0.55Sb  interface was observed (Fig. B).

We have further advanced the method to a more elaborate approach which simultaneously resolves both valence and conduction band offsets at the heterojunction interface without the required layer configuration used in the above case of InGaAs/InAs and InAs/p+AlGaSb. In the traditional IPE measurement, the hole photocurrent (if present) from semiconductor is negligible compared to the electron photocurrent from the semi-transparent gate (usually a thin metal) due to the much lower quantum yield for hole emission. Recently, we first reported using graphene as transparent electrode to measure the hole photoemission [2]. The two main reasons for graphene as transparent electrode to enhance the hole photocurrent and make it measurable are as follows. First, the high (~97.7%) broad range light transmittance of graphene allows most of the light to reach to the emitter and thus increase external quantum efficiency of the hole emission.  Secondly, the availability of large area graphene and its high conductivity make the collection of the emitted carriers more efficient. This new method is demonstrated on a broken gap (type III) InAs / GaSb TFET.  The barrier height from the top of InAs and GaSb valence band to the bottom of Al2O3 conduction band is inferred from electron emission whereas hole emissions reveal the barrier height from the top of Al2O3 valence band to the bottom of InAs and GaSb conduction band.  As a result, the offset at the broken gap InAs / GaSb interface was uniquely determined and is summarized in Fig. C.

This new IPE approach can be extended to determine band alignment of the other technologically relevant heterojunction and 2-dimentional materials as well. 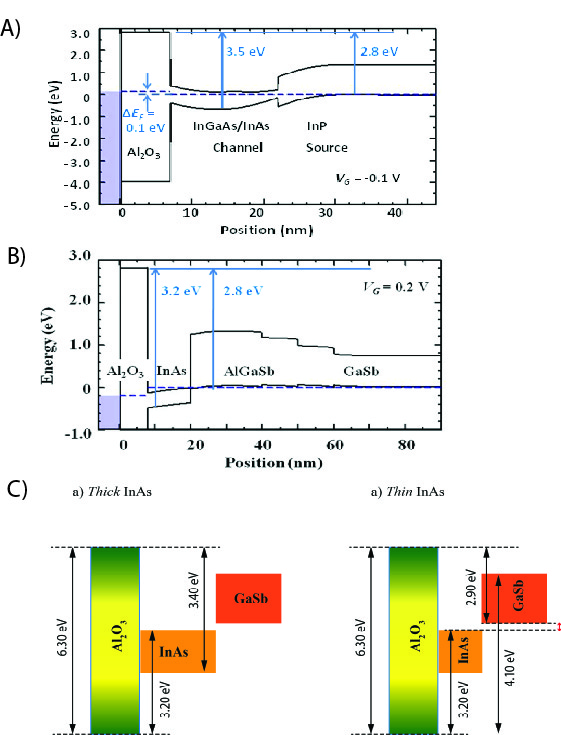