Bonnet Creek Ballroom VIII, Lobby Level (Hilton Orlando Bonnet Creek)
V. Chakrapani (Renssalaer Polytechnic Institute)
The conductivity of semiconducting, single-walled carbon nanotubes (SWCNT) is a sensitive function of small concentrations of O2, NO2, NH3, and O3.1-5  The cause of this effect is not well understood.  We present evidence that these observations are consistent with charge transfer between the SWCNT and the oxygen redox couple in an adsorbed water film.

Experimental:  We observe an increase in conductance and a change in conductivity type from n-type to p-type when vacuum-annealed SWCNT are exposed to humid air.  Exposure to the basic gas, NH3, restores n-type conductivity.  See Fig. 1.

Electrochemical Transfer Doping  The results are explained by charge transfer between the semiconductor and the oxygen redox couple in an adsorbed water film.

Discussion:  The electron affinity of the oxygen redox couple ranges from 4.83 at pH =14 to 5.66 eV at pH = 0, which makes the energetics favorable for electron transfer to the redox couple from SWCNT at low pH.  On the other hand, the electron affinities of molecular O2, N2O, NO2 and O3 are respectively 0.451, 0.22, 2.273 and 0.451eV, which mean that electron transfer directly to these molecular species is unlikely.  Furthermore, the Fermi energy of graphene has been estimated to be 4.46 eV below the vacuum level,7which is close to the range of the oxygen redox couple and therefore may be influenced by changes in the ambient.

Summary: Electrochemically mediated charge transfer appears to be a very general phenomenon that has often been unrecognized.8-10  The effect has been found in GaN and ZnO where it affects the luminescence properties.9 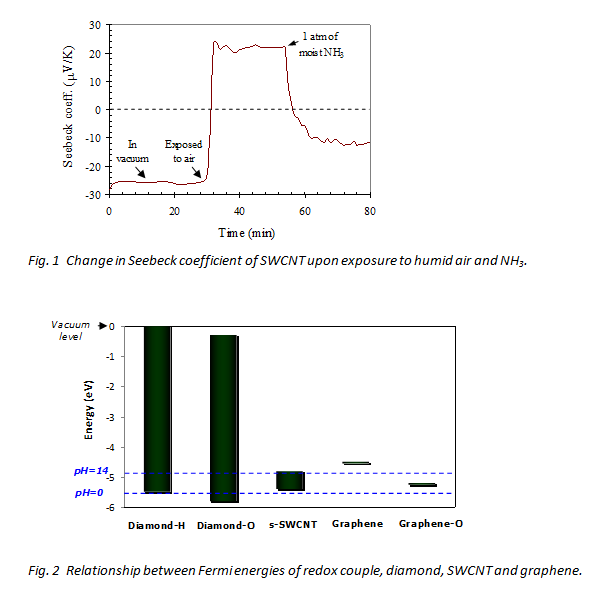