Nassau, Ground Level (Hilton Orlando Bonnet Creek)
L. Hao and C. Y. Wang (The Pennsylvania State University)
The two-phase Darcy’s law coupled with continuous capillary-pressure is widely used in macroscopic models of PEM fuel cells [1]. However, the validity of the capillary-pressure continuity at the GDL/MPL/CL interfaces is still an open question, due to their vastly different properties (porosity, permeability and contact angle) in these porous layers. As seen in Fig.1, capillary-pressure continuity will result in much smaller water saturation in CL and much higher saturation in MPL and GDL when the three layers have the same wettability. On the other hand, opposite wettability of the contacted two layers will lead to unity and zero saturation in hydrophilic and hydrophobic layer, respectively. Obviously, neither of the above saturation distributions are confirmed by experiments. Recently it has been suggested that the continuity of the capillary pressure may be valid when the two contacted layers have similar pore size [2].

In the present work, we propose a new approach to study the interfacial water behavior at the GDL/MPL/CL interfaces in a PEM fuel cell. Porosimetric measurements and SEM images show the mean pore size in GDL about 20-40 times larger than in MPL, and the pore size in MPL about 10-20 times larger than in CL [3]. As for such large pore size difference, it is safe to assume that the MPL pores are sufficient small and the GDL pores are infinitely open at the GDL/MPL interface, as well as MPL/CL interface. In Fig.2, cubic pores and sphere packing pores are assumed in GDL and MPL, respectively. The relationship between water coverage on MPL (CL) surface and water saturation in GDL (MPL) interfacial pore is obtained by geometric analysis. In addition, pores in GDL and MPL have mixed wettability. For simplicity, we further assume that the water droplet will not be influenced by the sidewalls in hydrophobic pores (as shown in Fig.2) and will completely adhere to the sidewalls in hydrophilic pores. As a result, a macroscopic relationship between the water coverage sc on finer layer surface and water saturation sint,p in interfacial pores in coarse layer is obtained as a function of hydrophilic pore fraction x,

The expression of the function f(sint,p)for hydrophobic pores can be found in Fig.2. Fig.3 shows the relationship curves of the interfacial saturation at the GDL/MPL and MPL/CL interfaces with two different contact angles of finer layer surface. This new proposed interfacial model predicts more reasonable water distribution at the GDL/MPL/CL interfaces, and is used in multiphase mixture model of PEM fuel cells to study the water transport and mass transfer limitation in several cases. 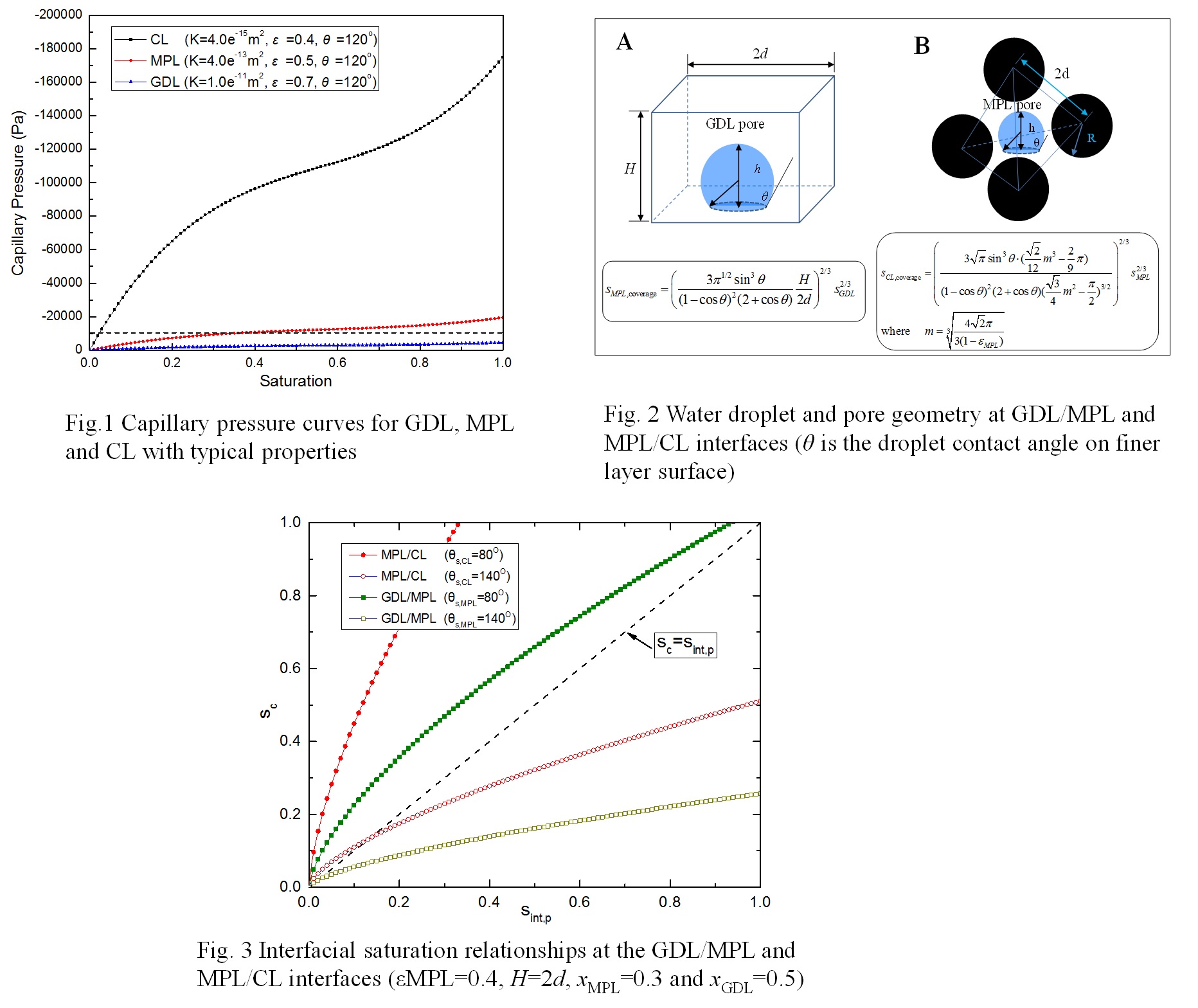