However, given the harsh environments inherent in propulsion systems, the development of engine-compatible  electronics for engine applications  is not straightforward. The use of sensors and complex electronics in these environments implies operation at temperatures above 300°C. While silicon integrated circuits (ICs) have enabled complex, room-temperature circuits to be miniaturized onto small chips, the extension of this technology to temperatures above 300 °C appears impractical. However, silicon carbide (SiC) electronics have the potential to meet a range of engine application needs [3]. Operation at 500°C has been demonstrated for thousands of hours; these time frames are now viable for implementation to engine conditions for extended periods. This would allow high temperature signal processing at temperatures far beyond that capable in silicon electronics [4].

This paper discusses the demonstration of a first generation high temperature wireless system that includes basic components of a Smart Sensor System including a pressure sensor, circuitry, power scavenging, and an antenna operating at a range of temperatures up to 475ºC. The various components of the system included a capacitive pressure sensor, a silicon carbide field effect transistor, passive components such as resistors and capacitors, and a thin film antenna. These components were integrated onto a single alumina substrate and this unit was mounted in a pressures chamber with a quartz window through which data was transmitted from high temperature to ambient conditions. Power was provided predominantly by power scavenging at temperatures of 300°C. The power scavenging modules were located separately from pressure sensor/telemetry due to size restrictions in the pressure chamber. High temperature wireless transmission at a distance of 1 meter using this approach was demonstrated at 475º C from 70-100 psi for more than one hour with a response curve shown in Figure 1.

This work is intended to be a building block towards enabling more complex, integrated high temperature Smart Sensor Systems that can be applied in a range of harsh environment applications. This paper will also give a brief overview of the status of high temperature electronics and its use and applications ranging from distributed engine control to Venus seismometry. 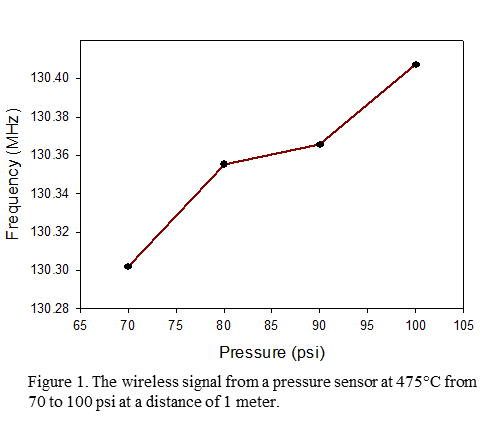