Manatee, Ground Level (Hilton Orlando Bonnet Creek)
T. S. Kang, D. Cheney, B. P. Gila, F. Ren, and S. J. Pearton (University of Florida)
AlGaN/GaN high electron mobility transistor (AlGaN/GaN HEMT) has attracted considerable interest as high power electronics for use in the electric utility industry, defense and space applications, and hybrid vehicles.  However, the impact ionization in gate-to-drain region induced by hot electrons causes serious issues such as carrier trapping, gate leakage, and efficiency degradation. Many researches have studied the location and properties of these traps, however, to separate out trap population and trap energy tends to be rather tedious task.  We have created a characterization system that employs below bandgap illumination to effectively separate trap energy and population.

We investigated the traps affecting 2DEG density in AlGaN/GaN HEMTs by sub-bandgap optical pump. The device is fabricated on 6H-SiC substrate passivated by 120nm SiNx. The barrier and the buffer layer are 25 nm Al0.25Ga0.75N and 2 μm GaN, respectively. During optical pumping, the VDS and VGS applied are 0.5V and 0V to minimize the self-heating effect and the change in drain current is monitored. The wavelength of monochromatic source we used were 671 and 447 nm, with the same power density, 29 mW/mm2, the power density that the number densities of photons for both wavelengths are in the same order (1016 sec-1mm-2). After optical pumping, the device was then stressed at semi-on state (VDS=20V, VGS=-1V) under an elevated temperature of 80 °C until the drain current decreased by 10%.  High electric field during the stress allows electrons to leave the channel and induces traps in the buffer layer, which induces current degradation.  Figure 1 shows the result of optical pumping for the devices before and after the stress. The illumination starts at 10 seconds and lasts for 2 minutes. From Table I we can see that the amount of current increase when the device illuminated by 447 nm is larger than that illuminated by 671 nm, indicating deeper traps being affected due to the photon with higher energy. Larger difference between illuminated current (Ihυ) and dark current (Idark) can be observed after the stress, and we can see that there is 0.21mA and 0.57mA increase in the amount of difference when the device is under the exposure of 671 nm and 447 nm photons, respectively. This suggests that there are more deep defects than the shallow ones created due to stress. Based on the current difference induced by photons, we can learn the number of carrier detrapped, and the estimated value is included in table I.

The work described above is useful for evaluating the type of traps and their approximate population during DC device stress and measurement.  The traps measured by this method of below bandgap optical pumping are found in the entire AlGaN/GaN structure, both surface regions and buffer layer.  It is well know that surface traps lead to a current collapse effect which is detrimental to device performance.  The presences of these surface traps can be determined from gate-lag measurements.   It is our goal to optically enhance the gate-lag technique by incorporating the two into one measurement system.   This will allow for characterization of trap energy, population and location in the HEMT structure.

This work performed at the University of Florida was supported by an AFOSR MURI monitored by James Huang. 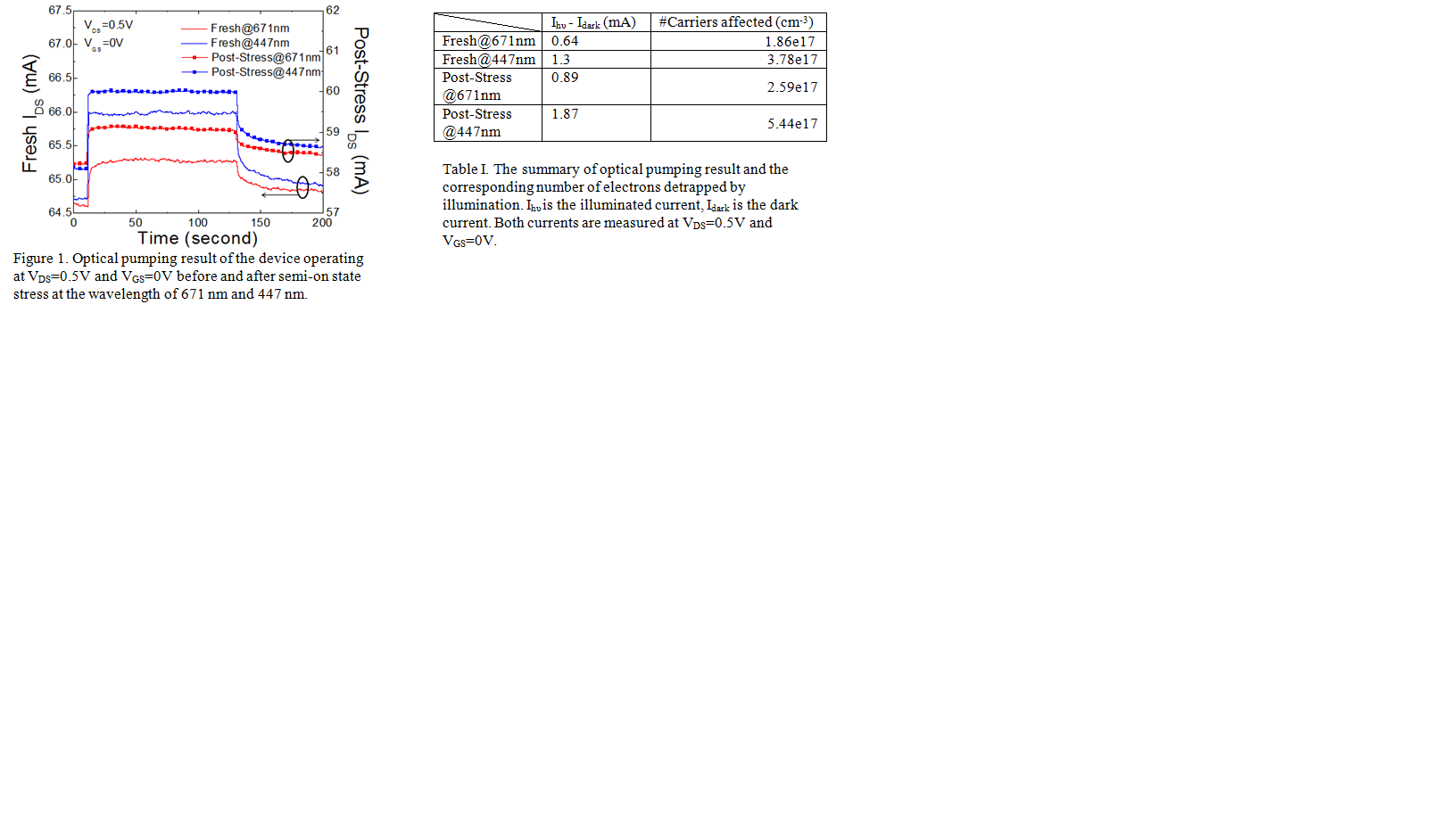