1668
Analysis of the Reduction of 1,2-Dimethyl-5-Nitroimidazole Using Cyclic Voltammetry

Nitroimidazoles are known to be medicinally active against protozoan diseases such as giardiasis that are most common in countries with poor sanitation. Giardiasis is an infection of the small intestine, which leads to such symptoms as dehydration and the body’s inability to absorb adequate nutrients from the intestines. The full mechanistic action of nitroimidazoles is not yet known, but it is known that the compounds are activated by reduction. The goal of this study is to develop a better understanding of the reactivity of reduced nitroimidazoles by studying the electrochemistry of simple nitroimidazoles in the presence of different acids. The acids change the reduction pathway of the compounds. It is believed that the intermediates in the reduction pathway of the compound lead to bacterial cell death. In particular, the compound investigated in this study is 1,2-dimethyl-5-nitroimidazole, which has a very similar structure to the widely used drug metronidazole

1,2-dimethyl-5-nitroimidazole, a commercially made compound commonly used in veterinary medicine, has different substituents than that of metronidazole (Chart 1), but has an identical nitro group. Having a nitro group in common with metronidazole is important, since the reaction pathway proceeds with changes to the nitro group

There are several theories regarding the mechanism by which the nitroimidazoles induce cell death in protozoans. The first theory is that the radical anion causes DNA damage. A second theory is that the further reduced intermediates, either the nitroso (NO) or hydroxylamine (NHOH) compounds, react with thiols in the cell. This reactivity with thiols could cause a decrease in intracellular thiols and disrupt the cellular redox balance. A third theory is that the nitroimidazoles could react with cysteines on proteins, which would lead to the deactivation of proteins.

This study of 1,2-dimethyl-5-nitroimidazole shows that the reduction pathway differs from that of metronidazole, though both are similar in structure except for one substituent. In the CV’s of the 1,2-dimethyl-5-nitroimidazole, there is a major product peak at potential of -0.75 V vs Fc. From previous studies, the nitroso compound has been ruled out as the source of this peak. Other hypotheses that the peak is due to nitrite or hydroxide can be ruled out since additions of nitrite and hydroxide indicate different behavior. Based on these findings, our current hypothesis is that the source of this peak may be the deprotonated hydroxylamine.

Results so far with 1,2-dimethyl-5-nitroimidazole have increased our understanding of the compound’s biological behavior. A greater understanding of this behavior will aid in the development of new types of drugs against parasitic and bacterial diseases. 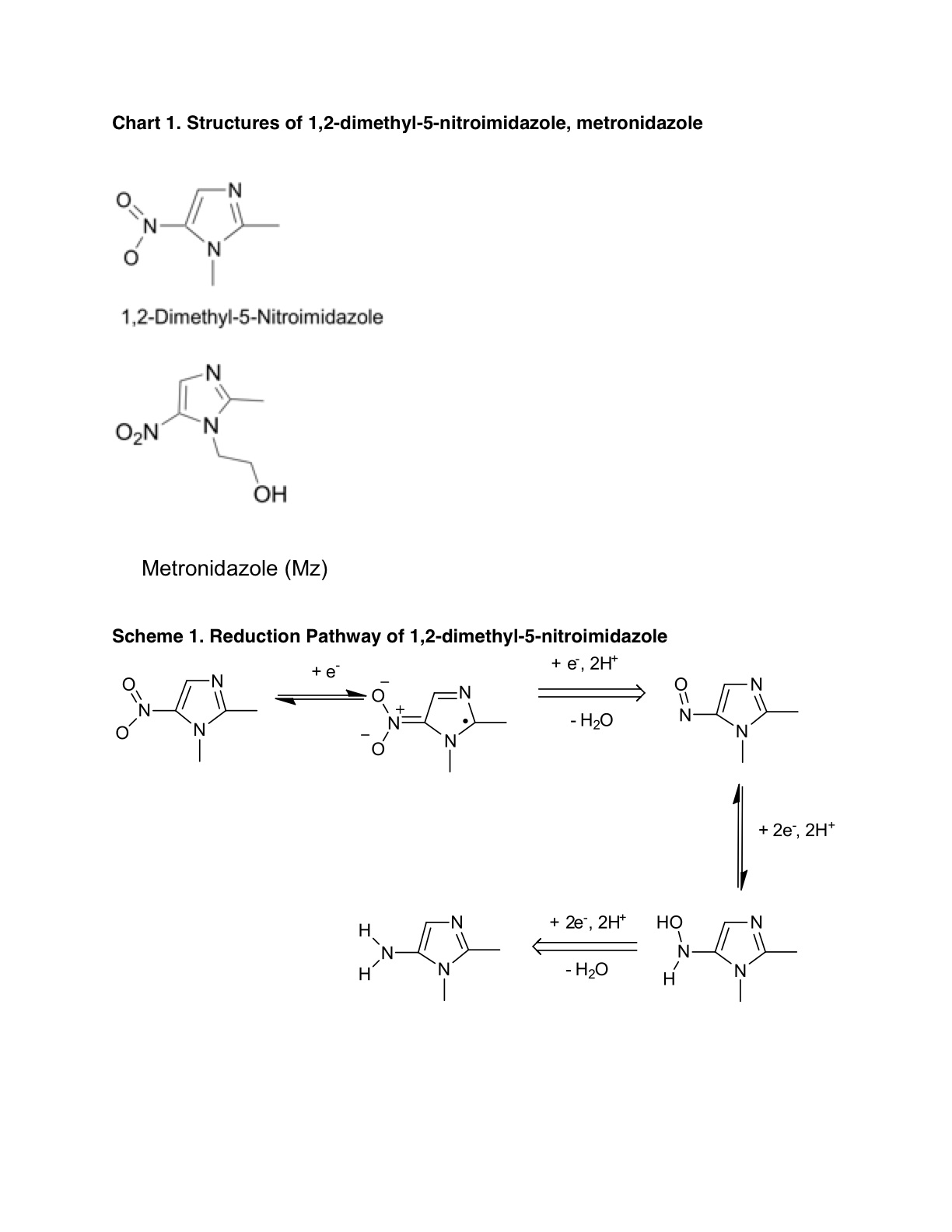