Research in the field of Bioelectrochemical Systems (BES) has focused on utilising compounds in wastewater to bioelectricity either by Microbial Fuel Cells (MFCs) or biosynthesis using Microbial Electrolysis Cells (MECs). The latter requires electrical input, whereas the former generates electricity, with both technologies resulting in valuable product recovery such as hydrogen gas or caustic soda [1,2]. The proton selective membrane properties and its configuration in dual-chamber MFCs, allows the extraction of cations other than protons from the anode to the cathode. The current-dependent transport results in electro-osmotically dragged water molecules reaching the cathode [3]. The current study reports on the production of catholyte on the surface of the cathode electrode, which was achieved as a direct result of electricity generation using MFCs fed with wastewater and employing Pt-free carbon based electrodes.

Twelve MFCs were tested in triplicate groups assembled with 25mL anodes, which were inoculated with activated sludge. The cathode chambers were empty and closed - but not air-tight, and contained electrodes as follows: Carbon cloth with Microporous Layer (MPL), carbon fibre veil (CV), carbon fibre veil with MPL (CV MPL) and activated carbon (AC). All cathodes had a geometric surface area of 10cm2 and were mechanically pressed against the CEM membrane.

All tested MFCs presented herewith showed a catholyte production directly on the surface of the corresponding electrode, with AC being the best (see Fig.1). The data presented in Fig.1 show the correlation between catholyte generation and power production for each MFC. It clearly shows that the more powerful the MFC unit is, the more catholyte it produces. Moreover, the produced catholyte’s pH (12.9-13.3 suggesting caustic content) and conductivity, showed gradual increase with power (data not shown), which suggest that the cationic transport might present a mechanism of water extraction from the anolyte via electro-osmotic drag (under load) and osmotic pressure (under open-circuit). The total charge transfer in the MFC is related to the electro-osmotic drag of water through the membrane [3], whereas osmotic pressure gradient that exists between dissimilar solutions is dominant under open-circuit conditions, where no electron transfer occurs.

Figure 1. Amount of catholyte produced by the MFCs, normalised against open-circuit conditions, during a 7-day operation. 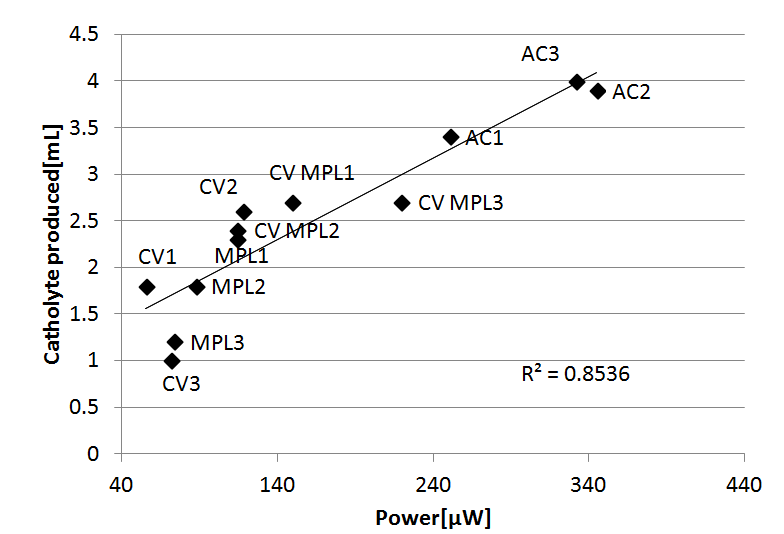