Manatee, Ground Level (Hilton Orlando Bonnet Creek)
F. H. Huang and H. C. Chiu (Chang Gung University)
A tunable low-pass filter (LPF) is developed and fabricated in 0.5 μm GaN-on-Si HEMT process. By using HEMT device to be a switch, the shunt-type switched capacitors can be presented. The performances of switching low/high capacitance ratio and power handling can be also determined with a proper arrangement of capacitors and HEMT device size. The on-chip spiral inductors are used for designing a compact 3-order LC low-pass filter. The 3-dB bandwidth of the filter is ranging from 3 GHz to 7 GHz by varying the gate bias from 0 V to -6 V. The low frequency insertion loss is 0.4 dB. The measured power handling performance is up to 36 dBm at 2 GHz under on-wafer testing.

The schematic of the tunable LPF is shown in Fig. 1 (a). The inductors L1 and L2 are the on-chip spiral inductor. The bandwidth of LPF can be changed by a variable capacitance, Cvar, which is achieved by a switched capacitor as shown in Fig. 1 (b). The transistor M1 here is to be a switch to determine the equivalent capacitance Ceq with involving the capacitors C1~C4. The switching state of M1 is controlled by bias VG through R1. An ON-to-OFF capacitance tuning ratio can be described as

Note that the tuning ratio can be easily determined by arranging the proper capacitances of C1 and C2. In other words, a high Cratio can be therefore obtained if the capacitance ratio C2/C1 is large enough in the switched capacitor. To increase the power handling capability, C2/C1 ratio should be taken into account with Eq. (1). Theoretically, the switched capacitor exist no power handling limitation if it is operated under ON state with a small Rch.

The active and passive components were manufactured by in-house microstrip AlGaN/GaN MMIC process. AlGaN/GaN heterostructure was grown on silicon substrate by MOCVP. The resistivity of the silicon substrate is about 6×103 W•cm. The AlGaN/GaN epi structure is based on a 1.8 μm undoped GaN buffer layer on which a 18 nm Al0.27Ga0.73N layer is grown resulting in a typical sheet carrier density of 1013 cm-2 and a mobility of 1530 cm2/V-s according to Hall measurements. For source and drain electrodes, Ti/Al/Ni/Au (3000 Å) based ohmic contacts were formed by e-gun evaporation then subsequently annealed at 870°C for 30 sec under nitrogen ambient. The HEMT (gate width of 200 mm, gate length of 0.5 mm) has a threshold voltage of -3 V, a cut-off frequency (fT) of 12 GHz, and a maximum oscillation frequency (fmax) of 20 GHz. The transistor also performs the characteristics of a maximum current density of 430 mA/mm and a drain breakdown voltage near 30 V. In order to achieve MMIC fabrication, the passive components such as spiral inductor, MIM capacitor, and microstrip line can be implemented by 3-metal layer and backside via processes, where the thickness of silicon substrate is thinned to 100 μm. Fig. 2 (a) and Fig. 2 (b) present the small-signal insertion and return losses. The simulated and measured 3-dB bandwidths of LPF both are close to 7 GHz when the HEMT device is under OFF state. By increasing the VGbias to be 0 V, the bandwidth will be decreased due to an increasing capacitance. The bandwidths are changed to 3.5 GHz and 3 GHz for simulation and measurement under ON state. The measured low frequency insertion losses are less than 0.4 dB for both states at 100 MHz.

To obtain a high power RF signal for power handling measurement, a commercial high output power amplifier was used for on-wafer testing. The input power can be monitored with using a broadband directional coupler to the measurement system. Due to the output power limitation of power amplifier, the maximum input power is only 36 dBm with calculating the cable loss. Fig. 3 presented the measured power performance of the tunable LPF. The measured power handling capability under OFF state exhibits a 0.5-dB gain compression at an input power of 36 dBm at 2 GHz.

In summary, a high-power tunable LPF has been designed and implemented using GaN-on-Si HEMT process with a compact chip size. Based on the characteristic analysis for the proposed switched capacitor circuit, a high capacitance tuning ratio can be achieved when it is operated under continually tuning or switching operation. The performances of wide tuning bandwidth, large power handling, and high linearity are also presented in the tunable LPF circuit. 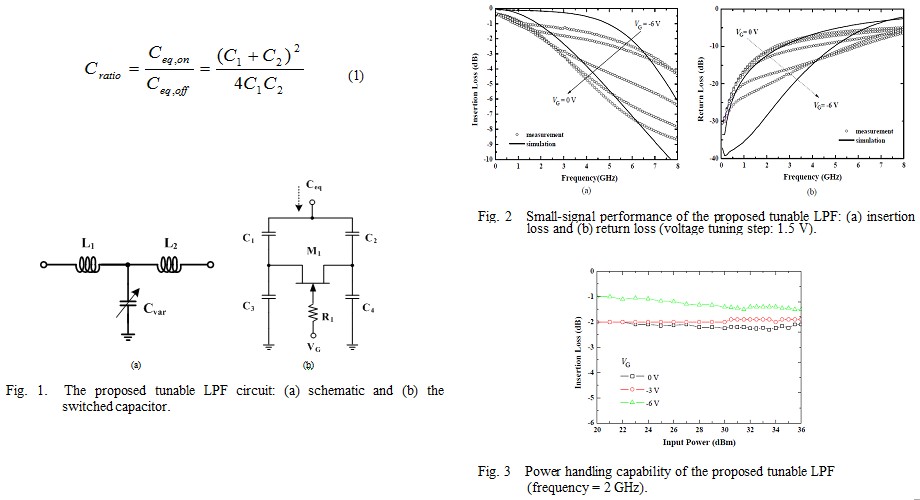