In this paper we explore two approaches for increasing the DUV photoresponse of 4H-SiC photodiodes by increasing the collection of DUV- generated carriers near the surface through drift within the high E-field region. As a result, the photo-generated carriers are more efficiently collected and the impact of surface state recombination is reduced. These approaches include replacing the illuminated top doped SiC layer of the diode with (1) a transparent metal contact or (2) a doped wider band gap III-Nitride semiconductor structure that is transparent in the spectral range of interest.

Figure 1 shows the measured unity gain spectral response of a p-n--metal 4H-SiC diode reverse biased at 30V and consisting of a 2 µm-thick p+-SiC layer doped 2x1018 cm-3, a 350 nm-thick n--SiC layer lightly doped 5x1015 cm-3, and employing a thin 5 nm transparent Ni metal top contact (broken red line). The response for a typical p-n--n+-SiC diode consisting of a 2 µm thick p+-SiC layer doped 2x1018 cm-3, a 480 nm thick n--SiC layer lightly doped 5x1015 cm-3, and a 100 nm thick n+-SiC layer doped 4.5x1018 cm-3 is provided for comparison (solid-black line). A nearly flat QE between 40-45% is observed for the p-n--metal detector between 200- 270 nm that exceeds the performance of the conventional p-n--n+ diode for wavelengths shorter than 235 nm despite absorption losses within the metal contact across the spectral range of ~40-50%. This enhancement is attributed to improved collection of photogenerated carriers through drift within the high E-field region despite the presence of surface states.  This conclusion is supported by modeling the expected photocurrent in the p-n- -metal (red open circles) and conventional p-n--n+ (black open squares) diodes.

An alternative approach that can reduce absorption losses in the spectral range of interest is to employ a transparent III-Nitride semiconductor n-type doped layer. Figure 2 shows the measured spectral response of a photodiode having a 2 µm-thick p+-SiC layer doped 2x1018 cm-3, a 350 nm-thick n--SiC layer lightly doped 5x1015 cm-3, a 10 nm-thick AlN layer, and a 100 nm-thick Al0.85Ga0.15N layer. The devices exhibit a peak unity gain QE of 55-58% between 265-250 nm that diminishes at shorter wavelength due to absorption in the top AlGaN layer. Increasing reverse bias above 40V results in an increase in response peaking around ~ 250 nm that is associated with inhomogeneous gain at wavelengths shorter than 255 nm (Figure 2- top).  This is attributed to increased absorption associated with valence to higher conduction band transitions in SiC that ensures that these photons are absorbed near the interface between SiC and AlN, where photo-generated holes will have maximum transit distance through the depletion region as well as the larger impact ionization rate for holes over electrons for SiC.  Calculations of the expected gain vs. wavelength within a p-i-n SiC diode illuminated from the n- region for varying magnitudes of E-field in the depletion region show similar trends consistent with this interpretation (Figure 2 inset). 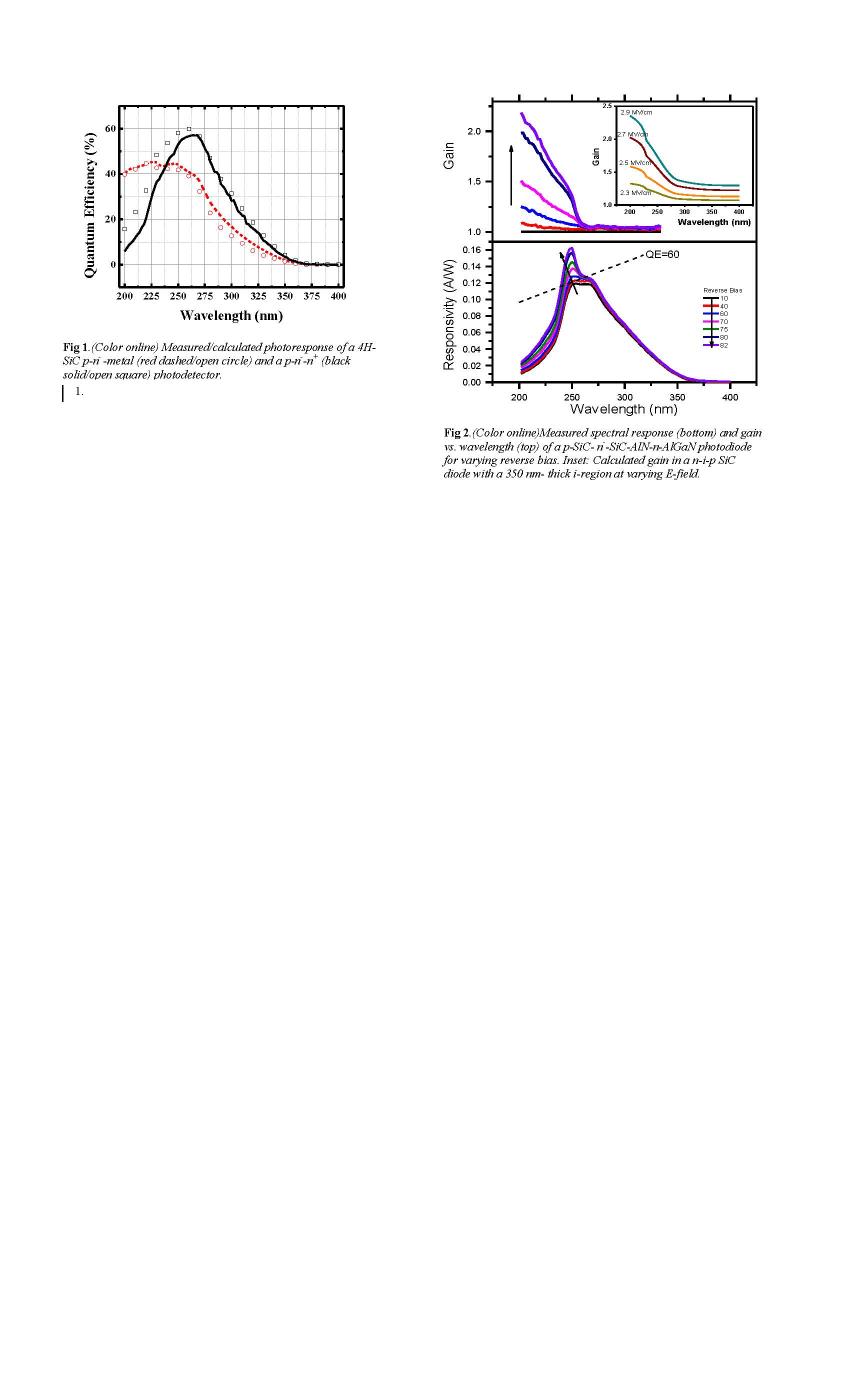