Expo Center, 1st Floor, Universal 17 (Moon Palace Resort)
A. Sakai (Osaka University)
X-ray diffraction (XRD) has been recognized as a well-established method by which lattice structures of crystalline materials can be clarified precisely. High penetrating power of X-ray allows us to reveal inner structures and buried interfaces usually implemented in materials and devices. Conventional XRD with a typical probe size of over 100 μm clarifies only averaged structures having good statistics without any untypical ones, known as ensemble average[1]. However, in general, the property and the performance of materials and devices become governed by the localized specific structures when miniaturized to a nanometer scale. In such a case, an X-ray beam with a probe size much smaller than the conventional one is truly required.

X-ray microdiffraction (XRMD) is one of the most effective methods to establish both the advantages of XRD analysis and high special resolution to exceed the ensemble average analysis. The state-of-the-art XRMD system at the beam line of the synchrotron radiation facility, Super Photon ring 8 GeV (SPring-8), in Japan, realizes an X-ray probe with a size of a few hundred nanometer [2]. Thus XRMD gives us precise and rich information especially on the crystalline texture and the local strain distribution on a submicron scale.

Line-shaped Ge films with nanometer-sized widths on Si substrates are promising for applying to next generation three dimensional high-mobility channels in metal-oxide-semiconductor field effect transistors. One of the concerns is the introduction of threading dislocations in the Ge films; 60° dislocations critically alter the crystallinity of Ge films. Aspect ratio trapping with the use of selective epitaxy of Ge on SiO2-patterned Si substrates is one of effective ways to reduce threading dislocations in Ge thin line channels [3]. However, there is insufficient understanding of strain relaxation and local structures in the Ge thin lines with such anisotropic geometry.

XRMD has been employed to investigate the crystallinity of the line-shaped Ge films with line widths of 100-1000 nm [4]. It has been revealed that crystal domains with a size of about 100 nm in the Ge thin lines were tilted at different angles within the range of 0.6 degree. The tilt angle range was larger in thinner Ge lines after the growth and reduced by annealing for all line widths. The domaining was found to be mostly caused by the introduced 60° dislocations. The formation of a single large domain with a specific tilt angle was also achieved near the surfaces of Ge thin lines with widths of 100 and 200 nm, which was attributed to the suppression of threading dislocation formation by the SiO2side walls.

AlN with a 6.2-eV-wide bandgap is potentially prospective as a substrate material for deep ultraviolet optoelectronics devices. Due to the lack of bulk AlN crystals, thick film growth with hydride vapor phase epitaxy is known to be promising for the production of large scale AlN wafers. Crystalline quality of AlN films directly grown on α-Al2O3substrates is poor with high dislocation density and residual strain due to lattice and thermal mismatches. In contrast, epitaxial lateral overgrowth using trench-patterned templates was proven to be effective in obtaining high-quality ﬁlms [5].

Local strain distribution in thick AlN films grown on a periodic trench-patterned AlN/α-Al2O3template (see Fig. 1(a)) has been investigated by XRMD [2]. Figure 1(a) reveals nanometer-scale voids that form tunnels in the AlN film and are periodically arranged at 6-µm-intervals corresponding to the periodicity of trench pattern. XRMD experiment with the X-ray incidence into the cross-sectional plane of sample (see Fig. 1(b)) was conducted for taking reciprocal space maps (RSMs) from the two-dimensional (2D) scan area at 1- and 2-μm intervals in the X and Z axes, respectively. 2D distribution maps of strains along the Z and X directions obtained from the RSMs are shown in Figs. 2(a) and 2(b), respectively. It should be noticed that both strains are considerably relaxed around the void region, as illustrated in Fig. 2(c). This result demonstrates that XRMD clearly discloses the local strain distribution in the thick AlN film and the voids are effective in relaxing the strain induced during the growth process. 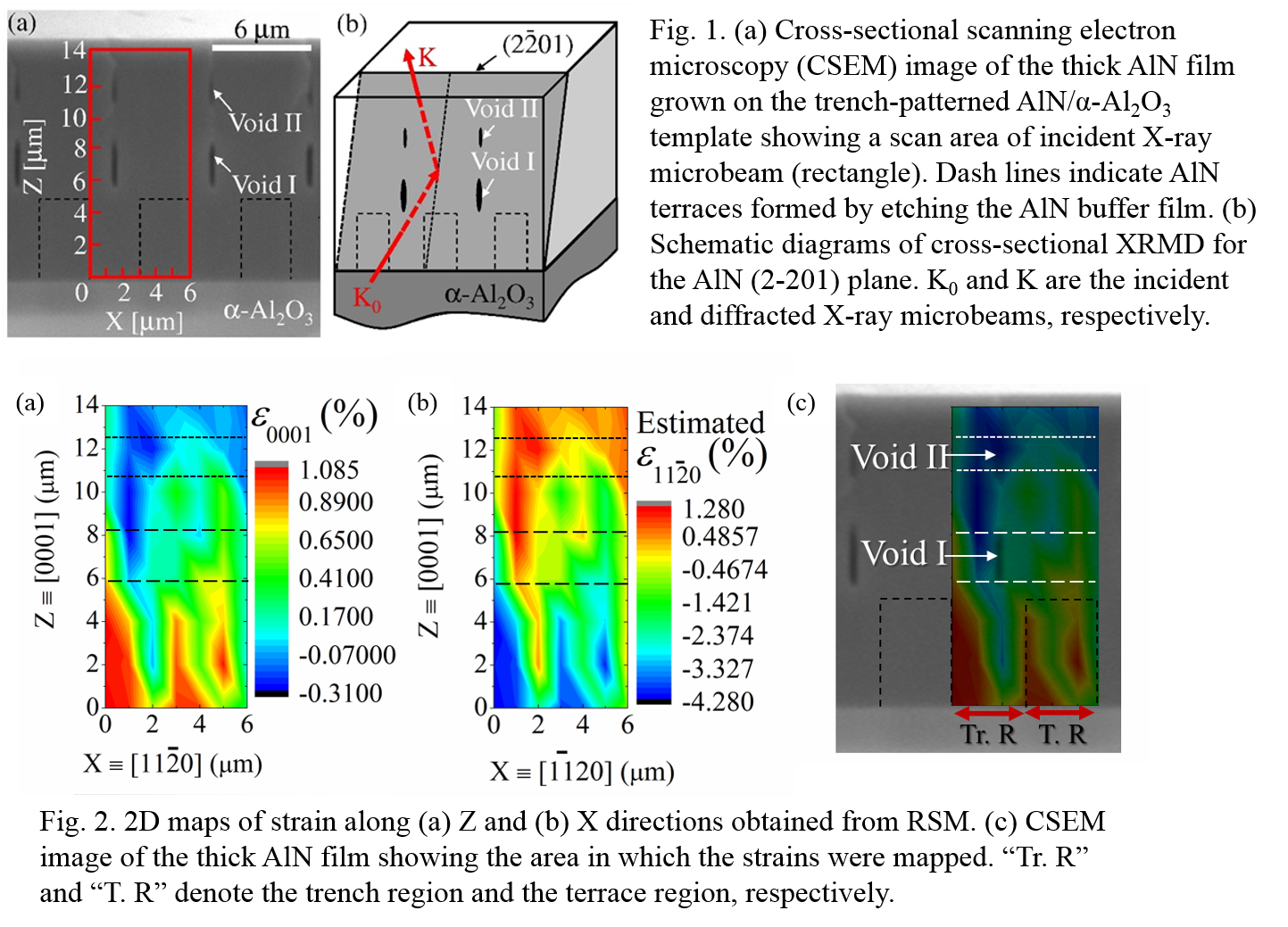