Expo Center, 1st Floor, Universal 4 (Moon Palace Resort)
D. Kim, S. Yoon, and M. Hong (Korea University)
Amorphous InGaZnO (α-IGZO) thin-film transistors (TFTs) are very promising due to their potential use in thin film electronics and display drivers. However, the stability of AOS-TFTs under the various stresses has been issued for the practical AOSs applications. Up to now, many researchers have studied to understand the sub-gap density of states (DOS) as the root cause of instability. Nomura et al. reported that these deep defects are located in the surface layer of the α-IGZO channel. Also, Kim et al. reported that the interfacial traps can be affected by different RF-power during RF magnetron sputtering process. It is well known that these defect states can influence on the performances and stabilities of α-IGZO TFTs. Nevertheless, it has not been reported how these defects are created during conventional RF magnetron sputtering. In general, during conventional RF magnetron sputtering process, negative oxygen ions (NOI) can be generated by electron attachment in oxygen atom near target surface and accelerated up to few hundreds eV by a self-bias of RF magnetron sputter; the high energy bombardment of NOIs generates bulk defects in oxide thin films and can create the defects of α-IGZO thin films. The a-IGZO TFTs have been fabricated with different dc biases (200 V, 300V, and 400V). Figure 1 shows that the transfer characteristics of the a-IGZO TFTs with a positive bias stress (PBS in (a)), a negative bias stress (NBS in (b)), and a negative bias illumination stress (NBIS in (c)). It is observed that the changes of the transfer characteristics with PBS, and NBS are not depended on different dc biases. However, a huge shift of a threshold voltage on a-IGZO TFTs is observed under NIBS condition.

In this study, we have investigated that the NOIs accelerated by dc self-bias were one of the dominant causes of instability in α-IGZO TFTs when the channel layer was deposited by conventional RF magnetron sputtering system. Finally, we will introduce our novel technology named as Magnetic Field Shielded Sputtering (MFSS) process to prevent the NOIs bombardment effects and present how much to be improved the instability of α-IGZO TFTs by this new deposition method. 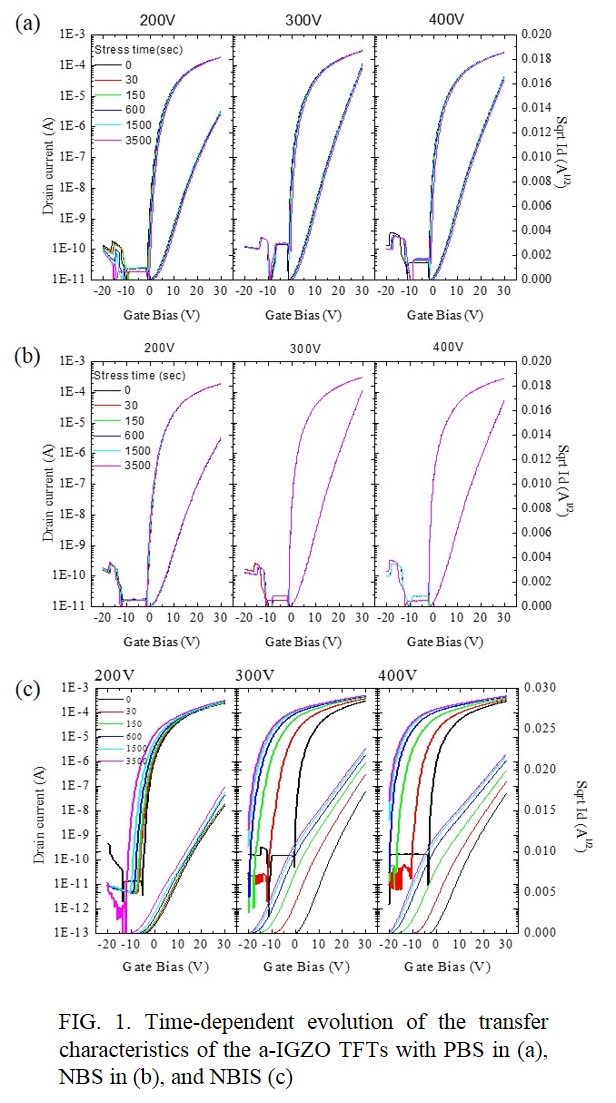