Sunrise, 2nd Floor, Galactic Ballroom 2 (Moon Palace Resort)
T. Sasaki, C. Okuda, T. Nonaka, Y. F. Nishimura, Y. Makimura, Y. Kondo, T. Kobayashi, and Y. Takeuchi (Toyota Central R&D Labs., Inc.)
The structural and chemical change of positive and negative electrodes during overcharge of Li-ion batteries is a primary concern of battery developers and users, because the overcharge will lead to thermal runaway in the worst case. Over the past decades, a considerable number of studies have been conducted on this issue by thermometric and/or gasometric analyses[1]. However, the reactions between active materials and electrolytes during overcharge are extremely complicated, therefore this issue is still in the heat of the argument. To explore the behaviour under such abusive conditions, analyses “after” overcharge would be not enough, analyses “during” overcharge should be necessary because the active materials are obviously unstable and in a non-equilibrium state at the high potential. From these viewpoints, in situX-ray diffraction (XRD) and X-ray absorption fine structure (XAFS) are perfectly suited methods to investigate the overcharge behaviour of positive and negative electrode materials.

LiNiO2-based positive electrodes were prepared by coating a dispersion composed of LiNi0.75Co0.15Al0.05Mg0.05O2[2], carbon black (as a conducting agent), and polyvinylidene fluoride (PVDF) (as a binder, Kureha Corp. Japan) (85:10:5 weight ratio) in N-methyl-2-pyrrolidone (NMP) on aluminium foil. Graphite-based negative electrodes were prepared using the same procedure as for the positive electrodes. The mixture of graphite and PVDF (90:10 weight ratio) was coated on a copper foil. Both electrodes were dried at 120 ºC under vacuum for at least 10 h before construction of the electrochemical cell. The electrolyte used in the experiments was 1.0 M LiPF6 dissolved in a solution of ethylene carbonate (EC), dimethyl carbonate (DMC), and ethyl methyl carbonate (EMC) (30/40/30 volume ratio, respectively). Laminate-type pouch cells were used for the in situ XAFS and XRD measurements. The cells were charged under constant voltage to 4.1 V and discharged at 0.2 C rate to 3.0 V before in situ experiments. The electrochemical overcharge operation was carried out galvanostatically up to 10 V at 2 C or 10 C on BL33XU beamline (Toyota beamline) at SPring-8[3].

Figure 1 shows the charge and overcharge voltage curves at 2C during in situ measurements at 25 ºC and the corresponding Ni-K absorption edge energy. The energy at half-step height (where normalized absorbance = 0.5) was used as an index of Ni valence. The horizontal axis at 30 min is corresponding to SOC 100%. Only Ni was oxidized with the increase of SOC until 100% (until 30 min). On the other hand, only Co was oxidized above SOC 120%. Both of Ni and Co valence was not changed above 5.5 V, therefore in this region, every charge current was consumed by side reaction on positive and negative electrodes. At elevated temperature, 50 ºC and 80 ºC, the side reaction was accelerated, especially on the negative electrode side. The relationship between charge reactions, side reactions and degradation effects on positive and negative electrodes will be discussed with temperature dependency.

Figure 1.  Charge and overcharge voltage curve of the laminate-type pouch cell at 2C during in situ measurements and the corresponding Ni-K absorption edge energy. 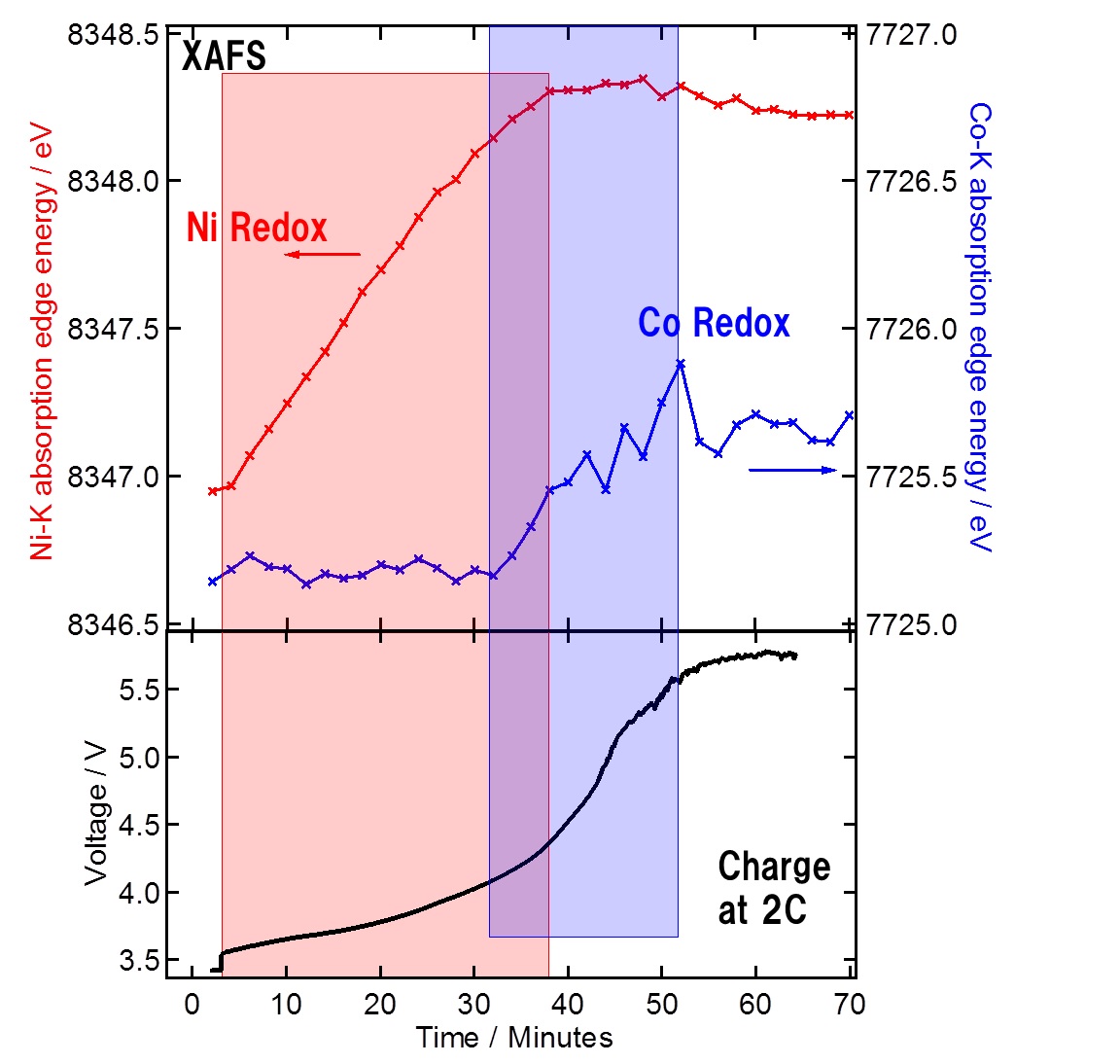