Electrode/electrolyte interfaces have a great influence on performance of lithium-ion batteries, e.g., rate capability and cycle durability. However, structures of the electrode surfaces are not yet clear on the atomic scale. Recently, we have found using a surface sensitive XAS technique and thin-film model electrodes that Co ions at the surface of LiCoO2are reduced just by immersion into organic electrolyte [1]. This suggests that the electrode surfaces are likely to be modified in the real batteries by chemical reactions with organic electrolyte components. Therefore, it is necessary to consider stability of the surface structures including changes in compositions and arrangements under the environment in the real batteries.

The surface models used in this study are slabs consisting of 15–19 layers of the (104) planes with sufficiently thick vacuum regions. Inversion symmetry is assumed to avoid artificial dipole effects. The plane-wave basis PAW method is used for the first-principles calculations with the GGA+U exchange correlation functional.

Surface energy is estimated as a function of the environment, i.e., chemical potentials, μi, as

where E(slab) is the energy of the slab model, Ni is the number of atoms of species i in the slab model, and Sis the surface area, respectively. The chemical potentials have a constraint of

where E(LiCoO2) is the energy of LiCoO2 bulk. Assuming that LiCoO2 coexists with Li2O, i.e., 2 μLi + μO = E(Li2O), the surface energy is estimated as a function of μO.

Here, we show one of the nonstoichiometric surface models, in which Co ions are substituted for the topmost Li sites. The oxidation state of the topmost Co ions is +2 with the high spin configuration (dup5, ddown2), whereas the oxidation state of the other Co ions is +3 with the low spin configuration. Thus, this Co substitution surface model has a similar structure to rocksalt CoO.

The suggested Co reduction at the surface is consistent with the experimental observation by the surface sensitive XAS measurements [1].

This work was supported by RISING battery project from NEDO, Japan. 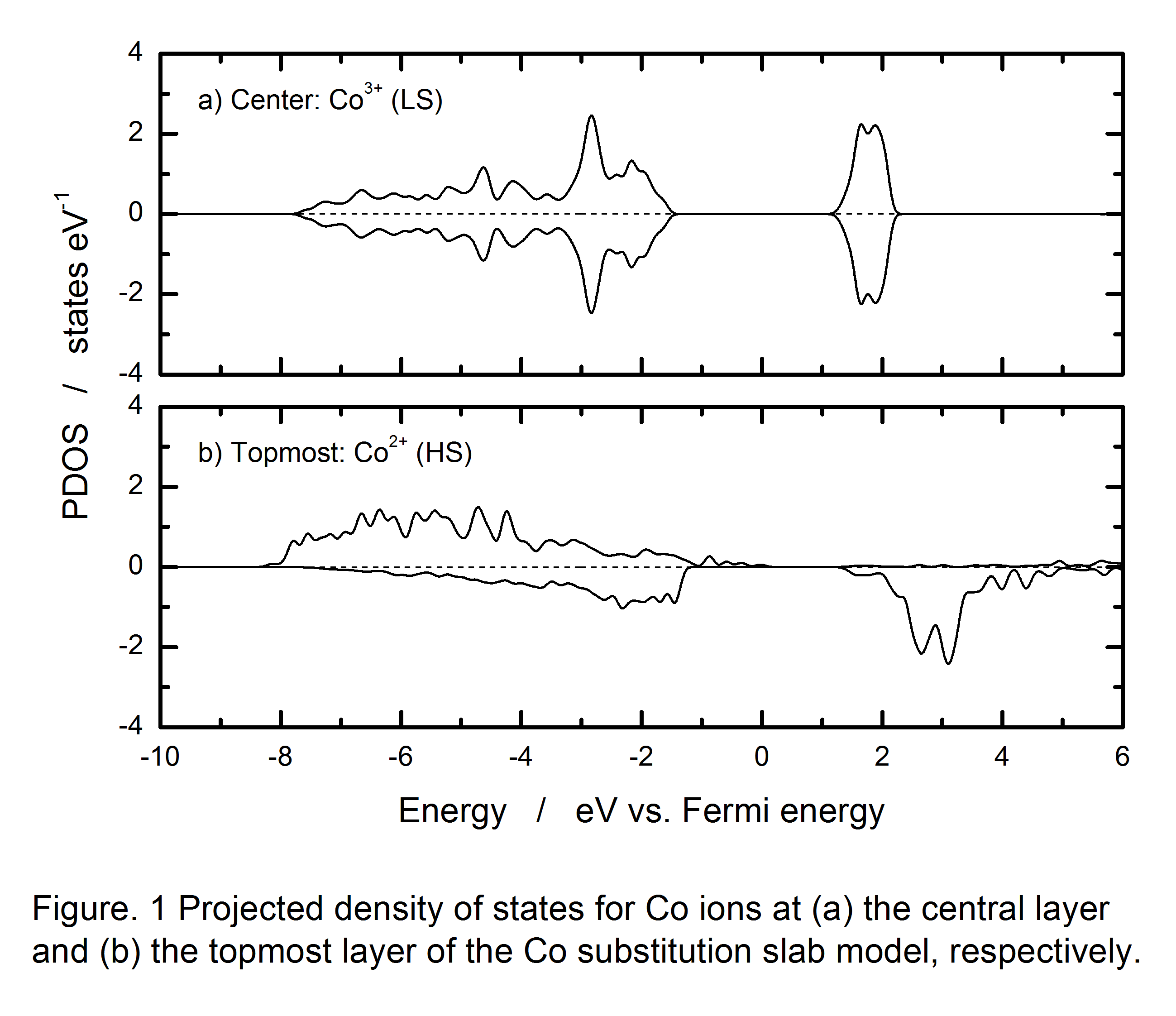