Atmospheric corrosion proceeds under an extremely thin solution film. In actual environment, the thickness or concentration of thin solution film increases and decreases continuously with the change in temperature and humidity. These changes act as a very important role in the atmospheric corrosion process. However, it is quite difficult to monitor corrosion rate of metals under a thin solution film with conventional electrochemical methods which are suitable for studying corrosion behavior in bulk solution. The largest problem is an uneven current distribution over working electrode which leads to serious errors in the measurements of the corrosion rate because an extremely high solution resistance. By using Electrochemical Impedance Spectroscopy (EIS), current distribution over electrode surface can be evaluated from frequency dependency of the phase shift1. The current distribution becomes uneven if the phase shift goes no further than -45° on Bode plot when constant phase element α=1. In such a condition, a correct charge transfer resistance Rct cannot be obtained. In the present study, some approaches were proposed to measure the Rct under a thin solution film with uneven current distribution.

A two-electrode cell composed of a pair of identical carbon steel plates (1 cm × 1 cm) in parallel with a gap of 0.2 mm was used. NaCl or NaNO3 solution film with different thickness was covered over cell surface. The thickness of thin film was controlled using a micropipette to render a pre-determined volume, which was assumed to spread over cell surface uniformly. When thickness was smaller than 25 μm, ethanol was mixed into initial solution to guarantee a uniform spread of thin film. The EIS measurements were performed at OCP with a 10 mV amplitude. The frequency range was from 10 kHz to 10 mHz, with 5 points per decade.

With EIS measurement, the metal-thin film interface can be presented by a one-dimensionally distributed constant equivalent circuit, i.e. Transmission line (TML) circuit, as shown in Fig. 1. The total impedance Ztotal of single electrode is given by

where Xw and L are width and length of electrode respectively, Rs* and Z* are a solution resistance over electrode and a metal-thin electrolyte interfacial impedance per unit length, respectively, and Rsg is a solution resistance over gap between two electrodes. When the value of (γ Xw) is very large, which means current distribution tends to be uneven, Eq. (1) can be converted to

by eliminating the term of coth γXw.

Current distribution over working electrode tends to be uneven when thickness or concentration of electrolyte film decreases. Fig. 2 shows the EIS data of carbon steel covered with a 500μm NaCl solution film with concentration from 0.002M to 2M. Current distribution was evaluated from frequency dependency of phase shift. Uneven current distribution established over electrode surface in whole frequency range when concentration is smaller than 0.02M. Hence, TML model was applied to determine the accurate corrosion rate. The fitting results show quite good consistency with the original data. In the present study, the TML model was applied to eliminate the effect of uneven current distribution during monitoring of atmospheric corrosion rate. Furthermore, the rate-determining step of a metal covered with an extremely thin solution film is discussed. 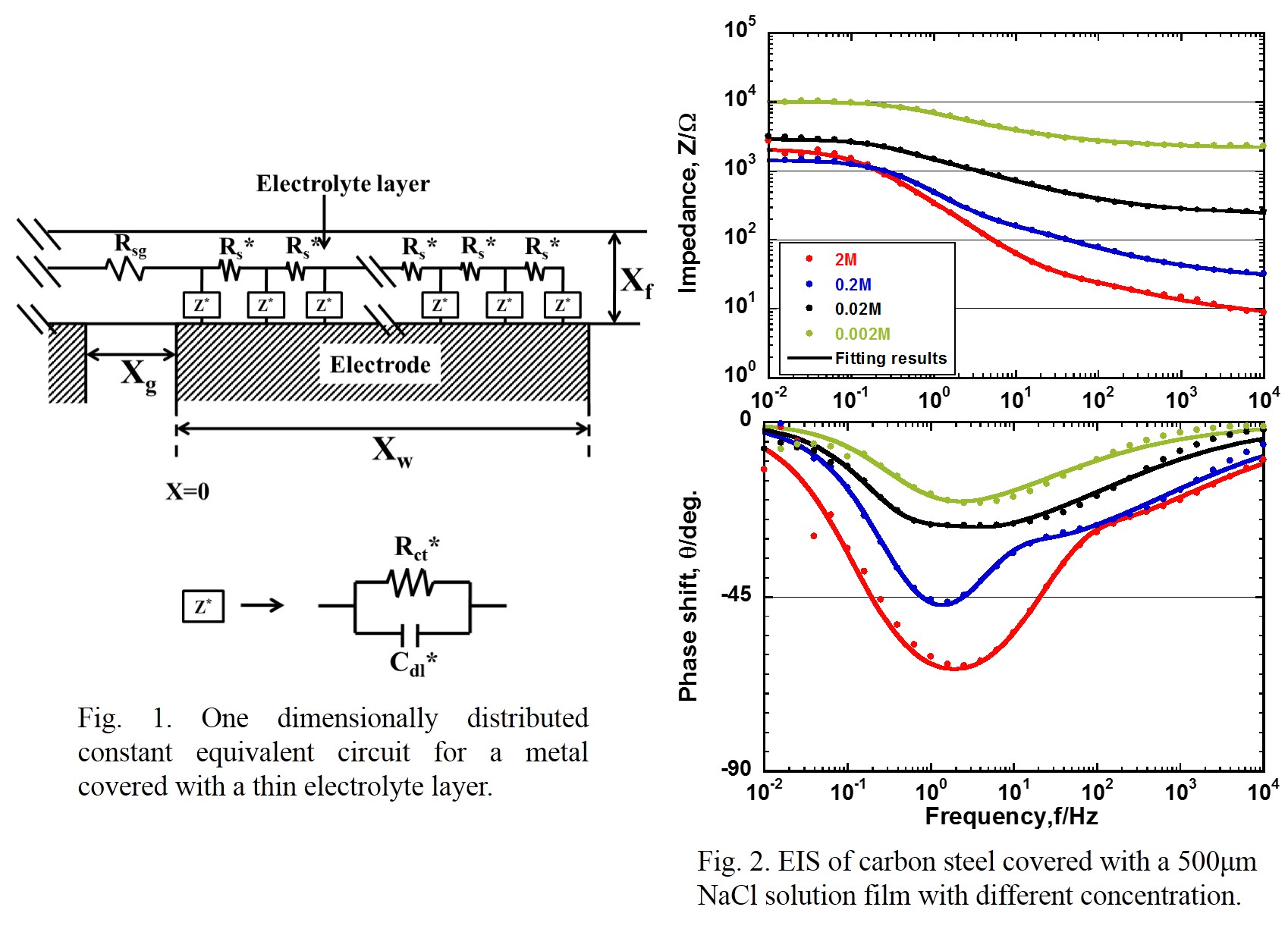