Expo Center, 1st Floor, Universal 6 (Moon Palace Resort)
M. Z. M. Khan, T. K. Ng, and B. S. Ooi (King Abdullah University of Science & Technology)
Optical fiber technology has already been established in the long-distance communications and now intervening the short-reach communications since the intra-rack  and inter/intra-chip interconnects are struggling to satisfy the requirements of the exponentially growing internet and mobile connectivity market in terms of bandwidth, density, cost, and power consumption in particular [1,2]. However, to be competitive enough with the existing electrical interconnects, it is expected that the optical interconnects must offer system energy per bit ~100fJ/bit and eventually ~50fJ/bit in near future [1]. In this regard, the main focus for meeting the energy requirements is on lasers and modulators which converts the electrical signal to the optical one and forms a vital block of an optical interconnect. Both edge-emitting (EEL) and vertical-cavity-surface-emitting-lasers (VCSEL) have found profound interest with recent potential demonstrations. Mode-locking with short-pulses and frequency-comb generation from EEL could potentially be used as optical power supplies in wavelength-division-multiplexed-system (WDM). An energy per bit of 286fJ/bit from VCSEL at 35Gb/s has recently been reported [1].

To achieve these system energy requirements, quantum-confined-active-regions in the form of quantum-dots (Qdot) plays an important role, and  ~1.3µm Qdot lasers are less power hungry compared to quantum-wells (Qwells) with already shown tremendous performance improvement. Recently, much attention has been directed to achieve the Qdots at long-wavelengths on InP material platform. Instead, a new class of self-assembled grown quantum-dash (Qdash) nano-structures were reported. These are elongated Qdots grown as a result of small lattice-mismatch between InAs and InP materials and the resulting complex strain distribution. These elongated nano-structures, emitting in ~1.5-2.0µm are found to have interesting mixed type character, between Qwell and Qdot. Utilizing the highly inhomogeneous nature of Qdashes, ultra-broad gain-bandwidth of >300nm has been demonstrated for potential realization of semiconductor-optical-amplifiers, modulators, detectors, and emitters.

In this talk, we will give a overview of  Qdash based broadband light emitters. Through pre-growth (chirped active region design), and post-growth (intermixing) we achieved  ultra-broad lasing -3dB bandwidth of >50nm from the chirped laser device and ~21(~41)nm from the as-grown (intermixed) non-chirped Qdash laser, with superior characteristics [3]. Fig.1(a) illustrates the lasing spectra of our chirped Qdash ridge-waveguide lasers at different cavity lengths and at high current injection. A broad lasing bandwidth ranging from ~20nm to ~50nm is obtained. To show the viability of this new class of lasers as a single multi-wavelength source in WDM system, the broadband lasing spectrum is coupled into an array waveguide (AWG) with 40 channels and the lasing emission from each  channel is measured and plotted in Fig.1(b). A channel spacing of 100GHz is obtained which is AWG dependent rather than the broadband laser, and each channel -3dB bandwidth of ~0.4nm. This single device solution for the WDM system will significantly reduce the power consumption requirement of the optical interconnects, in addition to be cost-effective and simple, when compared to the current state-of-the-art large number of laser array requirement. In addition, by varying the AWG temperature, a red-shift in the optical emission from a single AWG channel at ~11 A°/°C is observed (Fig.1(c)) thus showing the nearly ideal analogous wavelength tuning using a single broadband laser and AWG. On the other hand, the discrete longitudinal modes of a Fabry-Perot cavity of the Qdash EEL wherein the mode spacing is a function of cavity length (Fig. 1(a)) could be a potential multi-wavelength source or comb laser. In fact, Qdot/Qdash based multi-wavelength lasers has been demonstrated with a 62dB signal-to-noise ratio, 24 channels with 0.8-nm channel spacing and 8.0dB maximum channel intensity non-uniformity over a wavelength range from 1612 to 1632nm [4]. The self-pulsating nature of InAs/InP Qdash/Qdot based lasers due partly to highly inhomogeneous nature of the active region and various non linear phenomenon, made possible the realization of ultra-short pulses in femto-second range which is highly interesting as an optical power supply for the optical interconnects. Both, single section and two-section mode locked lasers has been reported with a pulse width of 560fs with duration 346GHz  has recently been reported at a drive current of ~220mA from a 120µm long single section Qdash laser [5]. 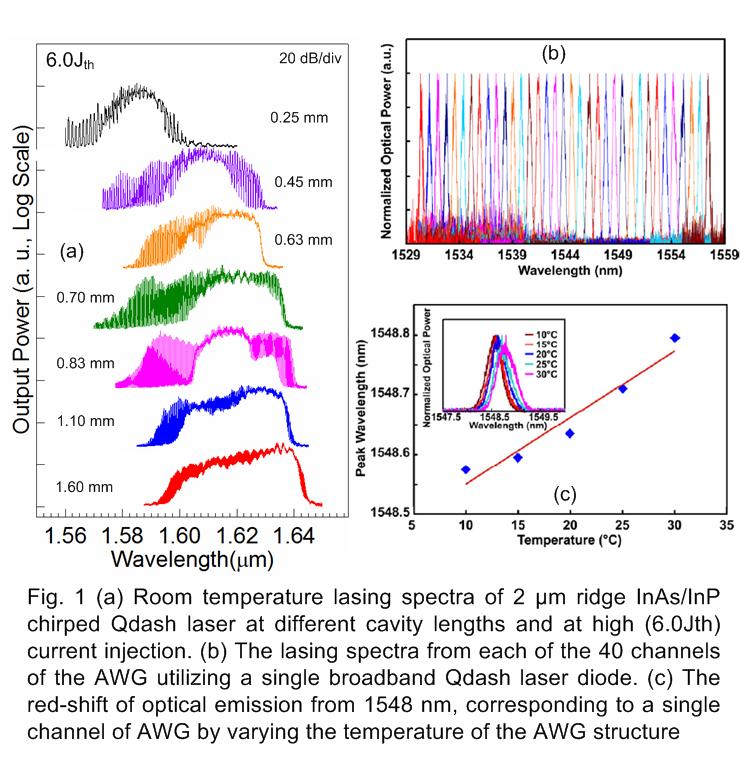