2050
(Invited) Development, Characterization, and Modeling of a TaOx ReRAM for a Neuromorphic Accelerator

There is particular interest in the nonvolatile, analog behavior of ReRAM devices for use in neuromorphic computing applications. Numerous implementations of brain-inspired systems have been suggested, typically utilizing the ReRAM as a synapse-like element in a classical perceptron network (4), (5). A particularly efficient method of utilizing analog memristor behavior employs a ReRAM crossbar matrix based “neuromorphic accelerator,” which trains and executes a multilayer back-propagation algorithm and provides significant improvement in energy per operation and enhanced throughput over traditional hardware (6). This accelerator makes use of the resistive switching cell as a finely tunable nonvolatile analog resistor. Although it is often thought that variability and noise do not significantly affect a neuromorphic system, the simulated accuracy of our algorithm is reduced 8-30% when realistic variability is introduced in the device model.

Hence, we have undertaken an effort to characterize and model the analog behavior and fundamental origins of variability in ReRAM devices. CMOS compatible TiN/TaOx/Ta/TiN ReRAM cells have been developed as described in (7). Analog behavior of the ReRAM devices has been comprehensively characterized both using the typical I-V hysteresis loops, as well as a comprehensive characterization of response to pulses of different length and voltages; an example of this is given in Fig. 1. Significant variability is present in these measurements, which is consistent with other bipolar metal oxide ReRAM results presented in the literature (8).

Both phenomenological and ab initio modeling efforts are being employed to provide a further understanding of the fundamental sources of noise and variation. An analytical model was developed, based on joule heating, which shows that TaOx ReRAM has two state variables: the conductivity and radius of the filament (9). Hence, each resistance state has a number of different configurations which rely on this internal state of the device. The amount of time at a given pulse voltage for a given resistance state to transition to another state is not set for a particular resistance, but also depends on the internal state of the device.

Density functional theory (DFT) calculations were used to further understand the microscopic origin of switching in TaOx (10). A significant observation from this work is that the oxidation state of the oxygen vacancy (VO) is a key determining factor of the conductivity in these films. In particular the VO0 state behaves similar to an ionized donor in a semiconductor.

Results of our modeling efforts are being utilized both to create a circuit level model for the simulation of the neuromorphic accelerator, as well as to reduce the variability of TaOx ReRAM devices. This presentation will further discuss the results of these modeling efforts, comparison of theory to experiment, and application to our neuromorphic computing system. 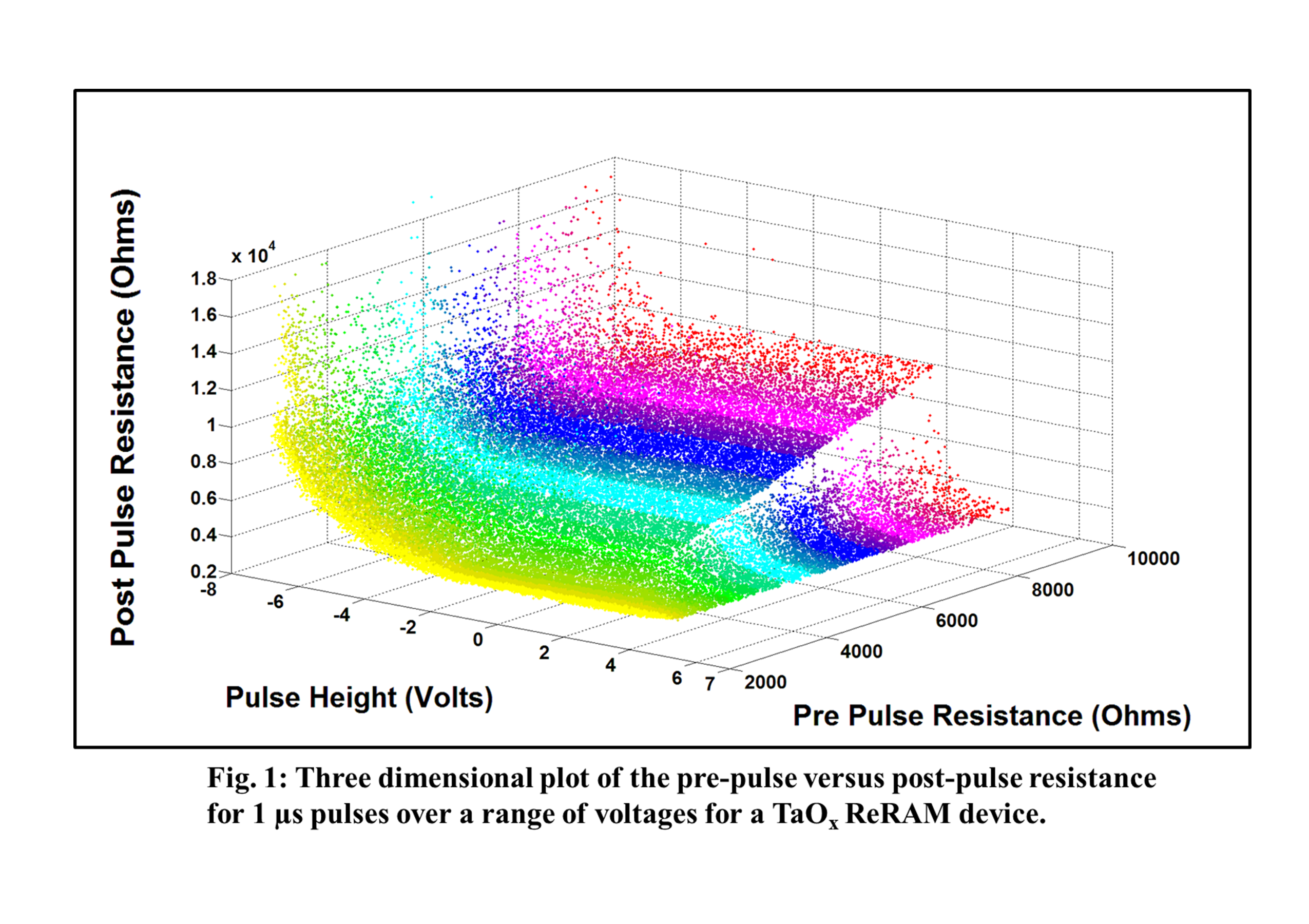