We use a simulation model, which explicitly considers HfOx-specific nature of RRAM characteristics to understand at microscopic level the RRAM device operations [1-3]. This model is based on the description of the physical processes leading to the formation of the conductive filament and the subsequent resistive switching. The impact of the material properties are included at different levels (i.e. charge transport, ion diffusion, atomic bond breakage) by adopting a multi-scale approach. A full 3D description combined with a Monte-Carlo method is considered to account for the stochastic nature of microscopic RRAM mechanisms.

The conductive filament formation is modeled as a metal-oxygen bond breakage and a subsequent out-diffusion of the released oxygen ions. The rates of the oxygen vacancy and ion generation are calculated using a thermochemical model [4]. The 3D temperature map is calculated from the power dissipation by solving the Fourier heat equation, while the power dissipated at isolated and extended defects is directly calculated from the charge transport model, Fig.1.

The charge transport is described by a trap-assisted tunneling (TAT) model including carrier-phonon coupling and lattice relaxation [4], accounting for the role of  grain boundaries as a preferential conductive spots [5]. The reduction of the relaxation energy with increasing the O vacancy density and the electron drift through the defect sub-band at very high O vacancy density are also included.

The model successfully reproduces the current evolution during forming, Fig. 2, and the whole dynamics of the forming process including both charge transport (with the associated temperature increase) and ion diffusion, Fig. 1, as well as the characteristic dependencies on temperature and voltage ramp [1-3]. The concurrent description of charge transport and O ion diffusion allows understanding the effect of forming conditions on the stability of the conductive filament, which is found to be strongly controlled by ramp-rate of the forming pulse, which strongly affects the final ion position  [1].

The simulations of the reset operation (bringing the device into high resistance state, HRS) shows that this process is controlled by re-oxidation of the filament tip caused by field-induced back-diffusion of oxygen ions. The charge transport in HRS is governed by TAT through O vacancies in the re-oxidized CF portion, Fig. 3. Simulations successfully reproduce the measured HRS current [2]. The activation and deactivation of O vacancies is found to be responsible of noise observed on HRS current, which is successfully simulated in both time and frequency domains, Fig. 3.

Fig. 1. Current evolution during forming and the 3D maps of power dissipation, temperature and oxygen vacancy (blue) and ion (red) distributions, simulated on a TiN/TiOy/5nm-HfO2/TiN RRAM device biased at constant voltage of 1.7Va t the end of forming.

Fig. 2. Current evolution measured and simulated during forming on a TiN/Ti/7nm-HfO2/TiN RRAM device.

Fig. 3. a) Schematic illustration of the CF in HRS conditions. Simulations of RTN current fluctuations in time b) and frequency (power spectral density) domain. d) Measured and Experimental and simulated distribution of HRS current amplitude. 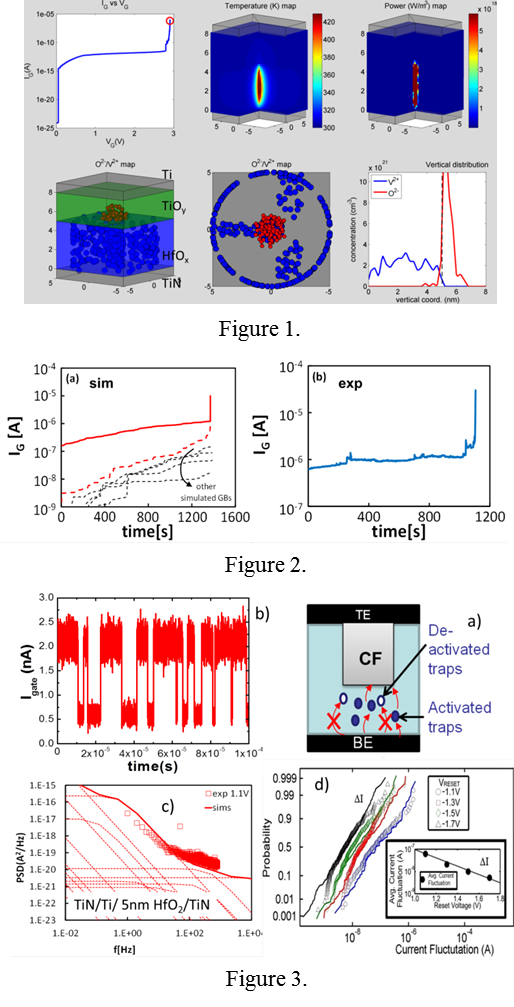