Expo Center, 1st Floor, Center and Right Foyers (Moon Palace Resort)
M. Saito, K. Takahashi (Tokyo University of Agriculture and Technology), and S. Seki (Central Research Institute of Electric Power Industry)
Electrochemical capacitors have attracted increasing attention not only for portable electric devices as smart phone and tablet PC, but also for large power sources in electric vehicles. The advantages of electric double layer capacitors (EDLCs) are high-rate capability and long cycle life, which quite fit the recent needs for smart grid and energy harvesting. The good performances of EDLCs are attributed to the fast charge/discharge mechanism by using electric double layer regardless of the Faradaic reaction with electrodes. However, the main drawback of EDLCs is a small energy density compared with the other energy storage devices, i.e. lithium ion batteries (LIBs), nickel-hydrogen batteries, etc [1]. To overcome this weak point, recently lithium ion capacitors (LICs) using Li pre-doped graphite anodes have been developed and partially released as commercial products. Fig. 1 shows the schematic models for the principles of EDLC and LIC. For the EDLC using two active carbon (AC) electrodes as both cathode and anode, the cell voltage was linearly changed by charging and discharging, which limits the energy density of EDLC to a low level. On the other hand, for the LIC system, the cell voltage becomes much higher by using Li pre-doped graphite anode with a low redox potential and the energy density also increased up to about 3 times larger than that of EDLC. In this study, to further enhance the energy density, we tried to fabricate a new LIC system using Li pre-doped silicon (Si) anode, i.e. Si-CAP (Fig. 2), and investigated the better conditions to prepare the Li pre-doped Si anode for the Si-CAP.

The Si anode was prepared by coating slurry on Cu foil as a current collector. The slurry was prepared by mixing 83.3 wt% Si nano-powder (Alfa Aesar®, Φ = 50 nm), 5.6 wt% Ketjen Black (KB) as a conductive agent and 11.1 wt% carboxymethyl cellulose sodium (NaCMC) salt as a binder. For optimization, two types of thickness for the Si anode were prepared; one was ca. 20 μm and the other was ca. 12 μm. Li pre-doping of the Si anode was carried out by making a contact with Li foil and immersing in 1 M LiBF4 dissolved in propylene carbonate (Kishida Chemical Co, Ltd.), where the treatment time was set to 1, 2 and 3 hours. Coin-type cells with the Li pre-doped Si anodes, AC cathode and 1 M LiBF4/PC electrolyte were fabricated and the electrochemical properties were evaluated by charge/discharge tests in constant current (CC) mode at 30oC.

Fig. 3 shows a typical charge/discharge curve of the Si-CAP with a Li pre-doped Si(thick, 2 h) anode. The cell voltage successfully increased up to 4.2 V vs. Li/Li+ and the charge/discharge curve was bent upward (not linear). These indicates that the Li pre-doped Si anode worked well as low potential redox electrode and increased the cell voltage of Si-CAP. The plots of discharged energy densities vs. cycle number for the Si-CAPs with various Li pre-doped Si anodes were shown in Fig. 4. For the EDLC using the same electrolyte (1 M LiBF4/PC), the energy density was ca. 40 mAh g-1, which was very stable during 50 cycles. On the other hand, all the Si-CAPs exhibited higher energy densities although the energy densities decreased with the charge/ discharge cycling. In comparison of the Si-CAPs with Si(thick) anodes, the energy density increased with an increase in the Li pre-doping time. However, the decrease in energy density was also more rapid and significant. This implies that the extension of Li pre-doping time caused to large volume change of Si nano-powders and gave a bigger damage. Therefore, to improve the method of Li pre-doping we used a thinner Si anode, which was easy to conduct the Li pre-doping in short time (1 h) and made the treatment more homogeneous. As a result, the Si-CAP with Si(thin, 1 h) anode exhibited the highest energy density of over 400 mAh g-1(Si), and 292 mAh g-1(Si) was remained even after 50 cycles, which was more than 7 times larger of that of EDLC. Therefore, the Si-CAP was quite attractive as one of the next-generation energy storage system. Further optimization of Li pre-doped Si anode and the cell performances will be discussed in the meeting.

This study was supported by JST “A Tenure-track Program” from MEXT, Japan. 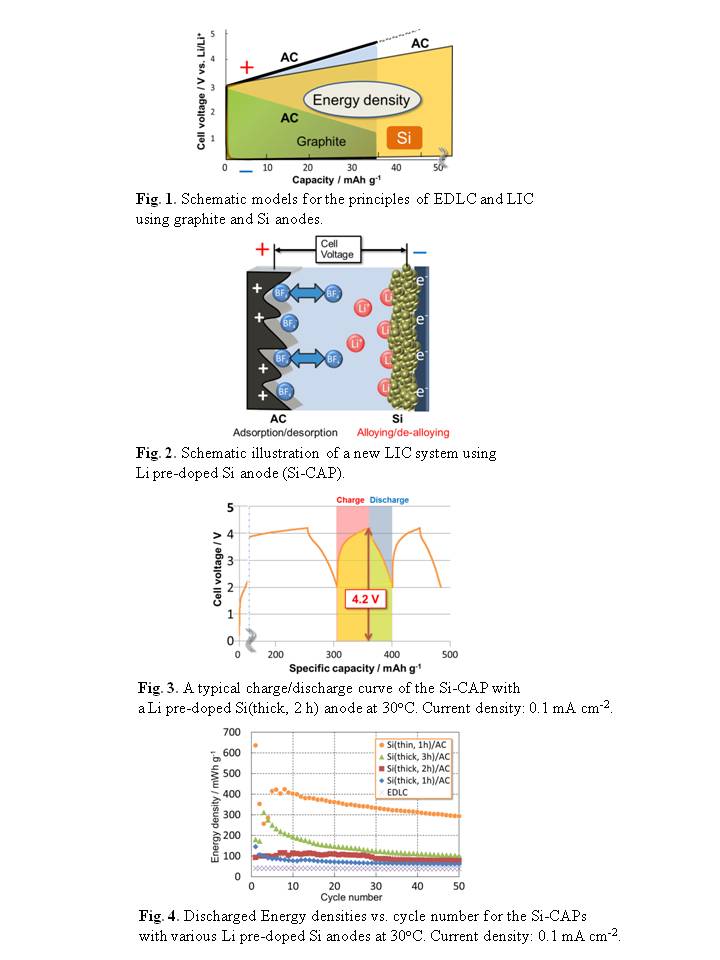