A paper arguing an IGZO film with amorphous structure has been published in 2004 [3, 4].  The authors of the paper define the amorphous structure [5].  Following the definition, we conducted reproductive experiments of amorphous-IGZO (a-IGZO).  As a result, we found crystalline structure existing at least in a part of the film described as a-IGZO, but such amorphous structure as defined by them was not confirmed.  Accordingly, we believe that a crystalline structure of (Ga,Zn)O/InO2/(Ga,Zn)O which is a basic homologous structure is necessarily formed, that is, the amorphous structure is not formed at the time of film formation by sputtering.  We analyzed in detail the film prepared under the same processing conditions as a-IGZO, which we call amorphous-like IGZO (a-like IGZO) film, and found from cross-sectional TEM images that the film macroscopically had many voids grown in a direction perpendicular to the substrate (Fig. 1).  We also found from TDS measurement that the film contained much water.  Since TFTs using the film have a large variation of Id-Vg characteristics as shown in Fig. 1, it is expected that practical use of such TETs is impossible.

In addition, we tested the effect of electron-beam irradiation on each of a-like IGZO, nc-IGZO and CAAC-IGZO films.  As a result, we found that crystallization proceeded only in the a-like IGZO film and the a-like IGZO became unstable whereas the nc-IGZO and CAAC-IGZO films remained unchanged and stable.  Since basic materials for commercial products need to be durable and stable, CAAC structure is considered most suitable.

CAAC-IGZO is applied to not only displays but also LSIs.  Examining frequency characteristics with a scale of channel length L = 60 nm, we obtained a cutoff frequency of 2 GHz, and in a memory cell with a capacitance of 1 fF, we achieved a nanosecond-order writing time.  Furthermore, we succeeded in lowering Ioff of FET with the channel length of 0.8 μm to 1 yA/μm (1 × 10-24 A/μm) under the condition of 85 °C.  We are opening the new possibility of nonvolatile oxide semiconductor random access memory (NOSRAM, flash memory that endures 1012-time or more rewrites without deterioration), extremely-low power consumption of normally-off CPU, and incorporation of NOSRAM with other memories in CPU.  The details will be discussed in our presentation. 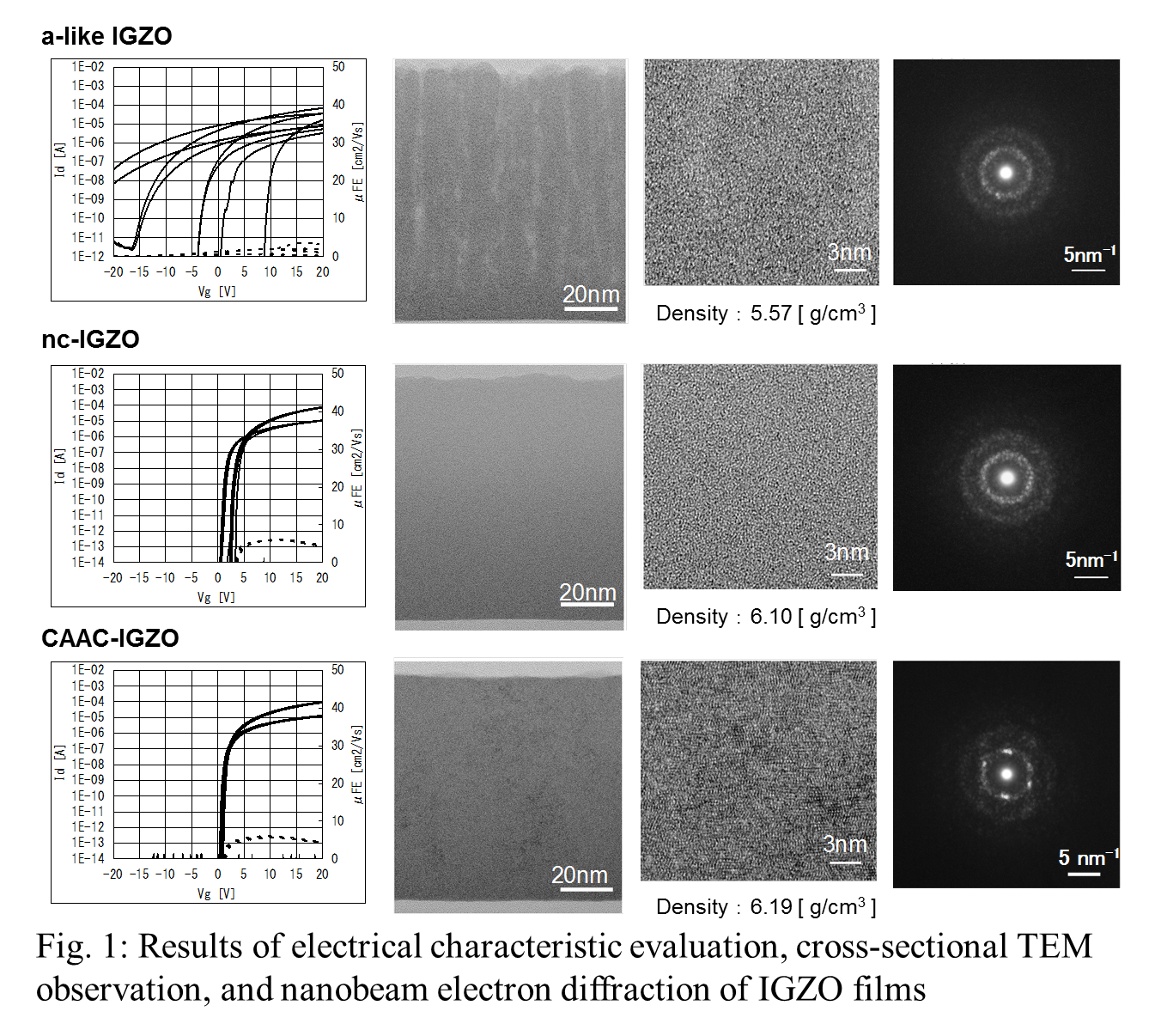