Infrared absorption measurement of (substitutional) carbon concentration [Cs] in Si crystal meets many problems. Its practical detection limit is around 5E+15 cm-3 and [Cs] estimated to be below that is inaccurate due primarily to that the concentration of nominally “carbon-free” reference crystal is around that and “unknown.” Thus it is impossible to measure the carbon concentration of modern commercial  Si crystal, estimated to be between 5E+15 and 5E+14 cm-3. Moreover it is inconvenient that the standard measurement procedure requires 2 mm thick, double sides mirror polished samples [1]. It is hard to prepare such a sample, because the “as-cut” wafer in factory usually is thinner than that. To solve one of the problems, we have previously established to reduce [Cs] in a reference sample well below 1E+15 cm-3 by the electron irradiation [2]. Here we got the good result covering the above range, by improving the measurement of CiOi introduced by the electron irradiation, proposed about 30 years ago [3].

The samples were prepared from CZ and FZ crystals. [C] in most samples was calibrated by using the samples with known [C] obtained by charged particle activation analysis. Electron was irradiated at RT for 1E+15 to 3E+17 cm-2. Most sample thickness was 2 mm and both sides were mirror polished. 1 mm thick samples were also prepared for some samples. Infrared absorption measurement was done using FTIR on the absorption line of CiOi at 862 cm-1 at RT. The detection limit was 2E-6 of peak absorbance at best [4]. The wavenumber resolution was 2cm-1. Samples were also prepared from high [C] crystals and poly-Si crystals.

Figure 1 shows the relation between [C] (cm-3) and the absorption coefficient by CiOi (cm-1). The results for [C]>1E+16 cm-3 were taken from the previous paper [3]. The absorption by CiOi increased, saturated and turned to reduce by the dose increase. The maxima were shown here. Those for [C]<1E+16 cm-3 were obtained in this work. Both results showed nearly same dependence. The dose for maxima was around 3E+16 cm-2 for estimated [C] below 1E+15 cm-3 and 1E+17 for [C] around 1E+15 cm-3. They were lower than those for higher [C] reported previously [3]. Thus it was confirmed that [C] could be estimated for down to 1E+15 cm-3 by measuring the absorption by CiOi. The open circle below 1E+15 cm-3 was plotted against the estimated [C]. Tentative calibration line was drawn in the figure.

It was confirmed that the reference with [C] well below 1E+15 cm-3 could be prepared by the electron irradiation.

Fig. 1 The relation between carbon concentration [C] and absorption coefficient by CiOi. 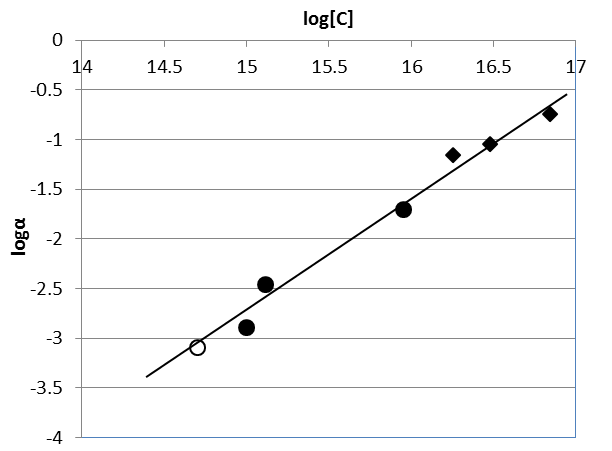