Expo Center, 1st Floor, Universal 18 (Moon Palace Resort)
J. Müller, P. Polakowski (Fraunhofer IPMS-CNT), S. Müller, and T. Mikolajick (NaMLab gGmbH)
Some dielectrics possess the capacity for remembering their electric, magnetic or caloric history. For the extensively investigated ferroelectrics this ability to memorize manifests in atomic dipoles switchable in an external electric field. With this unique ability at hand it came as no surprise that only a few years after the realization of a working transistor the introduction of ferroelectrics to microelectronics was proposed [1]. It seemed obvious: ferroelectrics are the perfect switch for semiconductor memories.

More than 60 years and several iterations later it is now clear that the success or failure of ferroelectric random access memory is mainly determined by the proper choice and engineering of the ferroelectric material. Perovskite ferroelectrics and related electrode systems underwent an extensive optimization process to meet the requirements of CMOS integration and are now considered the front up solution in FRAM manufacturing [2]. However, those perovskite systems pose scaling limitations on 1T and 1T/1C FRAM that until now remain unsolved.

With the recent demonstration of ferroelectricity in HfO2-based systems (FE-HfO2) a CMOS-compatible, highly scalable and manufacturable contender has emerged that significantly expands the material choice for 1T and 1T/1C ferroelectric memory solutions [3 and references therein]. As depicted in Fig. 1, HfO2 thin films provide ferroelectricity down to the single digit nanometer range, allow for a fabrication of ferroelectric field effect transistor at the 2X nm node and provide access to the third dimension for the scaling of capacitor based ferroelectric memories. Additionally, temperature stable ferroelectric properties as well as a high flexibility in terms of thermal treatments have been observed in FE-HfO2 thin films. However, at the current stage of development the cycling endurance of these new HfO2-based ferroelectrics remains limited to ~1010 switching cycles in metal-ferroelectric-metal (MFM) capacitors and ~105 in metal-ferroelectric-insulator-semiconductor FETs (MFIS-FETs).

In this paper we will review and expand the current understanding of ferroelectricity in HfO2, as well as discuss future prospects of ferroelectric HfO2-based devices with respect to scaling, reliability and manufacturability. The following key aspects will be covered:

The work for this paper was supported within the scope of technology development by the EFRE fund of the European Community and by funding from the Free State of Saxony (Project MERLIN / HEIKO / Cool Memory). 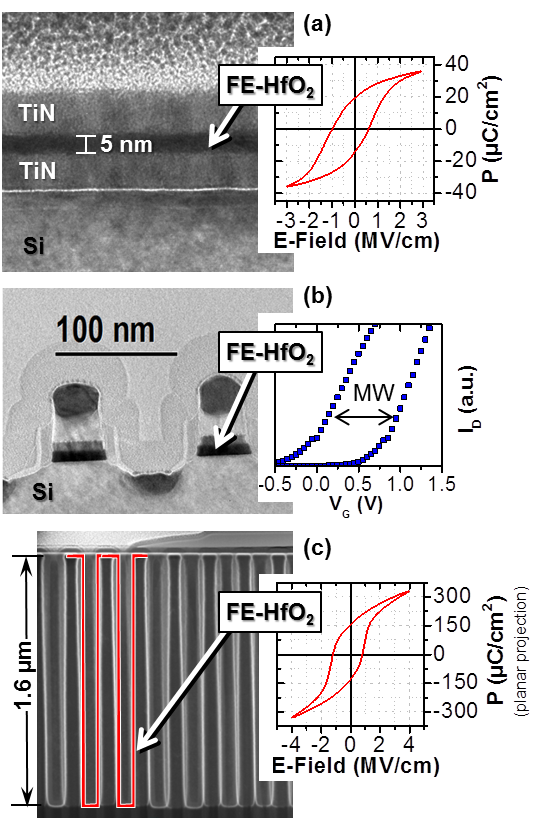