Expo Center, 1st Floor, Universal 18 (Moon Palace Resort)
D. Ielmini, S. Ambrogio, and S. Balatti (Politecnico di Milano)
The electrochemical memory (ECM) is one of the most promising technologies for storage class memories, thanks to low-power operation, fast switching and large on/off ratio. To develop scalable ECM, the switching mechanism and filament stability must be carefully understood. In this work, we show that the switching characteristics of Ag-GeS2are strongly asymmetric, which is interpreted by the mechanical stress around the conductive filament (CF) in the set state. CF instability after pulsed set is also evidenced and explained in terms of the compressive stress. Stress relaxation is shown to significantly stabilize ECM, thus providing new guidelines to improve stability at low set/reset power.

Fig. 1a shows the measured I-V curves for ECM devices with GeS2 electrolyte and Ag active top electrode (TE). Set transition at positive voltage is due to the migration of ionized Ag from the TE, resulting in the formation of a conductive filament (CF) connecting TE and bottom electrode. The reset transition at negative voltage is due to the retraction of the CF back to the TE. By changing the compliance current IC during set, the CF size (hence resistance R) can be controlled. The switching curves in Fig. 1a are asymmetric in that the reset current Ireset is markedly lower than IC. Fig. 1b, c and d summarize R, Ireset and the ratio η = Ireset/IC as a function of IC, highlighting asymmetric switching with η < 1.

Set/reset transitions are modeled by CF growth driven by ion migration according to the formula:

where Φ is the CF effective diameter controlling R, A is a pre-exponential constant, k is the Boltzmann constant and T is the local effective temperature at the CF. The activation energy is given by EA = EA0 – αqV, where EA0is the energy barrier for migration, V is the voltage across the CF and a accounts for barrier lowering. Calculation results are shown in Fig. 1, in close agreement with data.

To reproduce the asymmetric switching in Fig. 1, different barriers EA0,set = 0.95 eV and EA0,reset = 0.5 eV were assumed for set and reset, respectively. The different barriers can be understood by the gradient of the mechanical stress surrounding the CF in the set state, as described in Fig. 2. At set transition (V = Vset, see Fig. 2a), ionized defects migrate from the TE, causing CF growth and mechanical-stress buildup. The calculated stress in the set state (red = compressive, blue = tensile) is shown in Fig. 2. The stress contributes an elastic energy term U in Fig. 2b which opposes to further migration. On the other hand, U enhances defect migration back to the TE during reset, since this reduces the overall elastic energy (Fig. 2c). The stress contribution to EAthus reads:

where positive and negative signs of U apply to set (increases EA) and reset (reduced EA), respectively. The opposite contributions of U during set and reset cause asymmetric switching, namely Ireset < ICin Fig. 1.

The model in Fig. 2 suggests that the set state is less stable than the reset state, due to the compressive stress favoring the spontaneous retraction of the CF. This is confirmed by fast set/reset I-V curves in Fig. 3, where the set/reset sweep time was tset = treset = 1 ms, while the delay between set and reset was increased from tdelay= 1 ms (a) to 10 s (b). The latter case indicate high R during the reset sweep due to spontaneous dissolution of the CF.

CF instability is instead not observed after DC set, which can be understood by the stress relaxation due to prolonged Joule heating during the set process. This is confirmed by the measured Vreset as a function of the set pulse-width tset in Fig. 3c. The increase of Vreset at increasing tset indicates that the elastic energy U, which acts as an additional driving force of defect migration back to the TE during reset in Eq. (2), decreases with tset. On the one hand, Joule heating assists migration and CF growth, resulting in a decrease of R (Fig. 3d), while on the other hand leads to suppression of stress, hence of U, evidenced by the increase of Vreset. Calculations with Eqs. (1)-(2) and a time-dependent stress-relaxation model are shown in Fig. 3. These results support careful pulse optimization and stack engineering for suppressing stress effects and stabilizing the CF in ECM devices. 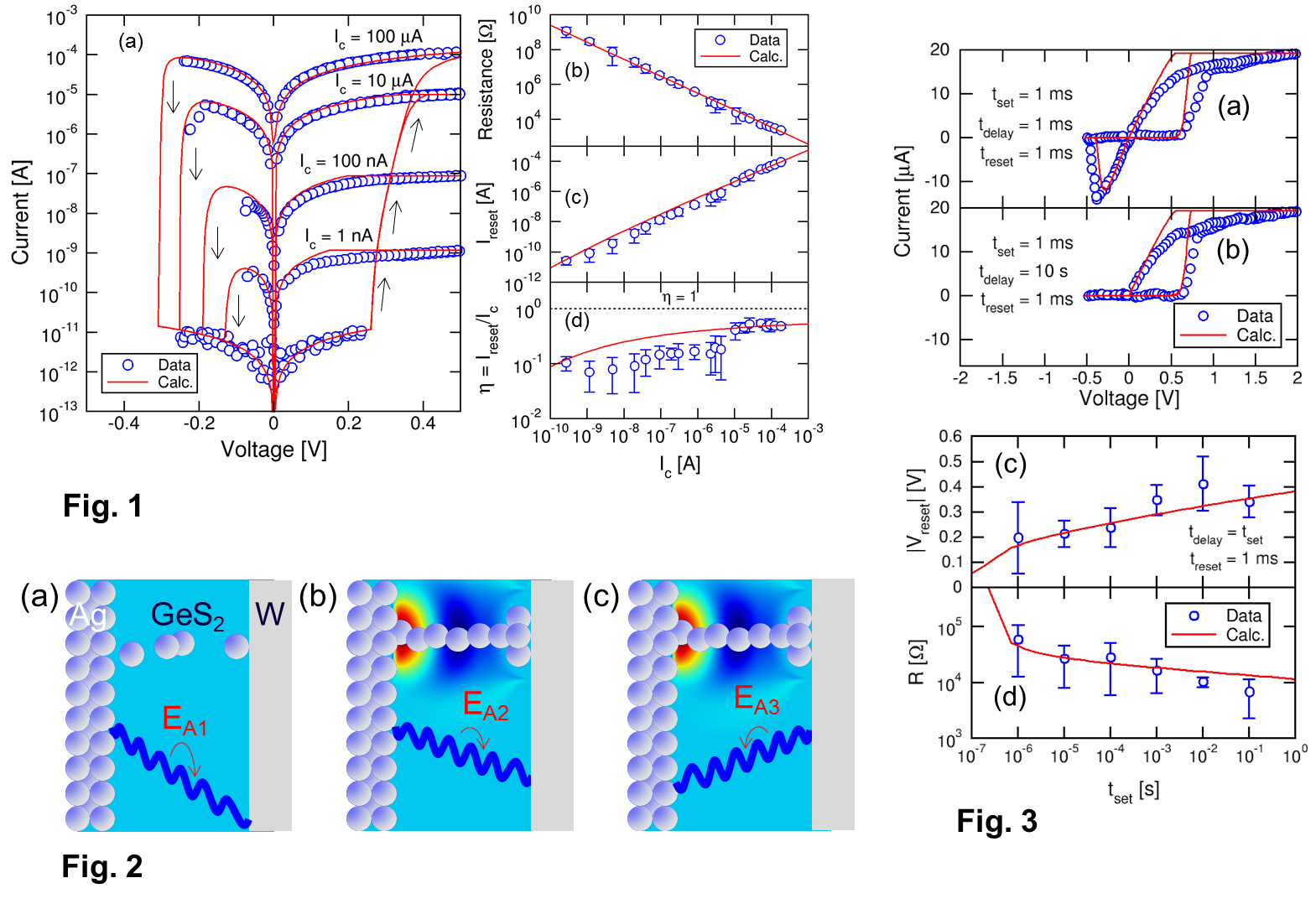