Sunrise, 2nd Floor, Galactic Ballroom 7 (Moon Palace Resort)
K. Sasaki, Z. Noda, T. Tsukatsune, K. Kanda, Y. Takabatake, Y. Nagamatsu, T. Daio, S. M. Lyth, and A. Hayashi (Kyushu University)
Even though the commercialization of fuel cell vehicles may start from 2015 in some countries, the durability of electrocatalysts is still an important technological issue. Among various degradation mechanisms, start-stop-cycle up to a high potential can cause carbon corrosion related degradation [1-3], one of the major degradation mechanisms of fuel cell vehicles. Since the exchange of gas atmosphere often happens in fuel cell vehicles, the robustness against such severe operational situations must be fulfilled. For other types of fuel cell vehicles such as buses, trucks, and other industrial transportation applications, much longer and severer durability must be satisfied which requires further improvement in cycle durability of PEFC electrocatalysts. Various alternative electrocatalyst support materials have been proposed so far, including graphitized carbon black [4], meso-porous carbon [5], graphene [6], and carbon nanofibers [7].

In general, as thermochemically calculated and shown in Fig. 1 [8], oxides e.g. SnO2could be alternative support materials to the conventional carbon black [9-12]. Even though their excellent stability and thus durability against voltage cycling, have been demonstrated for catalyst powder samples, such cycle durability must be fulfilled for MEA. In addition, catalytic activity comparable to the conventional Pt/C electrocatalyst should be demonstrated.

Figure 2 shows the dissolution of ions from Pt/MeOx (M: Mo, Sn, Nb, Ta, Ti, and W) electrocatalysts. It has been demonstrated that most of these oxides are relatively stable under PEFC cathode conditions with start-stop cycles. CV and ECSA were measured, revealing that these oxides such as SnO2, TiO2, and WO3 were relatively stable to exhibit negligibly low dissolution. Figure 3 shows high-resolution TEM micrograph revealing that Pt particles were well connected to the SnO2 crystals with a certain crystallographic orientation. Specific activity was measured for these electrocatalysts with different Pt particle sizes and thus different ECSA. Figure 4 reveals that specific activity can reach beyond 200 mA cm-2Pt at 0.9 VRHE, one of the highest reported values for such oxide-supported electrocatalysts. MEAs using Pt/doped SnO2 have been prepared and cycle durability has been analysed along with the FCCJ protocol. We have revealed that doped-SnO2 is a promising electrocatalyst support material with the 60,000-cycle durability between 1.0 and 1.5 VRHE, as shown in Fig. 5. All these results indicate that conductive oxides can be promising electrocatalyst support materials which could satisfy both cycle durability and suitable catalytic activity for oxygen reduction reactions. 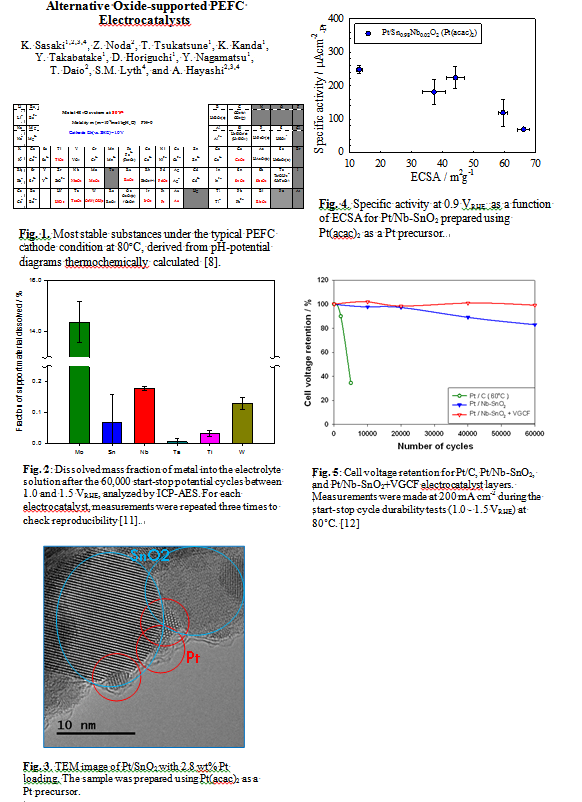