Sunrise, 2nd Floor, Galactic Ballroom 7 (Moon Palace Resort)
Y. Liu, S. Zhao, and W. E. Mustain (University of Connecticut)
Though proton exchange membrane fuel cells (PEMFCs) are at the cusp of widespread commercialization, there are several issues that must be addressed to improve their long-term reliability.  One considerable improvement to existing PEMFC systems would be in incorporation of higher stability electrocatalysts, while concomitantly improving activity to reduce loading and cost, at the oxygen reduction cathode.

Recent work in our group has focused on investigating the intrinsic stability of Sn-doped indium oxide [1] as well as its activity and stability in the ORR environment [2].  This work has even included the investigation of the influence of Pt loading on ITO and its effect on the oxygen reduction activity and Pt/ITO stability [3].  One of the more interesting findings for Pt/ITO prepared by galvanic displacement is that low Pt loadings yield a single type of particle with preferential {111} faceting, which gives yields its characteristic high activity.  However, at higher loading secondary particles with a completely different structure emerge.  One of the most interesting open questions is how these two particle types influence the activity and stability of the Pt/ITO.

In this work, we present a statistical model that utilizes a modified Poisson probability distribution function to understand how the primary and secondary Pt nanoparticles grow during the galvanic displacement.   The statistical model is also used to predict the specific and mass activity of the Pt/ITO as a function of Pt loading.  The model prediction and experimental results for the specific activity are shown in Figure 1.  Excellent agreement was observed between the theoretical prediction and the experimental data.  Also, an interesting oscillatory behavior was predicted, which also appears corroborated by the experimental data.  The behavior is caused by the counterbalancing of the high activity of the preferentially faceted Pt/ITO nanoparticles and the secondary particles that show and activity similar to Pt supported on carbon.  The number of {111} also clearly plays a role [4], which is built into the model.

This talk will focus on the model development, calculation of model parameters, and linking critical elements of the model to the activity and stability of Pt/ITO electrocatalysts for the oxygen reduction reaction. 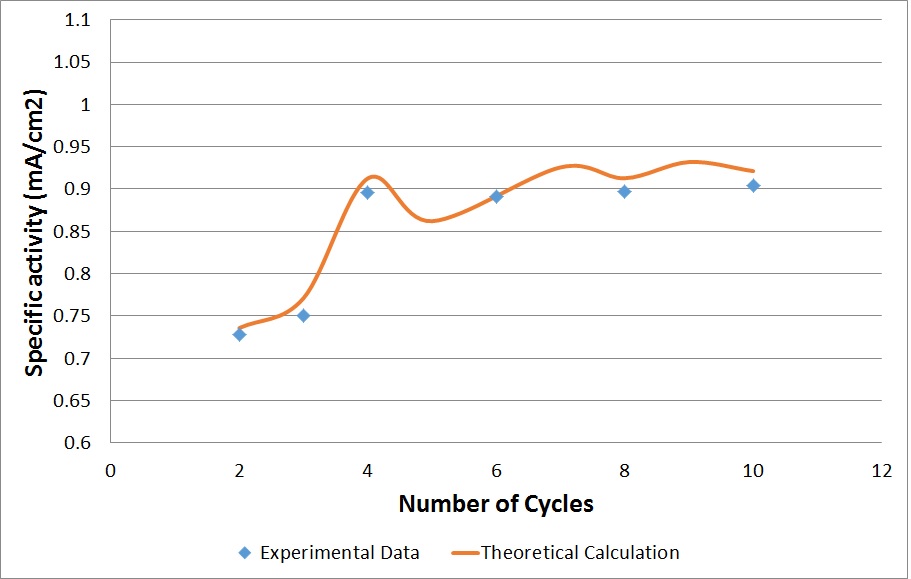