III-V fin-shaped field-effect transistors (FinFETs) are considered to be attractive candidates for high-performance n-type FETs, thanks to both the light electron effective mass and to the improved electrostatic control. III-V FinFETs integrated on a Si substrate are advantageous with respect to their cost effectiveness. Aspect Ratio Trapping (ART) is one of the possible integration roads to be followed to achieve the growth of non-silicon channels on a Si substrate by reducing the density of defects obtained in the filled trenches [1]. In the ART process, the III-V fin is grown inside trenches of SiO2by using a metal organic vapor phase epitaxy (MOVPE) process, which implies that the precursors interact not only with the semiconductors but also with the oxides. The reaction of the precursors with the oxides could lead to the formation of defects around the interface which could be responsible for the degradation of the electrical reliability of III-V FinFETs. In this study, we report the evaluation of the formation of defects due to the reactions between the precursors and the oxides using first-principles simulations.

The formation enthalpies [2] of the defects are calculated using the Quantum Espresso package [3] based on density functional theory. The lower the formation enthalpy is, the more likely the reaction is to occur. We used the Perdue-Burke-Ernzerhof exchange-correlation potential [4] combined with ultrasoft pseudopotentials to compute the energetics of the reactions. The charge states of the defects are assumed to be neutral. One of the considered reactions consists into the formation of interstitial defects in SiO2 due to the diffusion of the III-V components and of the doping atoms from the precursors. The list of considered precursors and oxides are summarized in Table 1. Mg and Zn could be used as acceptor doping sources for the III-V compounds. For the SiO2, an amorphous model is used, built from classical molecular dynamics simulations with the LAMMPS package [5].

Fig. 1 shows the calculated formation enthalpies. For the precursors, we also envisaged some intermediate atomic configurations that correspond to the transition products active during the MOVPE process. Our simulations show that the initial states of the precursors have high formation enthalpies, indicating that there is no driving force to promote the diffusions of the III-V elements and of the dopants into the STI. However, as the growth proceeds and that the precursors begin losing their organic ligands, the formation enthalpies are significantly reduced. Zn and Mg have the lowest formation enthalpies of all of the reactants considered, which suggests that the diffusion of doping sources into SiO2 could be favored. In order to confirm the latter for the Mg case, secondary ion mass spectrometry  measurements (SIMS) were performed on a SiO2 blanket exposed to the Mg-precursors (see Fig. 2). The diffusion of Mg is clearly observed near the SiO2surface, which is consistent with the theoretical picture (Fig. 1).

In order to prevent these defect-related issues, it will be important to understand a risk of formation of defects using the ab initio approaches.

This work has been supported by the IMEC core partners and IMEC Industrial Affiliation Programs (IIAP). 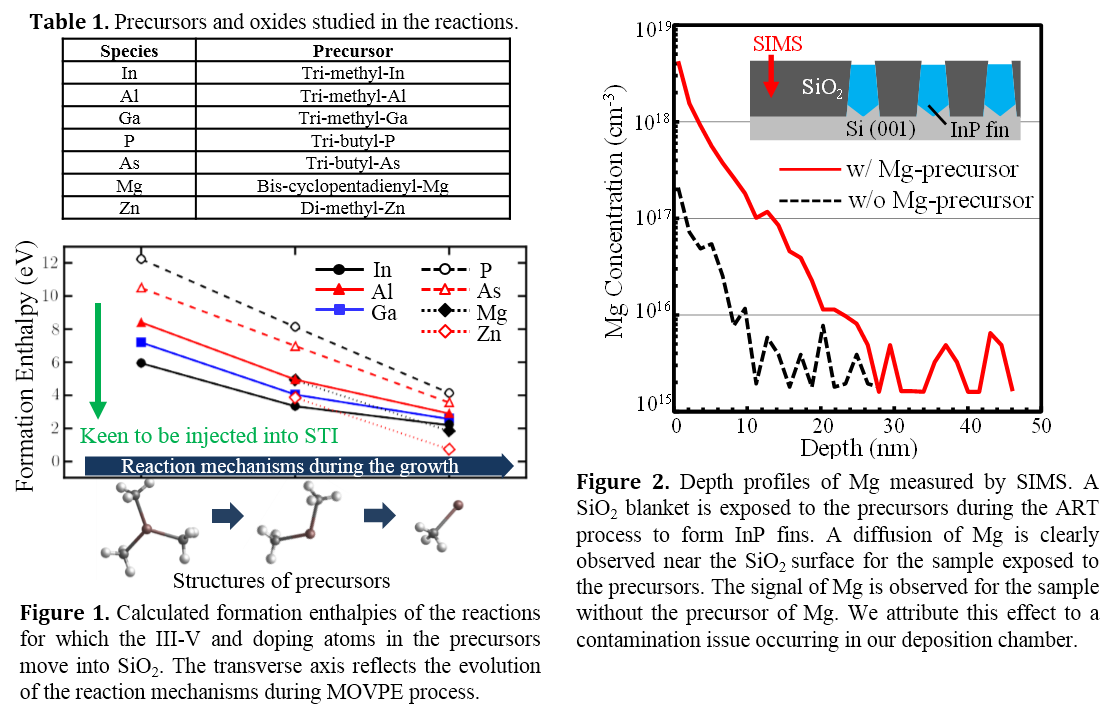