Stabilized lithium metal powder (SLMP®) is an enabling material and technology developed by FMC that is able to provide the electrochemically rechargeable lithium atom as the energy carrier for all types of lithium-based energy devices.  SLMP is comprised of coated, spherical particles with controlled particle size and surface area. The thickness and chemistry of the protective coating layer can be tailored and engineered based on user preference. SLMP can be safely introduced to the energy storage devices in a dry room atmosphere. Extensive studies have been done for using SLMP in Li-ion battery energy storage systems 2. Zhang et al. have reported a LIC with activated carbon cathode and hard carbon (HC)+SLMP anode electrodes with high energy density, high power density and long cycle life 3.  In this presentation, we would like to report the detailed optimization of the cathode configuration, SLMP loading on anode, and type of separator for LIC.

The LIC performance effect of SLMP loading on the HC anode electrode has been studied.  It can be seen from Table 1 that the difference between LIC#2, LIC#3, LIC#4 and LIC#5 is the mass ratio of SLMP to HC.  Increased SLMP loading on HC anode results in higher OCV since the degree of the Li intercalation into the anode is higher and the potential of HC+SLMP anode vs. Li/Li+ is lower. The effect of SLMP loading on rate capability has been measured.  When the current density increases from 0.6 to 24 mA/cm2, the discharge capacity retention of LIC#2, LIC#3, LIC#4 and LIC#5 is approximately 57.6%, 53.5%, 28.7% and 20.6%, which demonstrates that the LIC pouch cell with more SLMP loading on the anode can achieve higher rate performance

The cycle performance of LIC#2, LIC#3, LIC#4 and LIC#5 at a current density of 6 mA/cm2is shown in the figure. Table 2 displays the detailed comparison of the capacity at different cycle numbers between these four LIC cells. For LIC#3, there is a drop from cycle 2562 to 2563 as shown in the figure which is usually due to movement of the pouch cell during cycling. It can be seen from Table 2 that for the first 5000 cycles from 3.8 to 2.8 V, the capacity retention of LIC#2, LIC#3, LIC#4 and LIC#5 is 94%, 92%, 82% and 81%, respectively, which indicates that more SLMP loading on HC anode can improve the cycle life of the LIC pouch cell. However, when the charge-discharge voltage range is changed to 3.8-2.2 V from cycle number 5005 through cycle 10000, the capacity retention of LIC#2, LIC#3, LIC#4 and LIC#5 is 81%, 88%, 79% and 91%, respectively. Although LIC#5 displays the best capacity retention, the discharge capacity at cycle number 10000 is about 2 mAh, which is much less compared to that of LIC#2 (10.8 mAh) and LIC#3 (10.7 mAh). LIC#5 contains much less lithium and therefore the integrity of the electrode is maintained due to the reduced volume change in the shallow charge/discharge process.  It is not reasonable to sacrifice the capacity for cycle life of LIC, so again a 1:7 SLMP to HC ratio gives the optimum performance in this study.

Table 1. Summary of components and parameters for LIC pouch cells 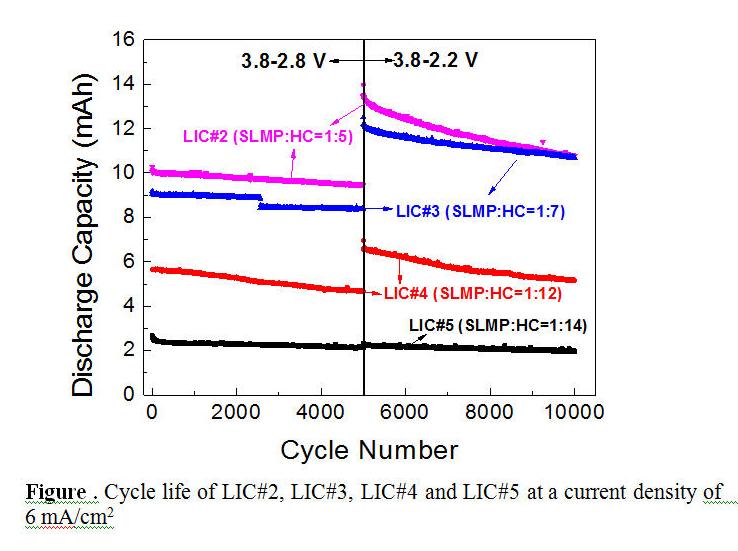