Since the electroless Cu deposition reaction involves both oxidation of formaldehyde and reduction of Cu2+ ion, the effect of TU on each reaction should be evaluated separately. For this, we employed “separated bath” system [3]; the bath without Cu2+ ion (oxidation bath), in which the only oxidation of formaldehyde proceeds, and the bath without formaldehyde (reduction bath), in which the only reduction of Cu2+proceeds, are connected with copper wire as shown in Fig. 1. The conditions of each bath are listed in Table 1.

When TU is added only to the oxidation bath, current density steeply decreased as shown in Fig. 2 (a), indicating that TU inhibits the oxidation of formaldehyde. On the other hand, when TU is added only to the reduction bath, current density slightly increased as shown in Fig. 2 (b), indicating that TU accelerates the reduction of Cu2+, probably due to the capturing effect of TU on Cu2+around the interface [4]. Overall, TU suppresses the Cu deposition reaction by inhibiting the oxidation reaction of reducing agent.

This work was financially supported in part by Grant-in-Aid for Scientific Research (A) and “Development of Systems and Technology for Advanced Measurement and Analysis” program of the Ministry of Education, Culture, Sports, Science and Technology (MEXT), Japan. 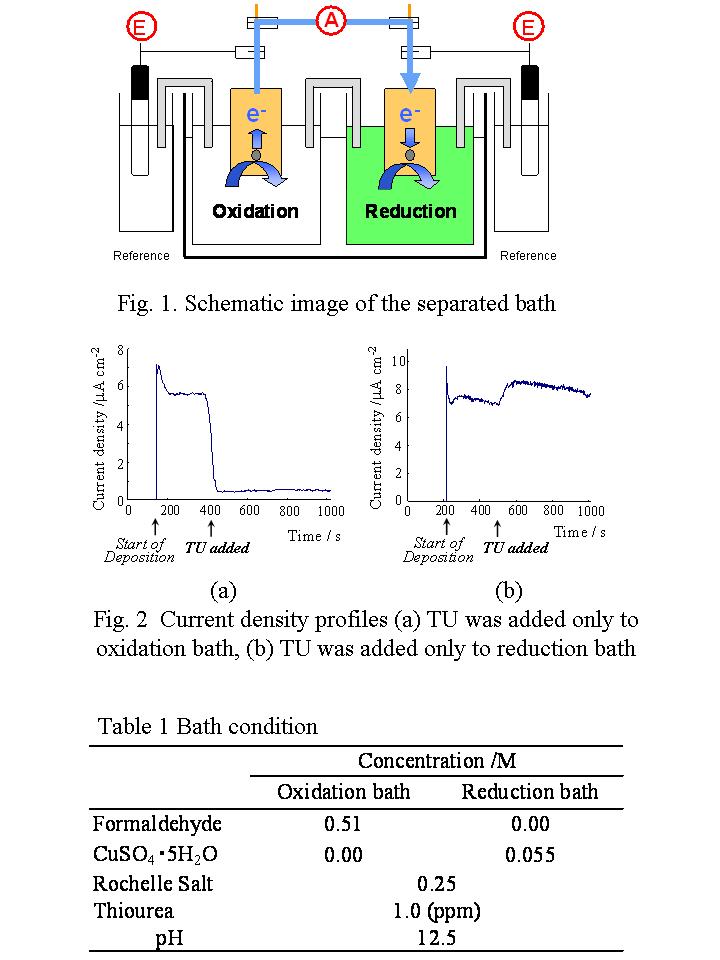