Sunrise, 2nd Floor, Star Ballroom 1 (Moon Palace Resort)
P. N. Kumta, P. Jampani, P. Patel (Department of Chemical and Petroleum Engineering, University of Pittsburgh), and O. I. Velikokhatnyi (University of Pittsburgh)
Charge storage behavior in nitride nanomaterials depends on a number of particle properties and also on the nature of the electrode (1-9). Vanadium nitride is a promising supercapacitor material on account of pseudocapacitance arising from the surface oxide/oxynitride phase interactions. We have previously reported excellent charge storage behavior of nanoparticulate vanadium nitride on account of the surface reactions occurring on the surface of the oxide exo-shell. Vanadium oxide is a superior pseudocapacitor material but suffers from poor electronic conductivity(10). Forming a thin surface oxide layer on nanoparticle nitrides yields the benefits of the charge storage along with charge storage occurring in the nitride core itself. However, there is evidence showing that the surface oxide suffers from instability in highly alkaline solutions on account of side-reactions. In addition, the core nitride itself becomes a poor conductor when prepared as fine nanoparticles (<10 nm)(3). In this study, we tailor nitride nanoparticles to engineer architectures similar to that shown in Figure 1by the use of suitable dopants. By using wet chemical procedures, we generate a number of doped nitrides with doped surface oxide structure. We use ab-initio first principle studies to guide our dopant selection with improved electronic conductivity of surface oxide/core nitride and stability of surface oxide being parameters driving our dopant selection. We demonstrate in this study doped VN with superior electronic conductivity, high capacity and long cycle life. In-depth surface characterization using XPS and electrochemical impedance spectroscopy (EIS) to probe change in charge-storage mechanisms are conducted herein to obtain fundamental understanding into the nature of the various doped nitride materials. Change in nanoparticle morphology and surface composition are also examined and related to charge storage behavior. Results of these studies will be presented and discussed. 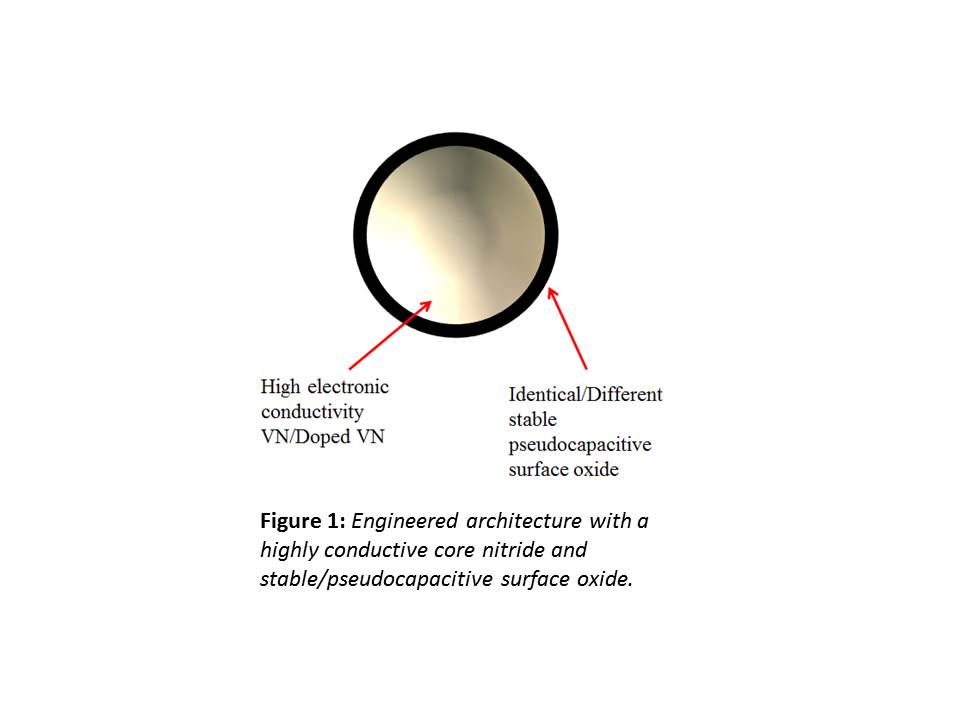