Conference Room 4F (Hilton Chicago)
P. Gautier, A. Vallée (ILV- CNRS - UVSQ), A. Etcheberry (Institut Lavoisier de Versailles, UVSQ), and N. Simon (ILV- CNRS - UVSQ)
ZnO is a wide band gap (3.32 eV) semiconductor with n-type conductivity, which is used in many devices for different applications, including gas sensors, transparent electrodes, and acousto- and electro-optical devices. Recently, the combination of ZnO with boron-doped-diamond (BDD) was used in order to make heterojunctions [1], surface acoustic-wave (SAW) devices [2] and biosensors electrodes [3]. On the majority of presents works, ZnO was deposited on BDD by chemical vapor deposition (CVD) [4], magnetron sputtering [5] or atomic layer deposition (ALD) [6]. The electrodeposition represents an interesting new way for the deposition of ZnO on BDD. The electrodeposition of ZnO has been successfully performed on many conductive substrates [7] but only one time on BDD [8]. This chemical route presents a few advantages such as low cost and possibility to obtain a large range of structures from the dense layer up to well-defined nanostructures.

The electrodeposition of a metal oxide such as ZnO consists to a redox process at the electrode surface, to raise the local pH and then to precipitate an oxide or hydroxide phase. Three different precursors can be used to produce hydroxide at electrode surface: hydrogen peroxide, nitrite salt or dissolved oxygen. This last one is used in our work. Dissolved oxygen is reduced, raising the local pH on the conductive diamond electrode and causing the precipitation of zinc hydroxide [9]. Then the dehydration of hydroxide leads to zinc oxide according to the following scheme.

In this work, zinc chloride (ZnCl2) as precursor is used for the first time on BDD and potassium chloride (KCl) as support electrolyte. Our aim was to study the influence of deposition parameters such as zinc precursor concentration, substrate’s surface chemistry or bath temperature, on ZnO morphologies. The resulting ZnO deposits were characterized using X-ray Diffraction (XRD) and scanning electron microscope (SEM).

The effect of [Zn2+] is illustrated on figures 1 and 2. As evidencing by XRD (Fig. 1), deposits obtained at 60°C, on as-grown BDD substrate, with 1 mM and 5 mM of Zn2+ correspond to well-crystallized zinc oxide. In both cases, the intensity of diffraction peak (002) indicates a preferential growth to the c-axis. The diffraction peaks from the substrate are labeled with an asterisk.

Finally, our work shows that electrodeposition of ZnO is fully applicable on diamond substrate. And, parameters such as concentration of Zn2+, BDD’s surface chemistry or bath temperature, allow modifying the morphology of deposits. 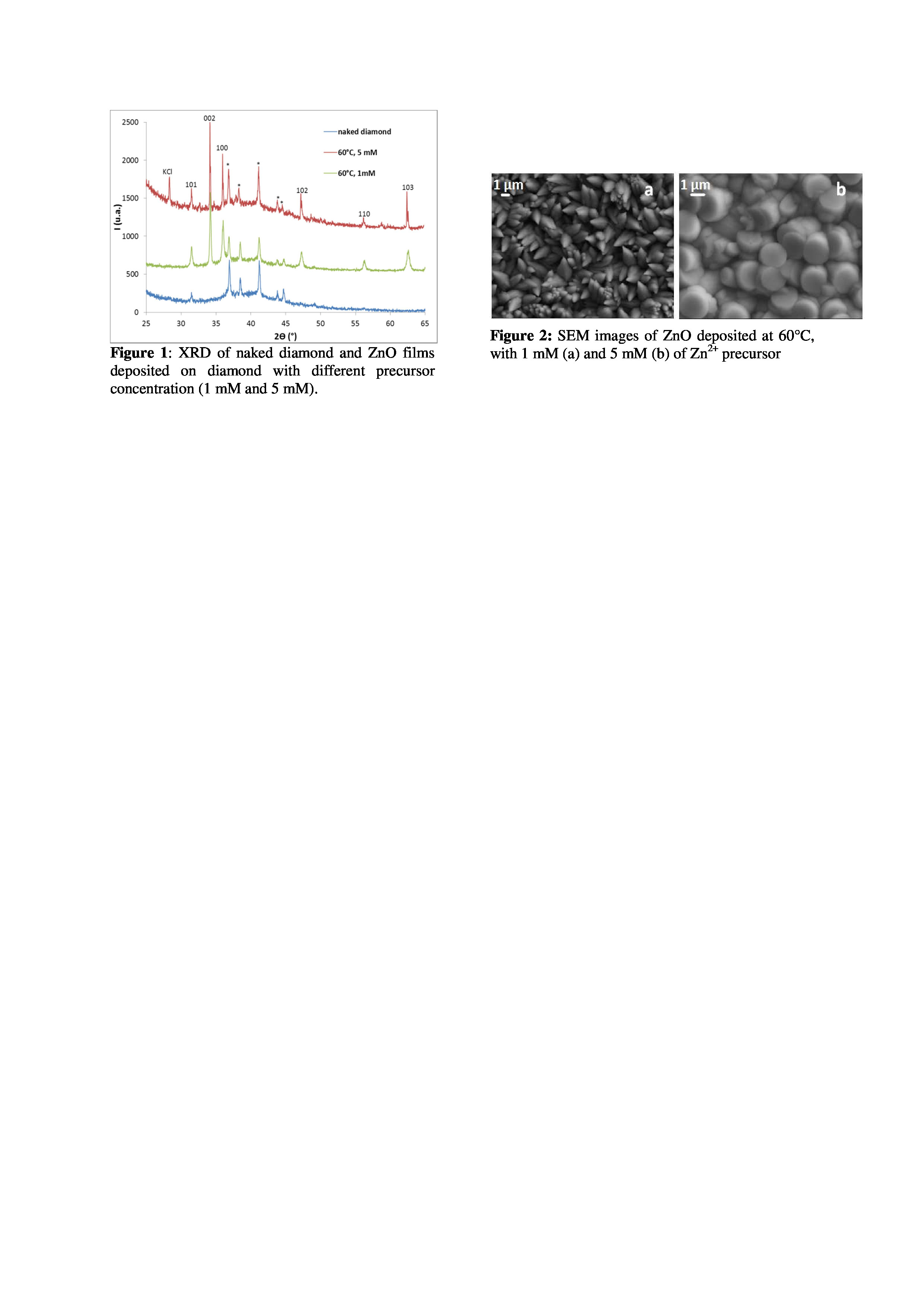