1316
Investigation of Photoelectrochemical Deposition of Zn(S,O) Via Nitrate Ions Reduction in the Presence of Thiourea

Conference Room 4F (Hilton Chicago)
S. Gallanti, E. Chassaing (IRDEP), M. Bouttemy (Institut Lavoisier de Versailles), A. Etcheberry (CNRS-UVSQ), D. Lincot, and N. Naghavi (IRDEP)
Cadmium-free buffer layers in high efficiency Cu(In,Ga)Se2 (CIGSe) solar cells have already been obtained via Chemical Bath Deposition of Zn(S,O)1. Electrodeposition is a low cost technique, which allows a relatively easy industrial implementation and the preparation of conformal films whose properties and thickness can be easily controlled. These advantages make the method attractive for the synthesis of buffer layers in CIGSe solar cells. Generally, the sulfur precursor which is used to electrodeposit Zn(S,O) is sodium thiosulfate (Na2S2O3)2. Nevertheless, in our case, this precursor did not lead to good results. Furthermore, to date, no attempts have been carried out to electrodeposit Zn(S,O) buffer layers using thiourea as sulphur (S) precursor. The effect of thiourea concentration (0-1 M) on the electrochemical behaviour and the growth conditions of thin films have been studied on glass/Mo/CIGSe absorbers.

CIGSe being a p-type semiconductor, photoelectrochemical studies were performed on this substrate using a Xenon lamp or a LED panel to electrodeposit Zn(S,O). When CIGSe substrate is enlighten, a cathodic photocurrent appears in the external circuit and the surface electrons react with the oxidant leading to its reduction.

In this work, first, the photoelectrochemical behaviour of CIGSe has been investigated by mean of chopped voltammetry in acidic medium for pH values of 1 and 5 (Fig. 1). The comparison of voltammograms obtained in dark and light conditions allowed the determination of the potential range in which the CIGSe is photoelectrochemically active.

The electrodeposition of Zn(S,O) in acidic nitrate medium has then been investigated using Zn(NO3)2 as both zinc and oxygen precursor.

As the reduction of nitrates locally increases the pH at the interface, thiourea hydrolysis is expected and, consequently, the generation of S2- ions which can react with Zn2+ ions to precipitate ZnS. Simultaneously, Zn2+ ions react with interfacial OH- leading to ZnO precipitation. In order to have a better understanding of the role of thiourea, a thermodynamical study of the system has been carried out at 80 °C showing a strong complexation of Zn2+ions with thiourea. Voltamperometric measurements show that the electrochemical behaviour of the bath is dependent on thiourea concentration. Films were deposited in a potential range of – 0.9 V/MSE to -1.2 V/MSE for different thiourea concentrations on CIGSe substrates and have been characterized through SEM, EDX and XRD analysis. The SEM images show conformal films with a thickness between 1 μm and 7 μm. Fig. 2 shows the surface and cross section morphology for a film obtained at – 0.9 V/MSE for 5 minutes and a thiourea concentration of 0.5 M.

The film growth is very rapid leading to conformal films containing Zn and O as main components and an increasing amount of S proportional to thiourea concentration. Nevertheless, the S incorporation remains quite low. The XRD analysis revealed that the films are composed of well crystallized ZnO. Moreover, these studies highlight the predominant complexing role of thiourea which influences the growth and morphology of the deposited films leading to nanoporous ZnO. In order to have a better understanding of the role of thiourea, XPS analyses have been performed and will be discussed in this paper. 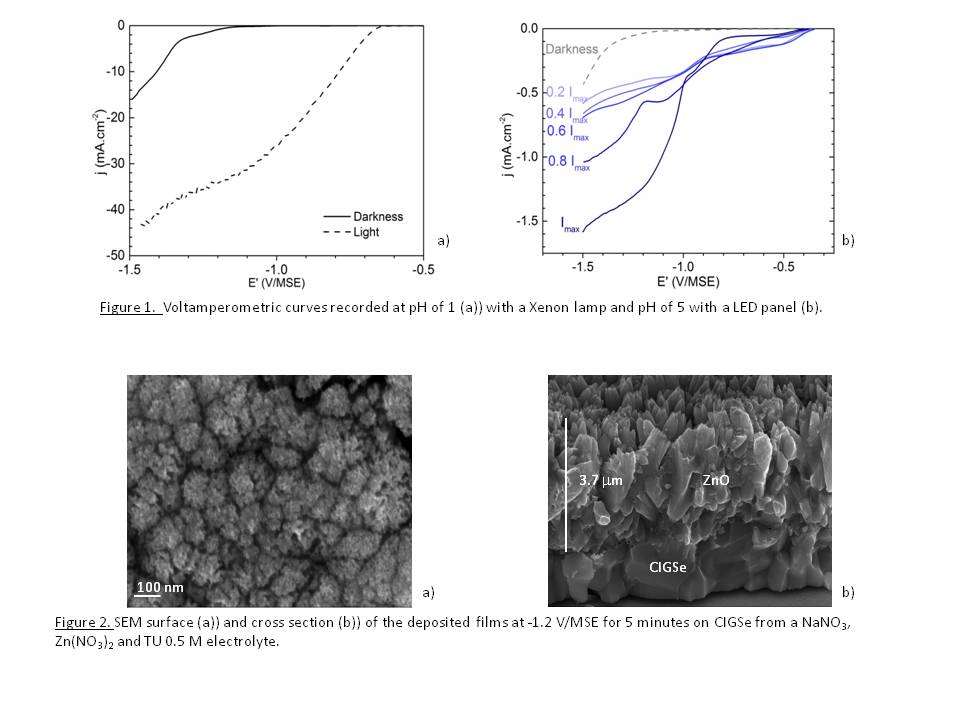