In this paper we present a mechanical analysis of extended and localized UTBB stressors formed with Ge enrichment technique.

Germanium enrichment process can be described as follows. First an epitaxial SiGe layer is deposited on Si or SiGe crystal layer. Then the SiGe film is oxidized resulting in the injection of Ge into the crystal underneath as GeO2 is less thermodynamically stable than SiO2. Along the thermal process self-diffusion occurs in parallel to the consumption of the top part of the crystal resulting in the Ge enrichment of the bottom layer. Oxidation and diffusion phenomena depend on Ge fraction but also on the evolution of the strain field along the process. Similarly the mechanical state depends both on the oxidation and self-diffusion processes but also on the geometrical configuration. To account for these mechanisms we developed a multi-physics model and implemented it in a numerical solver using finite element methodology.

Specific experimental samples as well as real devices have been fabricated following a 14nm UTBB technology flow to study the extended (typically channels) and local (for example self-aligned source drain) stressors formed with Ge enrichment techniques. The samples have then been characterized by combining lattice deformation measurement and chemical analyses performed in a transmission electron microscope (TEM) to provide the estimation of the mechanical strain state.

We first highlight the main parameters that drive the Ge enrichment process (temperature, Ge fraction and mechanical stress…) and calibrate the model on 1D planar structures given a stress distribution directly related to the Ge fraction. We then apply the model to systems in which the stress is not directly correlated to the chemical composition. As an example, we studied the dependence of Ge enrichment kinetics on the substrate stress (SOI versus strained-SOI) with a delayed diffusion due to tensile stress. In 2D and 3 D structures the stress also depends on the geometry of the mechanical system which requires multi-physics methodology for the forming process modeling. The 2D simulation of localized Ge enrichment in source drain region (also called self-aligned in plane stressor, SAIPS [5,6]) is presented in Figure 1 which plots both the variation of Ge fraction and of the stress along the oxidation. At the end of the step Ge is confined in the source drain region aligned with the channel.

To summarize we have modeled and characterized the mechanical efficiency of UTBB stressors formed with Ge enrichment techniques combining multi-physics FEM simulations with advanced TEM characterizations. 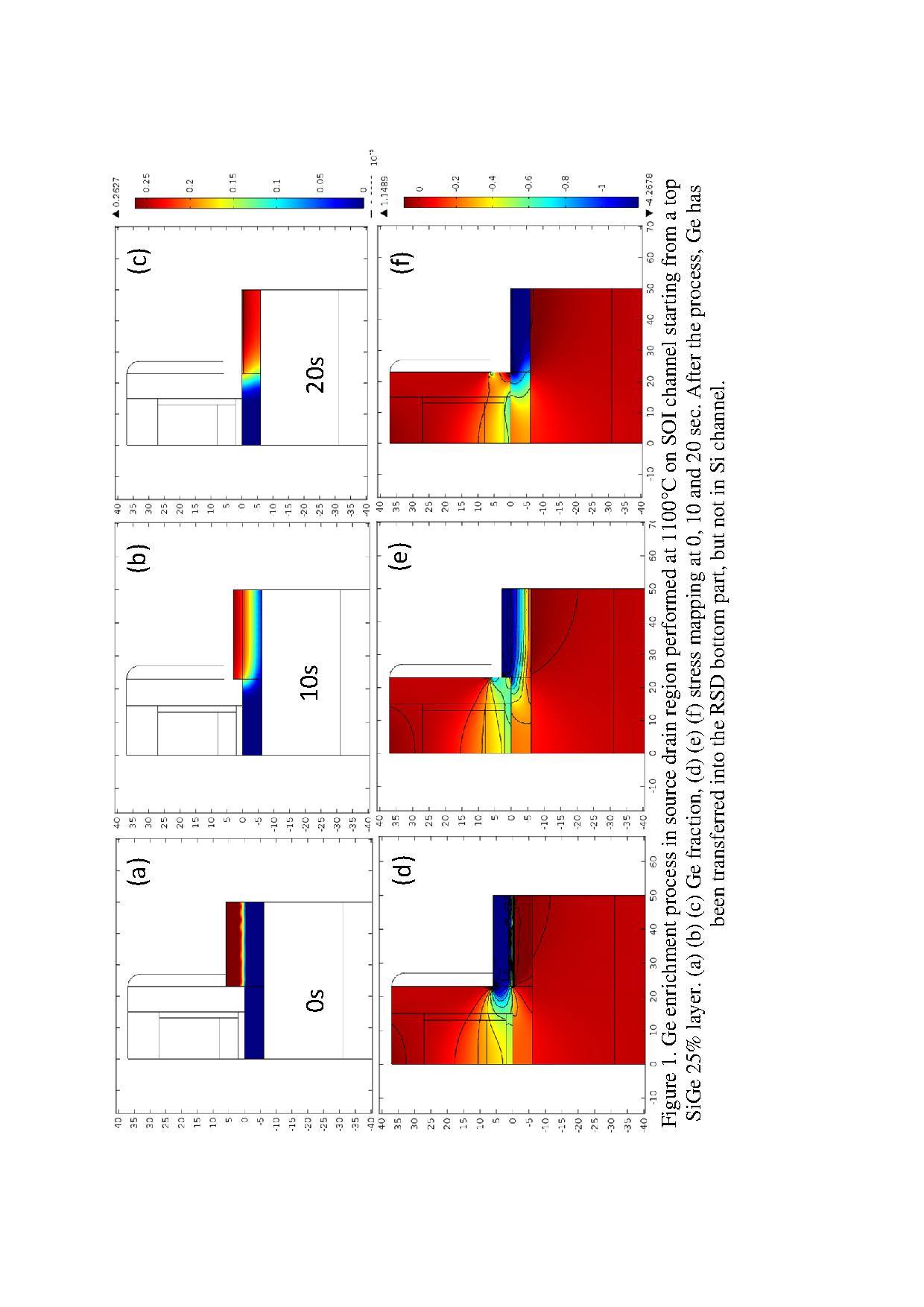