Boulevard Room B (Hilton Chicago)
S. M. Stewart, B. Loong, D. U. Johnson, T. M. Gur, and R. E. Mitchell (Stanford University)
To address growing energy demands while reducing CO2 emissions and the environmental footprint of dirty solid fuels such as coal, it is essential to develop advanced technologies with high efficiencies that also facilitate easy carbon capture.  To this end, converting a solid fuel to clean hydrogen in a fuel cell with spontaneous and simultaneous generation of electricity while producing capture-ready CO2 offers attractive opportunities and advantages. The steam-carbon fuel cell (SCFC) depicted in Fig. 1 addresses this need through higher efficiencies, and because the solid fuel is kept separate from the steam in the cathode compartment by an ionically conducting electrolyte membrane, the effluent anode product gas is a concentrated CO2 stream that is capture ready.  Moreover, due to the downhill chemical potential gradient of oxygen across the electrolyte, steam electrolysis and electricity generation takes place spontaneously under a driving force of > 0.5 V.

Recently our group has published work demonstrating the feasibility of hydrogen production using activated carbon as the solid fuel in a steam-carbon fuel cell.1 While this work has demonstrated the potential of this technology, the ultimate goal is to convert real fuels such as coal or biomass, into clean fuel and electrical energy.  Biomass and especially coal contain a multitude of contaminants, many of which are potent poisons for the Ni-based cermet anodes typically used in these cells.  In particular, the high sulfur content of these fuel sources present a problem, as concentrations as high as 3000 ppm H2S can be generated during fuel gasification, which would be fatal to cell operation. Furthermore, supported Ni-cermet anodes may show susceptibility to H2S poisoning at concentrations as low as 1 ppm,2 making their direct use with these fuels unfeasible.

However, through a two-prong approach adopted in the present work, progress towards the ultimate goal of converting coal to clean energy can be realized. The first prong of our approach involves the use of alkaline-metal based sulfur sorbents3 that can chemically remove sulfur and reduce the H2S concentration to less than 10 ppm. The second prong involves the development of sulfur tolerant anode materials to complement the first and improve anode catalyst lifetime and performance under low sulfur conditions.

Herein we report our progress on advancing this technology.  Through the use of sulfur sorbents that are highly dispersed on the solid fuel, it is possible to dramatically reduce the H2S and COS contents of the syngas in situ and hence, mitigate the sulfur burden on the catalytic anode material.  Moreover, high dispersion makes it possible for high sorbent utilization that greatly reduces the need for the total amount of sorbent used.  Effects of dispersion and carbonaceous support preparation and impregnation on sulfur take up capacity are examined by TGA and gas analysis. Additionally, a variety of perovskite-based candidate materials are studied and evaluated for sulfur tolerance.  Implementation of promising compositions into the membrane electrode assemblies (MEA) is underway; and their electrochemical behavior and impact on fuel cell performance will be presented.

If successful, this work hopes to achieve a large step towards realizing the technology for converting dirty fuels such as coal to green energy, and provides an impetus for better understanding of sulfur poisoning mechanisms, development of sulfur tolerant anode materials, and the most effective means of utilizing sulfur sorbents. Through this technology, it may be possible to take dirty fuels containing high concentrations of sulfur, and convert them into green energy in the form of hydrogen and electricity. 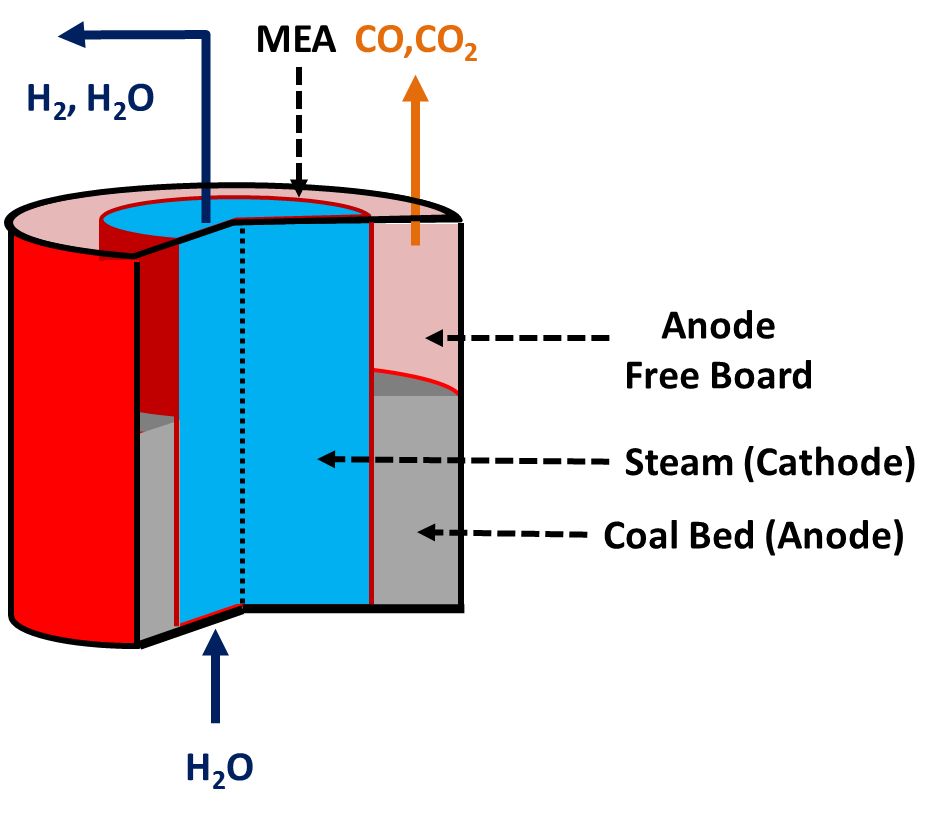