Organosilicon (OS) electrolytes have been developed as a viable alternative to conventional carbonate electrolytes for lithium ion batteries.1,2 A recent trend in the Li-ion industry toward adoption of new materials, including electrolytes, is driven by the desire to deploy larger capacity batteries under broader operating conditions.  In addition, the development of new advanced Li-ion chemistries to meet these requirements often require electrolytes with enhanced thermal and electrochemical stability that provide performance across a wide temperature range. This novel organosilicon chemistry involves the merging of a silane with a lithium coordinating functionality, such as polyethylene oxide units. This combination results in solvents comprised of low molecular-weight molecules and having unique properties including high thermal stability, high flash point, low vapor pressure and relatively low viscosities.

There is a very broad set of applications for organosilanes and thus many possibilities to finely tune the properties that need to be enhanced in a molecule. Our 1st generation OS compounds, including 1NM3, are characterized by a Si-O bond, which is responsible for the excellent thermal stability of silicone polymers and enabled the production of OS electrolytes with high thermal stability. Encouraged by the successful results for “Gen-1” compounds, Silatronix performed mechanistic studies that identified “Gen-2” structural variants that provide even greater stability under more aggressive conditions. “Gen-2” OS solvents have thermal, chemical, and electrochemical properties that surpass those of the original compounds by introducing a less polar (i.e., more stable) Si-C bond, which is less susceptible to attack by fluorinated species, (e.g., HF and PF5).

Silatronix has recently developed and synthesized an entirely new class of OS molecules to provide new (patent pending) “Gen-3” solvents whose thermal, chemical, and electrochemical properties greatly surpass those of the earlier suite of OS compounds. The leading candidate from the “Gen-3” OS structural family is OS3 which showcases greatly enhanced stability and performance attributes when compared to the stable “Gen-2” molecules. Specific examples of performance improvement include higher conductivity and lower viscosity while concomitantly providing superior thermal stability with LiPF6 and enhanced voltage stability at both the cathodic and anodic extremes when compared to both carbonate and previous generation OS solvents. These advanced generation OS solvents represent a new opportunity to dramatically improve high temperature cycling stability, high voltage stability, and safety.

For example, the onset temperature for decomposition of “Gen-2” molecules with LiPF6 is increased by at least 50°C compared to “Gen-1”, with significantly lower reaction rates.  In contrast, OS3 does not show any significant decomposition with LiPF6 up to 175°C (see Figure 1).

In this work, we focus on demonstrating the superior stability and performance attributes of the “Gen-3” molecule OS3. For this we have evaluated the physical properties (e.g., conductivity, viscosity, flash point), thermal and electrochemical stability, and performance in coin cells across a wide temperature range (-30°C to 70°C) with a variety of electrode materials.

*RJH and RW have a financial interest in the outcome of this work. 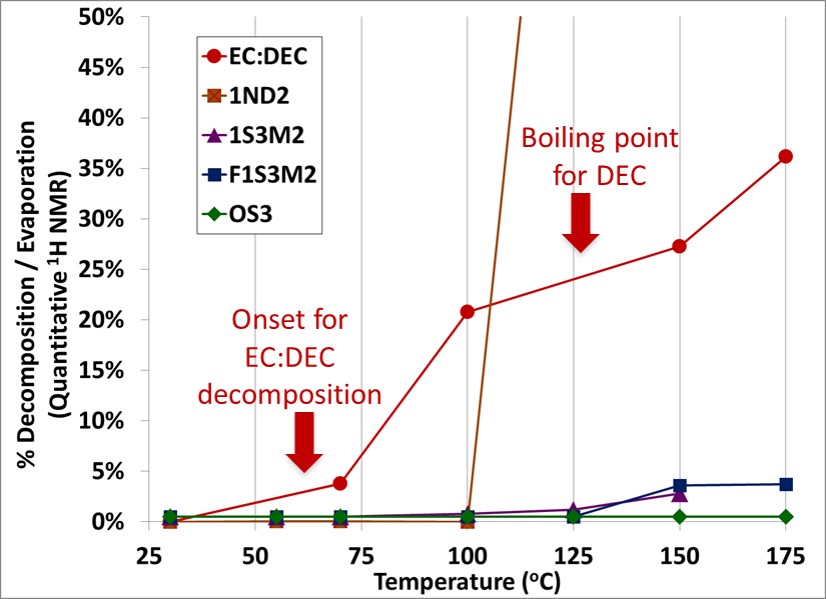