Conference Room 4C (Hilton Chicago)
W. J. Nam, Z. Gray (The Pennsylvania State University), J. Stayancho, V. Plotnikov, D. Kwon (Lucintech Inc), S. Waggoner (The Pennsylvania State University), D. V. Shenai-Khatkhate, M. Pickering, T. Okano (The Dow Chemical Company), A. Compaan (Lucintech Inc), and S. J. Fonash (The Pennsylvania State University, Solarity LLC)
A thin layer of a wide bandgap material disposed between an electrode and an absorber material in a photo-detector or solar cell can play important transport and optical roles in enhancing device performance. When the energy band edges of the materials are properly aligned, the thin layer can control the flow of photo-generated carriers preferentially: i.e., it can permit   the transport of one type of carrier while blocking the other type.1 Further such wide band gap materials can affect light trapping.2 NiO is a p-type conductive oxide, and has, due to its band edge positions, a high potential as a hole transport-electron blocking layer (HT-EBL) material. Due to its wide bandgap, it is also a transparent material. Both the potential transport and the optical roles of wide bandgap thin film materials in opto-electronic devices require the ability to precisely control film deposition thickness and conformality. In the case of HT-EBL candidate materials, atomic layer deposited (ALD) NiO has proven to have the material properties and excellent deposition control potential needed for hole transport and electron blocking optical layers. Because of this ALD NiO has become a subject of research in many research groups.3-6

In this report, we demonstrated the usefulness of ALD NiO thin films as HT-EBL/optical material by using it in very thin CdTe solar cells with a superstrate configuration. The CdTe cells were fabricated on a soda-lime glass substrate, and configured with layers of 200nm of SnO2:F/ 50 nm CdS/ 500nm CdTe/4nm Cu and 20nm Au. In test samples, a 3nm thick ALD NiO layer was deposited on the CdTe layer before the Cu/Au deposition. The resulting test and control cells were characterized under AM 1.5G (100mW/cm2) spectrum. The results of the device performance are summarized in Table 1. As may be noted, the CdTe cells with the ALD NiO layer on the anode showed better Voc and FF, and resulted in 15% higher power conversion efficiency (PCE) than that of the control cells. The enhancement of the Voc and FF were ascribed to the enhanced control of the photo-generated carriers. It remains to be determined if the reduction of. Jsc in the test samples is due to optically non-optimized NiO thickness and therefore reflection loss at the back contact or to non-optimized hole collection at the back contact. 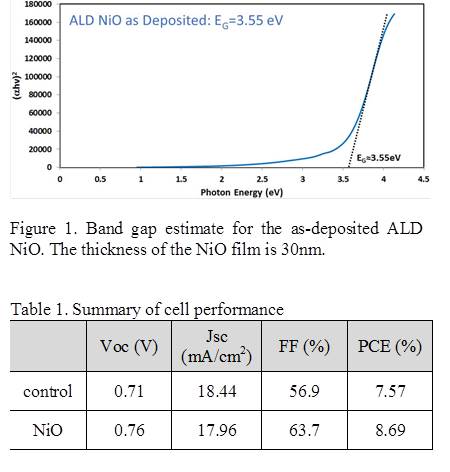