Continental Room B (Hilton Chicago)
S. S. Damle, S. Pal (University of Pittsburgh), P. N. Kumta (University of Pittsburgh, Pittsburgh, PA 15261), and S. Maiti (University of Pittsburgh)
Lithium ion batteries with improved capacity and cycling performance are being envisaged as the most promising energy storage device for applications ranging from cell phones, laptop computers to car batteries. Tremendous research effort has been directed towards finding better alternatives to traditional graphite based anodes in Li-ion batteries that exhibit a limited capacity of ~370 mAh/g. Amorphous Si (a-Si) thin film have showed promise as the next-generation anodes for Li-ion batteries due to their high electrochemical capacity (~3600 mAh/g) [1]. However, the colossal volume expansion induced stresses leads to delamination of the thin film from underlying current collector rendering the anode non-functional.

To suppress the thin film delamination, researchers have created patterned a-Si thin film anodes with width less than the average crack spacing observed in the continuous a-Si thin film anode. Another approach that has not received much attention is the multi-layered engineering of current collector. Datta et al. [2] have shown that insertion of soft layer of carbon between the Cu current collector and a-Si thin film improved the mechanical integrity and capacity retention of the electrode. Choi et al. [3] further demonstrated a current collector made by coating porous polyolefin polymer membrane with a thin layer of Cu. Polymer membrane has also shown to provide flexibility to the current collector, which assists the electrode performance by allowing it to freely expand and contract during electrode cycling. Thus, presence of soft elastic layer along with the current collector and Si thin film can enhance the anode system performance. However, detailed knowledge of the various mechanisms operative in the presence of soft elastic layer is still not very well understood.

We have developed a multi-physics based finite element framework to study the influence of different design parameters on the mechanical integrity of patterned Si film based anodes [4]. This model will be utilized to predict the effect of insertion of the thin elastic buffer layer and other design parameters on the mechanical performance of the patterned anode under electrochemical cycling (Figure 1). The energies associated with the dissipative and non-dissipative processes will be quantified to explain the role of various mechanical events during electrochemical cycling. Qualitative comparison of the executed simulation studies with the experimental results will be made. Outcomes from this study are expected to aid in the fabrication of improved a-Si thin film patterned anodes.

The authors would like to acknowledge the financial support from the US Department of Energy’s Office of Vehicle Technologies BATT program (Contract DE-AC02- 05CHI1231), sub contract 6151369, and the National Science Foundation (CBET- 0933141). PNK would like to acknowledge the Edward R. Weidlein Chair Professorship Funds for partial support of this work. In addition, PNK and SM would like to thank the Center for Complex Engineered Multifunctional Materials (CCEMM) for providing a graduate fellowship to perform the simulation experiments reported in this work. 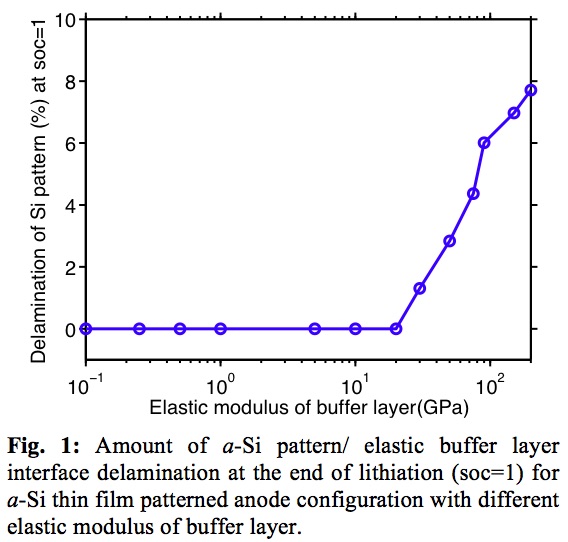