Recently, thin-film transistor (TFT) with InOx-based metal oxide semiconductors such as Ga-In-Zn-O (GIZO) [1], In-Ga-O [2], In-Sn-O [3, 4], and In-Zn-O [5, 6] have attracted attention as high-speed switches for next-generation flat-panel display. However it remains a big issue of the anomalous oxygen vacancies (VO) formation, which destabilize the electronic properties. We have previously investigated In-Ti-O [7], In-W-O [7-9], and In-Si-O [7, 10] systems to suppress VObecause of high bond dissociated energies between each element and oxygen such as Ti-O (667 kJ/mol), W-O (720 kJ/mol), and Si-O (799 kJ/mol) [11].

Although C-O has the highest bond dissociated energies of 1076 kJ/mol [11], CO and CO2 are gases at standard ambient temperature and pressure. So we tried to fabricate carbon-doped In-Si-O (In1-xSixOC) semiconductor films using co-sputtering method with SiC and In2O3targets.

A 100-nm-thick thermal SiO2 film was formed on a p-type Si substrate. Next, 50-nm-thick In1-xSixOC films were deposited on SiO2 film at room temperature by co-sputtering using In2O3 and SiC target under an Ar/O2 atmosphere at 0.2 Pa with various oxygen partial pressures (PO2 = 0 ~ 0.08 Pa) at room temperature. The Si content (x=0.12 ~ 0.32) in In1-xSixOC films was controlled by changing DC the sputtering power of each target. Then, the post deposition annealing was performed at 250 ~ 600 °C for 1h in air. Finally, Au (100 nm)/ Ti (10 nm) electrodes were deposited by thermal evaporation method for hall measurement.

The carbon content, structure and surface morphology of In1-xSixOC films were examined by XPS, XRD and AFM measurements, respectively.

Characteristics of the In1-xSixOC film

Figure 1 shows AFM images of as-grown, 250 °C and 600 °C annealed In0.8Si0.2OC films. The root-mean-square (RMS) values of all samples show small values of 0.43~0.61 nm. We found that the In0.8Si0.2OC films have smooth surface even after annealing at a high temperature (600 °C). We also confirmed that the film was kept to be amorphous structure after annealing at 600 °C by XRD measurement. From the XPS measurement, a large C1s peak was observed due to Si-C bond at around 285 eV in as-grown and 250 °C annealed In0.8Si0.2OC films. This indicates that carbon sufficiently introduced into In-Si-O films using co-sputtering method with SiC target.

Electrical properties of the In1-xSixOC film

We studied characteristics of the In1-xSixOC films, which fabricated by co-sputtering method using SiC and In2O3 targets. We found that the In1-xSixOC film had an amorphous structure, smooth surface morphology and Si-C bond formation. The In1-xSixOC film is one of promising candidate as metal oxide channel materials because of high hall mobility of about 20. 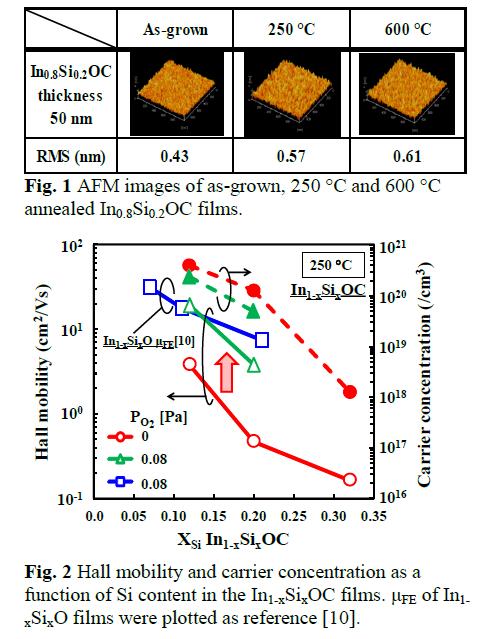